The Trial of Billy Running Dog 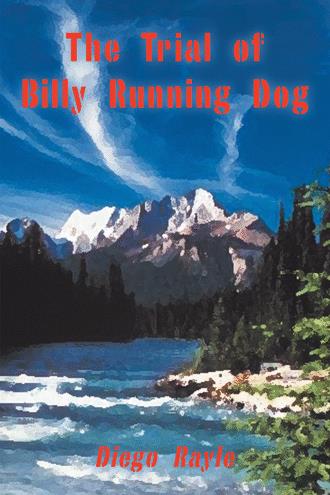 The telephone began to ring as Geoff Hanes was placing two stainless steel bowls down onto the kitchen's speckled linoleum floor. Hanes eyed the voice transmitter with a dispirited glare while scratching the top of his head. His shoulder-length black hair, unwashed, unruly, and flecked with gray split-ends, was tied back in a ponytail.

"C'mon, Zo. Yum yum eat 'em up," he said, waving at the telephone as if it were an annoying gaggle of Bible-toting Jehovah's Witnesses banging at the gates of his decaying fortress.

Zolotl Blue, a one-year-old pedigreed German Shepherd, was the offspring of King's Black Shadow and Bridget Girl. They were two well-bred animals with gentle dispositions and handsomely pronounced markings. Hanes named the saddleback black and tan pooch after an Aztec canine deity. The dog was doe-eyed with huge paws and at full maturity would balloon to well over 100 pounds. Its howls ripped through the flimsy-walled cramped quarters of Hanes' one-bedroom lodge like a woodland warrior whooping at a twilight ritual dance.

The antique rotary telephone began ringing again. This time Hanes threw up both hands and surrendered to its ancient monotone ring.

"Hello," he mumbled, picking up the receiver with both hands.

"Geoff, hello," said the voice on the other end.

"Geoff... is the medication helping?"

"Shit, doc. You can say it. Prozac. Yes, I'm getting some relief from it. I'm Prozac Man twice in the morning and twice at bedtime. Every day, seven days a week... 365 days a year."

"Yesss, sir, three bags full," he admitted, biting down harder on his bony digit until it started bleeding.

"Geoff... is your life less chaotic? Has an acceptable level of order prevailed or should we resort to massive doses of lithium again?"

Hanes, fidgeting, lapsed into never-never land. He had nearly perished from a lithium overdose three years ago. He suffered limited brain damage and temporary paralysis of his upper limbs for six months. Then, he was an ardent anti-lifer and battled self-destructive urges regularly.

Overcome with despair from the nagging memories of that sorrowful day, he unthinkingly slipped off his silver wire-rimmed glasses. He moaned and started a crying jag that sent tears streaming out his dull eyes.

"Geoff, do not be so God damned melodramatic. Now, it is time to sing ‘London Bridge’."

There was a moment of unsettling silence.

Hanes wept, turning his head right, then left. "Geoff is not happy."

"Geoff. Just do it!" Burwell commanded in a grating voice. It was a chilling utterance that made the eight metal rods implanted in Hanes' recently reconstructed left humerus bone quiver.

Burwell jumped in. "Geoff, that was an exceptional rendition of a song that we all love and cherish."

"Geoff, I'll call you again in one week."

Hanes slammed the receiver down onto the cradle of the telephone and let out a shrill perverse scream. He hacked twice and sent a stream of ugly, thickset, brownish phlegm zipping across the room with the velocity of a hand-thrown bullet. Hanes, like an edge-hopping crazy, looked right, then left, then right again, then left again. He let out a wheezing snort as he exited the house in an agitated rush.

It was a down-to-the-bone cold February afternoon in the heart of the Corn Belt. The temperature had been at zero since the break of dawn. A cutting west wind had been blowing powdery snow across the ice-sheeted main and secondary roads for five straight days and nights. Seven-and eight-foot-high snow drifts lined both sides of the roadway.

The winter months in Northwestern Ohio had become much milder over the course of the last five years--due in part to a cyclical shift in the jet stream. A brutal Arctic blast from Canada had moved into the area Sunday and was slowing moving eastward. Temperatures had plummeted to all-time lows during that brief encounter with the "frozen hell" sent special delivery from America's neighbor to the north. A recorded minus 20 degrees Tuesday night was responsible for the death of a score of homeless people and elderly folks, hundreds of clunker cars, and a wagon load of domestic pets.

Geoff Hanes' trek out into the tundra-like climate was a routine and monotonous one. Every weekday at 3 p.m. he jumped into his forest green 1972 VW Beetle and headed off to work. His classic VW, "Buddha" as he called it, moaned and groaned when he turned the ignition key and attempted to crank the engine to life.

"Ommmm... oommmm... ooommm," he chanted, slumping forward ever so slowly. "Come on, Buddha. Don't let these tumbling temperatures bother ya."

The secondhand, eight-dollar, 19-start battery severely weakened from the sub-zero weather, turned over on the fourth try. Fifteen starts left. A choking wisp of black smoke blew out of the single exhaust pipe and the four-cylinder engine began purring like a kitten with the hiccups.

In a word, Rayle's novel, The Trial of Billy Running Dog is fearless. This is the portrayal of a man who is caught in one of the many shades of gray labeled by ethnic definition of the world in which we live, Billy Running Dog has been painted into a corner by a society that cannot or will not accept his definition of himself. A "breed," Billy Running Dog is a man who fits no public profile – he is part American Indian, Mexican and white. In addition to his multi-ethnicity, Dog is also a Vietnam veteran, casting him a three-time loser by circumstance rather than design. This could even be called an effort to once again prove the old adage that "the sum of the parts is greater than the whole."

A tormented man who leads a double existence, one as an unreliable and unstable school janitor, and another as a successful author who has the capacity to step outside himself and view the world from a perspective of simple spirituality, Billy Running Dog pulls no punches and spares no feelings in a society made up of black and white issues. He learns through self-discovery the old-world simplicity of spirituality, and earns a place of inner peace that few even dream of in their personal versions of Utopia, let alone attain.

The gritty descriptions of friends, society and situational crime in this novel are vivid and stark, as is the author's no-holds-barred answer for modem-day criminals who would prey upon those less fortunate or, more importantly, the under-armed who choose to trust in the goodness of man rather than escalate the local version of the arms race to a personal level.

The most important part of this refreshing work is that Billy Running Dog is never a victim in any definition of the word. He makes no excuses for his behaviors or thoughts. He is sometimes bitter at the injustices foisted upon himself and others in his particular brand of hell on earth, but never to the point of blaming someone else for his troubles.

Passages in this book are brilliant in their vibrancy and provoke many bouts of philosophical thinking and reflection about the world in which we all must live. The simplicity with which these concepts are conveyed smack of truth, real truth. Rather than rely on hackneyed phrases and concepts, Rayle is an original and unique author who speaks his mind as it pleases him to do so. There are many times in this book when veterans would feel again the rage against a government who send them into harms way for the greater glory of the country only to be shunned when the job was done for them. Trivialized by the general public, abused and ignored by the Department of Veterans Affairs, and generally viewed as psychotic killer-wolves loosed upon the sheep of modem society, Rayle illustrates the pain and hypocrisy incurred by veterans upon their return from a tour of duty with the pin-point accuracy of a cruise-missile strike.

Diego Rayle is a man who will never appear on a daytime talk show to blame society for his treatment at their hands. He is nobody's victim – an extremely rare find in a world filled with those who seek self-esteem, validation, and empowerment from an outside source. Rayle has found and tapped the one true source for these things and more, himself. This book is a must read for everyone who isn't afraid to venture into the realm of introspection.

Diego Rayle is a Latino/American Indian author. His great-grandmother was a full blooded Mescalaro Apache. His Native viewpoints are cemented in stone and he travels full circle to convey his perception of what it is like to be an urban Indian in today's society. The Trial of Billy Running Dog is a highly controversial book and he delivers his insights with extreme precision.

Rayle is a peace activist and tours around the country to foster his theory of peace without conflict. His writing credentials include the books Stay Out of the Wheat Field and Cast From Shackles. His unwavering belief in the Great Sprit has enabled him to discover his own version of Utopia.