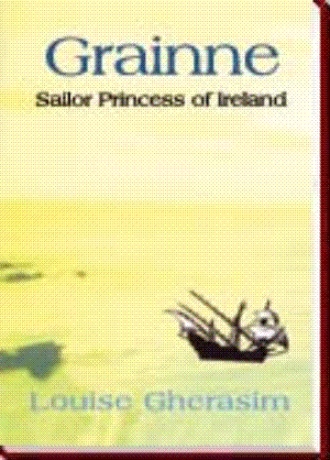 The small girl stood on the headland. The outcropping of jagged black rocks contrasted starkly with the bright saffron of her long woolen skirt and ivory bodice. Grainne didn’t like girl’s clothes. She usually wore trews. But when she was forced by her mother to wear a skirt, as she was on this special occasion, she always hitched it up like a baggy breeches. This gave her freedom to run and jump and ride her pony.

For the past month, she had been carefully wiping off the days on her slate calendar. Now that she had cleaned off the last day, she had raced to the headland and stationed herself in her present position.

Hour after hour, she waited. Searching the mists with anxious dark eyes, she sought to penetrate the grayness for sight of her father’s vessels.

Her heart rose and sank with the billowing waves as an emerging blob became no more than a fisherman’s curragh returning with the day’s catch.

She could not tell the color of the sky. Only the color of the sea, she knew. Gray and black and blacker hills of white-topped water. Not even the islands, those closest to her father’s land, were visible. For the fog was thick and covered the whole world, even reaching across the bay to her home, the stone fortress of Belclare.

Yes, Grainne Ui Maille, Grace O’Malley in the English tongue, was, at eight years old, very familiar with the colors of the sea. She knew them in all their various hues. She knew the happy tints and the bad-tempered shades. For Grainne, like her seafaring father, was a child of the sea.

Hoarse throated gulls circled overhead but no other sound broke through the constant pounding sound of the breakers.

She was born hearing the song of the waves, had spent her early childhood playing in the crystal eddies, and had ridden the rolling breakers in the bay many times in her father’s ships.

Father! The word brought warm feelings to little Grainne. She worshipped her father, Owen ‘Dubhdarra’ (Black Oak) O’Malley, who was chieftain of the Barony of Murrisk, a large stretch of land on Ireland’s western seacoast.

Suddenly, her heart missed a beat. She was afraid. It was growing late. She felt the chill in the air that told her that the late autumn sun was low on the horizon behind the fog.

What if her father did not return? She had heard of the fighting that sometimes took place out on the sea. No sooner had the thought occurred to her than she knew what she had to do.

Leaving her lookout on the promontory, she ran, past the stone fortress to the Murrisk Abbey looming large and forbidding through the fog, and right to the church. The huge wooden doors were open. But it was very dark within. Only the beeswax candles burned in the sanctuary giving a faint flickering light. The main altar was scarcely visible.

Grainne knew that God lived in the little house with the golden door which occupied the center of the altar. She knew because the good Father Abbot had told her. And her soft-spoken mother, who attended the services regularly, also reminded her to be on her best behavior when in God’s Presence.

She also knew that her grandparents for several generations were buried in this church, for she had read their names on the stone walls. In fact, the abbey had been built by her family in 1457 for the Augustinian Friars. But this evening she did not have time to think of these things; she had more immediate concerns. She had to remind God that her father was on his way home. Perhaps he needed God’s help at that very moment. If God could do everything, as Father Abbot had said, then He surely could bring her father back safely that very night.

A soft rain had begun to fall when Grainne emerged from the dark interior of the church. It was growing dusk but she was not afraid and immediately ran back again to her lookout. She seated herself on a large flat rock. The grumbling sounds in her stomach told her it was long past supper time. She had risen before everyone else in the large household and had run off without her breakfast. How could she eat? She was too excited. It had been such a long time since she had seen her beloved father. Now she wanted to be the first to see his galleys as they sailed gracefully between the islands. In her mind’s eye she could imagine their huge sails full and white above the ash-gray scudding clouds on the horizon. This was the day, she felt sure, that she so long awaited: the day her father would come home from the sea.

Her father, Lord of Upper Umhall, was king of the seas. It said as much on the Blue Ensign at the masthead of the Santa Cruz, her father’s ship: Terra Marique Potens –

Born with the sea in her veins, Grainne is never happier than riding by the ocean, swimming, or traveling across it in her father’s Caravel to trade with Spain.

As the daughter of a noble chieftain, she is expected to behave "correctly". But Grainne cherishes freedom – her own, and that of her country from the invading English.