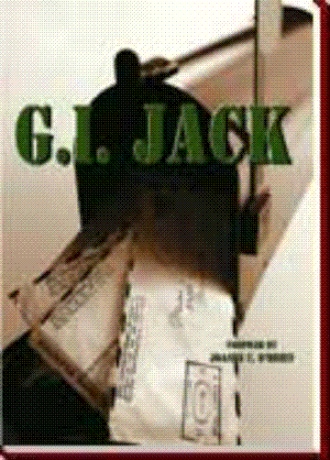 There were 5 of us in the Jeep. We took off through the jungles. There was a sort of road that wound and twisted through the jungle. It was more of a trail than a road, but at least there was room between the trees to get through. There was every kind of tree, bush, vine and grass one could possibly imagine. The bushes, grass and vines were brushing along the sides of the Jeep most all the way. They really have some grass over here in this part of the world. It looks very much like regular grass back home. In lots of spots the blades get about an inch and one half wide and 6 to 8 feet tall. It grows just as thick as your lawn back home, but would be quite a task for the average lawn-mower to cut it down. Guinea grass is the name of the stuff.

The going was pretty tough. We had to use the low range gear and 4 wheel drive all the way. We ground through muck and sand and bounced over roots, rocks and logs. We drove through rivers and even made our own bridges across some. We went up hills so steep it seemed as if the little Jeep would turn over on its back. We went through some high country where we could get a view for miles out over the jungle and ocean. They were beautiful and priceless views and sure made me wish to hell I had a bunch of film. We went to one native village right on the coast. They had a couple big out-rigger canoes pulled up on the beach. It was most interesting.

The natives naturally gathered around us and had to give us the once over. All of them had big knives, even the kids. The Chief could speak some English and some of the natives could say a few words. They asked us for cigarettes. They are crazy for cigarettes and for a pipe they would just about give us the entire village. They were going to give us coconuts and all that sort of thing, but we planned on going on a little farther. They will salute any kind of soldier; they are not fussy. Some guys that have been there before taught them to cuss. The Yanks taught the natives to cuss the Japs in particular, so when we asked them how they liked the Japs, they cut loose with a beautiful display of cussing. We would get a kick out of it and so would they. They would cut loose with a cussing volley and then suddenly stop and then would laugh and laugh. There are very simple and seem to get a kick out of most anything. They will keep poking one and saying "Me friend, me friend!" until one gives them a cigarette. Most of them don’t know how to smoke a cigarette. They cough and choke and sputter to beat hell, but they are strictly big stuff when they have a cigarette.

We drove on into the interior and visited a few more villages. Some of the villages were located in nice clearings with tall palm trees planted here and there. Their houses are built on posts and the floor is about 5 feet off the ground. They are open at both ends and the roofs are made of poles covered with palm leaves all tied together with grass and vines. They are built off the ground for protection against snakes and crawling insects and dry rot. This is wicked country and one doesn’t live long here. Even the natives rarely live more than 35 years. If a native is 35 years old, he is an old geezer. Most of the women do the work. The men don’t do a damn thing. There is not much activity of any kind in the vil-lages. These natives were formerly headhunters and looked quite vicious as a lot of them have their teeth filed to sharp points. A lot of their teeth are black and rotten. Quite a few of them are covered with ringworm and a lot of them are covered with scales which is dry rot. It seems to be something like leprosy. The natives smell quite a bit and their houses and quite filthy and full of lice. There are a lot of bananas and pineapples to be had and after talking to the Chief of the last village we went to, he yelled around a little and some of the women came over to us with stalks of bananas and pineapples piled on their heads. I don’t know how they manage to balance such a big load on their heads, but they do. For half a package of cigarettes, I got a stalk of bananas. We got a bunch of pineapples and lemons and limes and a few grass skirts, too. I had all good intentions to sending you a real grass skirt, but the censor said no, so that’s that.

The drama of four and a half war torn years in the Army Field Artillery comes alive in the memoirs of G.I. Jack O’Brien, a lovable young Irishman, as he shares his heart with his fiancée, Joanne, in over 400 love letters. From boot camp to the Pacific jungles, to honorable discharge, his colorful stories testify to the making of a man, a nation and the greatest generation.

G.I. Jack is a born storyteller, and his Irish wit and humor shine in his tales of Yankee O’Brien vs. the Tennessee National Guard and the enlisted men’s antics vs. Army officers. Accounts of daily heroics and survival tactics in the steaming jungles are spellbinding. His love letters vibrate with passion, vivid descriptions and sometimes striking truth.

This book is pure history, including an account of the war on the home front and other theaters of WWII. His collection of war memorabilia, photos, and post-war documents add to its authenticity.

Sharing in G.I. Jack’s WWII memoirs is truly a comprehensive, moving experience of the Pacific war, up-close and personal.

Joanne Nack O’Brien, the recipient of G. I. Jack’s love letters became his wife for forty-five years until his death in 1991. Having saved Jack’s love letters for over fifty years, until 2000, she compiled them into a lifetime story as a Christmas gift for their children and grandchildren.

Joanne created this book of memoirs from over 400 love letters, correspondence from the home front and war buddies, war documents, their combined war memorabilia and family photos.

She credits G. I. Jack’s Irish wit, humor, and natural story-telling ability as the backbone of this historic tale, but it is her dedication and skill that weaves this fascinating story into the portrait of a man, a nation, and a generation.