Floyd, Lance, and I Bike Cross-Country 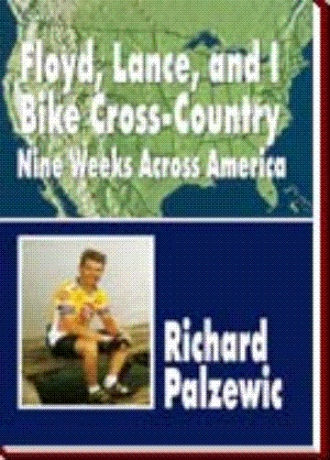 A Day of Infamy

Weather: Cloudy, rainy, and cool, with a 25-mph headwind, and temperatures near 50.

In his book, "It’s Not About the Bike," Lance Armstrong says, "Pro cycling is so hard that you can’t even stop to take a ‘piss’."

I can’t think of a better quote under the circumstances.

Cycling is a hard sport--very hard.

July 18, 2000, was unequivocally the worst day I’ve ever spent on a bike--possibly the worst day of my life, period. There was absolutely no reason to be riding this day. It was the only day the entire trip that I didn’t want to ride. It took every ounce of my strength to finish.

Before I went to bed last night, I could hear the rain pounding on the metal roof of the Expo Center. I hoped and prayed that it would stop by daybreak--it didn’t.

The weather was absolutely deplorable. The temperature didn’t get above 50 and it never stopped drizzling all day. The rainy weather also turned the roads into a quagmire. Add to the mix a 25-mph headwind and it became an impossible day--almost.

It should have been a pretty ride along the Missouri River, but I can honestly say I didn’t look at it once--I didn’t care. I was too busy pedaling with my head down concentrating on the job at hand. I still hadn’t fully recovered from my sickness either, so that made matters worse.

Eighteen miles out, I got a flat tire. After changing it, I realized that I had packed only one spare tube (I usually pack two). It was just another thing to add to the list on an already difficult day.

At this point I remember slouching over my bike for a minute and asking myself, "What in the hell are you doing out here?" I still don’t know if I can tell you the answer.

Cyclists hate headwinds and this was a nasty one. I was in my lowest gear (39 x 25) and it still wasn’t enough. It’s very demoralizing to a biker when your heart feels ready to explode, and you look down to search for a lower gear and it’s not there. Going 12 mph didn’t help the morale either.

Surprisingly, I didn’t feel too bad physically, but I soon found another potential problem. I hadn’t taken into account the stiff headwind at breakfast, so I quickly realized I might not have enough energy to make it to lunch. There were no towns enroute, so I was in serious trouble. Normally after a good breakfast, 50 miles on a bike is no problem, but this was no ordinary day.

For every problem I found a solution. Somebody was definitely looking out for me.

After traveling 30 miles, a van pulled up along side me. It was a couple of riders who had chosen not to ride that day because they still hadn’t recovered from their sickness. They gave me all the food they had so I could continue. I’m convinced that without their help, I wouldn’t have made it.

I was also underdressed once again. I was wearing a rain jacket, but I should have worn tights and booties.

After four long hours and 50 miles of riding, I reached the lunch spot. Fearing hypothermia, I didn’t stay long. Taking off, I noticed a sign that Cycle America had painted on the road that said, "Miller – 45 miles." My heart sank. I thought I couldn’t possibly make it that far, but I trudged on.

I kept thinking it was all a bad dream, and that there was no way a day could be so ugly. It had to change, but I knew it wouldn’t. I tried making excuses for the weather and the difficulty of the day, but I didn’t have time for that. If I used my energy that way, I wouldn’t have the energy to deal with what I really needed to deal with: getting to Miller, South Dakota, as fast as I could.

The next 45 miles were perhaps the longest of my life.

For the first 25 miles, I was in la-la land, not knowing who or where I was (like a dream). It was the one time on the trip that I was afraid to be alone. I thought about waiting for someone at lunch, but I just wanted to get done.

Cycle America made a few route changes at lunch, so I wasn’t even sure I was going in the right direction. The roads were so desolate and rough, that I thought I had to be going the wrong way. I didn’t see one car in those 25 miles. I kept wondering how long it would take before my legs would seize up and quit working.

It was here that I wondered what my family and friends were doing back home. I wished I could have seen them--or better yet, they could have seen what I was going through. If there had been a phone around, I would have called and told them to think about me. I guess I wanted someone to feel sorry for me. (I told one of my sisters that it’s the only day in my life where I’ve ever felt sorry for myself.) Even though they had no idea what was happening to me, I imagined they did, and it helped me make it through. My mother recently told me that she prayed for me every day; I know the power of prayer, because it got me through this day.

At mile 75 I turned north on South Dakota Highway 45 and the wind eased somewhat. I remember letting out a huge "whoop" when I reached 15 mph, because I was so happy. I also remember chuckling to myself as I realized no one was probably within five miles of me.

With 15 miles to go I stopped the service van and got a spare tube. I knew I was too cold to change another flat anyway, but my stress level went way down.

Three miles later another support vehicle stopped to check in with me. They could see my pain, but also my determination. The van was full of riders who had cashed it in for the day and I can’t say I blamed them.

Floyd, Lance, and I Bike Cross-Country

, is a "live vicariously through me" adventure book about a teacher’s bicycle journey across the United States in the summer of 2000. It includes information on how to get started, historical information of the areas ridden through, advice on fitness, cycling tips, and funny stories; and of course, plenty of information about Lance Armstrong, and how he helped the author get through the summer.

The reader needs to take a different perspective when reading this book: you have to put yourself in the author’s shoes, and live vicariously through him so you can see the country from the seat of a bicycle; experience the sore muscles and the fatigue; the heat, cold, the rain, and the exhilaration of going 50 mph; be there with him as he rides his bike seven hours into a 25-mph headwind, all while consuming 6,000 calories a day; ride up a mountain pass, and change a flat tire; last but not least, you need to feel lonely, so you can experience what he did to the fullest. If you can do all this, then you’ll travel coast-to-coast on the seat of a bicycle.

Richard Palzewic grew up in the rural community of Wallace in the Upper Peninsula of Michigan with his parents and six sisters (a topic for another book). He graduated from Northern Michigan University in 1995 with a B.S. degree in elementary education. Richard is currently teaching and coaching in Rhinelander, Wisconsin, and completing course work on his Master’s Degree. In his spare time, he likes to bike and cross-country ski. He biked across the country in the summer of 2000, and has aspirations of competing in the Race Across America (RAAM) during the summer of 2004. Richard has also participated in North America’s largest cross-country ski race, the American Birkebeiner, four times.