Living in the Moment

A Guide to Living a Full and Spiritual Life 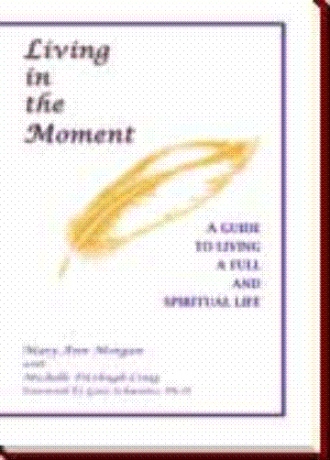 Like most mornings, I had spent the past half hour playing "tag, you're it" with my alarm clock. Shortly after hitting the snooze button for the last time, my television came on, forcing me to give up the idea of sleep.

Time to get up and go to work. Time to get the kids ready for school. Time to begin another day, not all that different from the one before. Within seconds, I realized that this day would not be like any of the ones before.

As my eyes adjusted to the TV’s light filling my bedroom, I saw what seemed to be black smoke pouring out of two factory smoke stacks. I thought it strange that the morning news would show this, but as I read the words "Breaking News" at the bottom of the screen, I figured they must be on fire. However, it was the words below the bulletin that caused me to sit straight up in bed and take notice.

it read. The World Trade Center in New York? Once again the twin towers were the site of a terrorist bombing?

It took me a few minutes to realize this was more than a bombing.

It took only a few more to understand that within the flash of a moment, the world had changed forever.

It was my spiritual guide One Feather who told me to write this book. While many souls have used my body as an instrument and my voice as a tool to guide and prophesy, he has always been the most prominent.

The first of these messages, Living in the Moment, is not unheard of nor is it difficult to understand. It is something we say, in some variation, to one another often. However, like so many things around us, we ignore its meaning. We don’t realize it is more than just words, but a message from a Higher Power, the Highest Power.

Spiritual medium and messenger Mary Ann Morgan, and journalist Michelle Fitzhugh-Craig, have joined forces to bring to the world a message of peace, unconditional love and understanding.

Living in the Moment

is more than a guide to living a full and spiritual life. It is an invitation to open your hearts and your minds, and share them with someone else.

From the time she was a small child, Mary Ann Morgan has been able to communicate with what she calls "those on the other side."

As she grew older and her spiritual experiences continued to unfold, Morgan realized she was put on this earth for a reason. She realized that the gifts she was given were to be used for a very specific purpose. She was taught that every human life is precious and holds special meaning. Contrary to what many people may believe, life is not a random accident without purpose and meaning. All life is sacred and plays a part in the Grand Design.

In 2001, she established the Mary Ann Morgan Charities Program*, a unique public service dedicated to bringing funds and resources to already established institutions that are constantly struggling to meet their goals of service to their neighborhood and communities. Large portions of the funds raised are done so through speaking engagements.

Morgan also works with law enforcement agencies throughout the country. Her determination to locate lost children and assist in cases involving crimes committed against children is a major part of her mission in life as well.

Morgan has appeared on national radio and television programs including Nightline, Discovery Channel, MSNBC and Odyssey.

The mother of three children, Morgan divides her time between Arizona and Oklahoma.

Individuals wishing to contact Morgan concerning her charities program can do so by visiting www.maryannmorgan.org or by calling (480) 857-2587.

Michelle Fitzhugh-Craig is a reporter with The Arizona Republic newspaper in Phoenix. She joined the Republic in 1998 shortly before graduating from Arizona State University with a Bachelor’s degree in journalism, with an emphasis in business.

As a news reporter and feature writer, Fitzhugh-Craig has worked several beats including features, news, cops, entertainment and local communities. In May 2001, she received an Associated Press Managing Editors award for a humorous column published in The Rep, the Republic’s entertainment guide.

Fitzhugh-Craig is an Editor and the President of shades Magazine located in Arizona. The E-zine (and soon to be print version) is a monthly publication which honors and recognizes Women of Color. Although it offers something for all women, the focus is African American, Hispanic, Asian American and Native American women, with a goal of promoting the general awareness of these women through intellectual challenge, spiritual enlightenment, and cultural enrichment.

Fitzhugh-Craig is a longtime supporter of community organizations. She is secretary for the Arizona Association of Black Journalists and vice-president of Juneteenth Tradition, Inc.

Fitzhugh-Craig is a wife and mother of four children and resides in Arizona.