The Boys of Winter 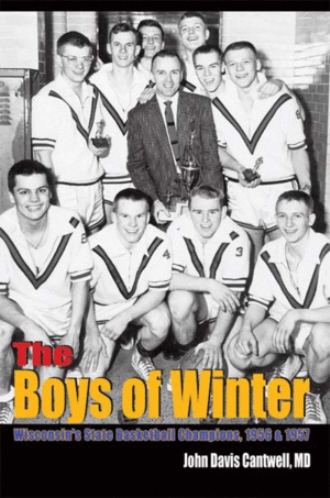 We were just boys then, in the mid to late 1950s, drawn together from diverse backgrounds by a love of basketball and an appreciation of each other’s talents.

We shared a common goal, to win the state basketball championship, to be the very best team out of 750 or so in the entire state of Wisconsin. We accomplished that twice, and nearly a third time.

This is the story of those teams, of what became of each member, and of their reflections upon the unique experience.

A Hoosiers – type scenario: A group of boys from a small Wisconsin town learn the game of basketball at a young age, culminating in consecutive state basketball championships.

The players reflect upon the era, their coach, and the ingredients of a championship effort.

Dr. John Cantwell is a third generation physician from Wisconsin. He is a cardiologist with Cardiology of Georgia P.C., medical director of the Homer Rice Center at Georgia Tech, and Director of Preventive Cardiology and Cardiac Rehabilitation at Piedmont Hospital. He is editor of the Journal of the Medical Association of Georgia.

He attended Duke University where he majored in English, participated in varsity basketball, and was a member of Duke's first ACC championship team. After graduating from Northwestern Medical School, he interned at the University of Florida and obtained a medicine residency at the Mayo Clinic. Post-doctoral fellowships in cardiology were served at the University of California, San Diego, and Emory University.

He served as Chief Medical Officer for the 1996 Olympic Games, ultimately responsible for the care of over ten thousand athletes and 1.5 million spectators.

The author and co-author of seven books, (including Stay Young/ at Heart, Modern Cardiology, Medicine for Sport, and From the Heart to the Himalayas), Dr. Cantwell enjoys creative writing, reading, distance running, and participation sports with his wife and two children, one a physician and the other a nurse. He is an active member of the Explorers Club and has enjoyed adventure travels to all seven continents. He is a charter member of his high school's Sports Hall of Fame for his football, basketball, and baseball exploits, and still holds the school's career basketball scoring record.

Awards and honors include the Atlantic Coast Conference Honor Roll for Scholarship and Athletics, the Aven Cup (highest award of the Medical Association of Atlanta), and the Morehouse Medical School Award of Excellence (other recipients include Archbishop Tutu, Jane Fonda, Lennie Wilkens, and Edwin Moses).