Chariots of Gods or Demons?

The Incredible Truth About UFOs and Extraterrestrials 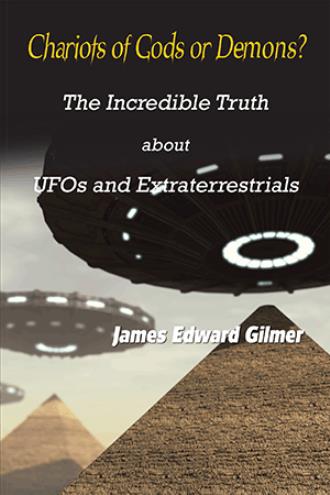 Perhaps the most astounding of all myths proven to have a core of reality involves a key part of the cosmology of a small African tribe called the Dogon, who now live in Mali. This millennia-old myth begins with the Dogon belief that their people originated in a double star system. One that includes two stars--Sirius, aka Alpha Canis Majoris or the Dog Star, and a smaller companion star known as the Digitaria star. The first astonishing fact that immediately becomes clear is that a simple tribe of people, with no astronomical instruments or calculation systems could know that Sirius was part of a double star system. After all, although Sirius (Sirius A) (See brightest object in figure 58) is the brightest star in our night skies, the smaller star, Sirius B is not visible to the naked eye. As a matter of fact, it wasn’t even visible to telescopes until the late 19th century, and not officially verified until 1970! It had been simply too small and undetectable in the glare of the much brighter Sirius A. Thus the Dogon possess ancient astronomical knowledge that was just recently discovered by modern scientists. But how?

And that’s not all. According to some very interesting research done by Robert Temple, other even more amazing parts of this Dogon myth presuppose a knowledge of astrophysics and even nuclear physics that rivals our highest current scientific knowledge in these areas. Consider the following partial list:

The Dogon myth teaches that Sirius B is smaller but heavier than Sirius A. This is absolutely right. One would naturally assume that the larger star would be the heavier, which normally occurs with main sequence stars. But what makes this Dogon myth so shocking in its correctness, is that we now know that Sirius B is not a main sequence star, but rather a white dwarf. This is the hot core that remains of a low-mass star, which, in its death throes has swollen to a red giant and then blown off its outer layers as planetary nebula. This core is now no more than 50% larger than the Earth in diameter, but is so dense that it contains nearly as much mass as our sun. Thus, only someone with a background in nuclear physics could have known that Sirius B is heavier than Sirius A. So how could the ancient Dogon have known?

- The Dogon myth states that Sirius B orbits Sirius A every 50 years. Exactly right. We’ve only very recently verified this.

- The Dogon myth indicates that Sirius B orbits Sirius A in an elliptical fashion. Verified. As a matter of fact, most orbits are elliptical to some extent, but again, astronomical instruments and calculations are needed to determine this.

- The Dogon myth notes that Sirius B rotates on its own axis. Correct. Most celestial bodies do the same thing, but this fact presupposes a modern knowledge of astronomy.

The most obvious question is how the Dogon came upon knowledge of the Sirius star system that we didn’t even know until recently. They didn’t have the scientific know-how to collect this information, so only two other logical possibilities come to mind. One, they were given this information by someone. But since no one on this Earth had such knowledge to give, it would have had to come from someone not of this Earth, right? Two, their ancestors really did originate from the Sirius system. Actually, there is truth in both of these suggestions, which we’ll examine again a little later.

flies galaxies beyond traditional books on UFO’s and extraterrestrials. It addresses the many puzzling issues relating to extraterrestrial visitors in a clear, enlightening and even inspiring manner. Instead of simply listing UFO sightings, posing the usual questions and suggesting unsupported answers it poses the tough questions, delivers the answers and back them up with solid evidence - Where do UFO’s come from? Why are they here? Where are their bases? These are just a few of the questions answered by this book.

reveals little-known facts about extraterrestrials, the universe around us and mankind itself. Our origin and development as a species, our relationship with extraterrestrials and attitudes that limit our growth are among the topics discussed.

is must reading for beginners or experts the curious or die-hard enthusiasts. No other book offers such a fountain of facts and revelations on this topic. And finally, no other such book can change your attitudes about life the way this one can.

James Edward Gilmer is a certified hypnotherapist who holds A. A., B. S., M. A., M. Ed., and Ph.D. degrees from several colleges and universities. A polyglot who has studied in various countries around the world, Dr. Gilmer has taught foreign languages and served as a translator-interpreter for the federal government. He has done extensive research on paranormal phenomena, which has formed the basis of earlier books of his including Brothers in the Light, A book on near-death experiences, and For a Hundred Lifetimes, a reincarnation romance novel - both books were published by 1stBooks Library.