Othello's Children in the "New World"

Moorish History and Identity In The African American Experience 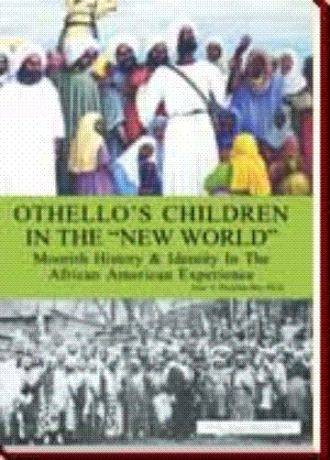 Very few organizations in the history of the U.S. have sought to give African peoples in the Americas, a historical reason to love and embrace their Africanity. This would be especially true if one were referring to popular "grass-roots" organizations. Few groups had emphasized the need for so-called "Blacks" to look back at their pre-U.S. origins in order to better understand their "true" selves and to ameliorate their oppressed condition. Historically, the tendency among U.S. "Blacks" has been to retreat into Christianity and theologically-Eurocentric Christian churches. This is most ironic, given the fact that for centuries American churches more often than not, validated the oppressive (and even bestial) conditions from which "Blacks" sought refuge.

One would think that Africans in the Americas would have rejected the religious tradition of their European subjugators, for older & more Africa-centered sources of knowledge & spiritual relief. Yet historically speaking, relatively few African Americans have turned away from traditional Christian circles in order to find a greater understanding of themselves and the world(s) in which they live. But one alternative has been the "Moorish Science Temple" which emerged in the early 1900's.

Today, many students of Nile Valley civilization know that the ancient Kemites wisely contended: "Know Thyself". Yet this saying also appeared in the official sacred text ("Moorish Koran") of the Moorish Science Temple of America back in the late 1920's. In fact, this little known organization presented official literature and teachings which were ahead of their time in revealing much about the so-called "Negro"/"Black" identity. But unfortunately, the historical and cultural ignorance most often found within the "Black" community, prevented most people from taking an interest in what the organization had to offer.

In the early 1910's & 20's, the wearing of "strange" head-coverings known as "fezes" and the member's references to "Moorish Science", would certainly have appeared quite alien to a populace weaned on American Christianity. But through the efforts of leaders such as Marcus Garvey & the men and women of the Universal Negro Improvement Association, the level of historical awareness and cultural consciousness among the "Black" masses was raised. Consequently, many newly enlightened "Negroes" were able to give greater consideration to the teachings of founder Drew Ali, and thereby came into Moorish Science Temples. However, the relatively recent work of the late Hugo Prosper Leaming-Bey on the "Ben Ishmael" tribe, also suggests that early support for Ali's movement came from a "midwestern" Indian community known as the "Ishmaelites."2

In time, several factors reduced the presence and appeal of the Moorish Science Temple movement. This included: the personal weaknesses of some Moorish Science members, externally imposed political intrigues, and the usual materialistic seductions of our society. All such factors would take their toll in stifling the success of the Temple organization and its message. Sadly, almost immediately after Drew Ali's passing, there was a fragmentation of the initial Moorish movement into several different factions. Each faction would present varying interpretations regarding where priorities should be placed. Unfortunately, this factionalization would ultimately add to the confusion concerning the purpose of "the movement," and this would further diminish its popularity & strength. Never-the-less, the message regarding the "Moorish" identity of African-Americans, has reached pockets of the rank & file over the past 88 years. But greater clarity regarding the significance of the "the movement" is direly needed, and that is the primary concern of this work.

1The Moorish Science Temple Divine Movement of North America is one such "splinter" group.

In the early decades of the 20th century, a North Carolinian named Timothy Drew, established a political and religious organization known today as the Moorish Science Temple of America Inc (M.S.T.A.). Later referred to as "Prophet" Noble Drew Ali, he would teach the so-called "Negro" ("Black") public of the 1910's and 20's, that they were specifically "Moors," and that they needed to publicly declare their Moorish nationality and Islamic faith. Drew Ali insisted upon the designation of "Moor," while relatively few of his contemporaries understood or appreciated the logic of placing such emphasis upon a "Moorish" nationality. With the exception of Shakespeare’s fictional "Othello," few "mainstream" Americans knew anything of consequence concerning "Moors" in any Western society. But before his passing in 1929, Ali’s Moorish Science Temples would expose "Negro"Americans to historical information connecting them to a "Moorish" identity.

Using primarily a historical methodology and drawing directly from M.S.T.A. literature, this work explores the key postulates of the Moorish Science Temple movement. The study utilizes the pre-1929 official literature of the Moorish Science Temple: "The Moorish Koran," "The Koran Questions," and "The Moorish Literature." This study shows that the Moorish Science Temple provided valuable historical leads in understanding some of the more enigmatic and little known facts of American and World history, as they pertain to the Moors. Through the organizational texts one was told of the ancient African connections with the American continent, as well as the Moorish "Moslem" (Muslim) presence in the pre-Columbian Americas. Such Moorish Science postulates regarding pre-Columbian contacts between Africa and America, proves intriguingly accurate when we take a fresh look at the "racial" ambiguity of the term "Indian" in American history.

This work also discusses why Ali’s interpretation of the Islamic religion differed from that of "orthodox" (Sunni) Islam. Furthermore, it discusses U.S. diplomatic history and how Imperial Morocco, an African Islamic country, was evidently the first government to recognize an independent United States. This study also explores U.S. legal history and reveals how free "Moorish" nationals were legally classed (caste) as "Whites," although they were clearly African in origin and appearance. Yet these facts, and many others regarding the M.S.T.A. and the Moorish-American legacy, have largely remained mired in obscurity. It is the purpose of this work to help release such facts, in order to allow for a broader view and discourse concerning the African’s American Experience.

José Vittorio Pimienta-Bey was born in New York to parents of Bermudian, Cuban, Barbadian and Moroccan ancestry. He received his B.A. in History from Gettysburg College (Pa.) in 1984 and his M.A. in History from Shippensburg University (Pa.) in 1987. He later earned his Ph.D. in African American Studies from Temple University (Pa.) in 1995. Since 1985, Pimienta-Bey’s primary research interest has been the study of African ("Moorish") influences upon the development of "Western" academic and social institutions. From 1991-2001 he served as an Assistant Professor of History at West Virginia University (WVU), where he taught courses within the History department as well as in the Africana Studies Program. At WVU he also participated and served as a consultant to the Center For Black Culture & Research’s Saturday School Academy, which mentored secondary school students and talk them about the historical significance of African peoples.

Dr. Pimienta-Bey’s historical essays have appeared in Message Magazine, The Louisiana Weekly and in Dr. Ivan Van Sertima’s anthology The Golden Age of The Moor (1992). Dr. Pimienta-Bey has traveled extensively during the course of his research, having visited such countries as Morocco, Cuba, Brazil, Spain, Italy, France, and Great Britain. In his spare time he enjoys practicing Wing Chun Gung Fu, writing music and playing guitar in a local Celtic band called "Sang Run." He is single, and presently resides in Morgantown West Virginia.