The Story of an Arizona Pioneer

by Charles B. Wolf 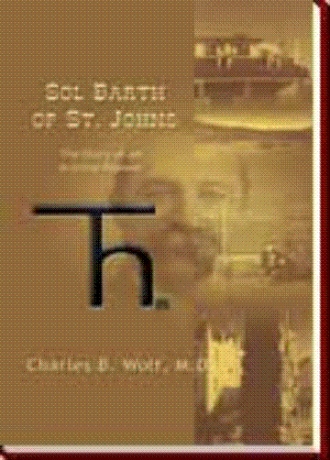 Solomon’s death was a notable event in the history of the young state of Arizona (which became the forty-eighth member of the Union in 1912). The following is from the Arizona Republic, published in Phoenix on December 12, 1928.

Phantoms of Arizona’s Glorious Past arose in solemn array Tuesday afternoon as the Senate paid tribute to one of the state’s pioneers, Solomon Barth, founder of St. Johns, which is now the county seat of Apache County. There will be a permanent record of his 67 years of residence in Arizona, spread upon the journal of the legislature, according to a resolution adopted by the senators. Barth resided in Arizona longer than any white man living.

As if the elements had prepared for the occasion, the dark clouds which preceded yesterday’s heavy rain cast a deep shadow over the senate chamber. The light was dim. For fifteen minutes not a sound was heard in the gloomy chamber except the voice of the clerk who read the outstanding incidents of the man who once battled the great Indian chief, Cochise, and who was a personal friend of Kit Carson. The page from Arizona’s history stood out in bold relief from the routine proceedings of code adoptions.

Whereas the omnipotent has called to his fathers the soul of the Honorable Solomon Barth of St. Johns, Apache County, Arizona, ripe in years and honored of men, a devoted husband and loving father, it is for posterity that the Senate assembled sets forth the few following facts connected with the life and history of said beloved citizen of the State of Arizona: Solomon Barth was born in Prussia in 1842, and at the age of 13 years came to America. Before he was 16, he had crossed the plains afoot to California and within a year or two had worked his way to the town of La Paz, the rich gold diggings on the Colorado River. From La Paz he followed rich gold excitements, including those of Weaverville and Granite City. Of an intrepid nature the vocation of pony express rider appealed to him and for some time he carried the mail from Fort Whipple to Santa Fe, New Mexico, dodging the Indians when possible, fighting them when necessary. He next became an Indian trader and was so loved and respected by the Indians of Northern Arizona that through tribal rights and treaties he was granted a portion of Northern Arizona equal in size to any one of many eastern states and including a portion of what is now Apache County, and the Grand Canyon of the Colorado. He established the settlement of St. Johns, now the county seat of Apache County, and deeded much of his land holdings to the Mormon settlers, then coming to the territory in numbers. He prospered in business and was many times honored by his neighbors and fellow citizens by public office. He was a member of the 11th and 19th Territorial Legislatures where he served with honor and distinction. At the time of his death, Nov. 30, 1928, Solomon Barth was the oldest white man, in point of years of residence within the State, and at the age of 86 years passed peacefully from the land he loved, surrounded by the loving members of his family.

tells the story of one of the most colorful of the Arizona pioneers. Sol Barth began his career in the 1860s as a pony express rider and trader...dangerous occupations at the time...then became a storekeeper and eventually established a large mercantile company. He was also a cattle and sheep rancher with rights to land extending from the Grand Canyon into New Mexico. He deeded a portion of his holdings to Mormon settlers and established the town of St. Johns.

Sol Barth was born a Prussian Jew and married into an aristocratic Spanish family. He was respected by the existing Mexican population and by incoming Mormons and other settlers. He was also on good terms with most Indians, including the chief who saved his life when he was captured by the legendary Cochise. He served twice in the Arizona Territorial Legislature, voting in favor of statehood.

Like many of his contemporaries, Sol was no stranger to gambling and gunplay. He was also briefly (and probably wrongfully) imprisoned, but...a testament to his popularity and good character...was subsequently pardoned by the governor, who was moved by numerous petitions, including one submitted by the same jurors who convicted Sol. At his death in 1928, Sol Barth had spent more time as an Arizonan than any other white man.

The story of Sol Barth continues with accounts of his descendants, who variously served in the government, ran the Barth store, managed the ranches, and collected Indian and pioneer artifacts (which have since been donated to the state). Sol Barth of St. Johns augments the historical record with hitherto unpublished facts and personal recollections, illustrated with photos from the author’s collection.

Charles Wolf, M.D. is the great-grandson of Sol Barth. He grew up in Arizona and spent his boyhood summers at the home Sol built in the town of St. Johns. Five of Sol’s children lived there and frequently entertained Charles with stories of Sol’s escapades and adventures.

Scholars familiar with the history of Arizona, Mormon settlement, and Indian affairs may already know bits and pieces about Sol Barth. Over the years, newspaper stories and magazine articles have attempted to describe his fame as a scout, landowner, mercantile baron, and territorial legislator. But there is no organized source that tells the complete story of Sol’s life and his legacy.

The author felt compelled to collect all the available facts, supplemented by personal recollections from people who knew Sol personally, to tell a coherent story. In doing so, the author discovered that many of Sol’s most colorful adventures – particularly his escape from the ruthless Indian chief Cochise – had never been formally recorded. This book is intended to make those stories known. It ahs been said that after 1861 Cochise executed all his male captives. The capture of Sol Barth and his party has been recorded, but no that Sol's group was the only to escape. That singular, unique escape is a footnote to history.

The author hopes that his work will appeal to students of Arizona history and the history of Mormon settlement of the southwest, and anyone else seeking inspiration from the story of an American original – Sol Barth of St. Johns.