JACKBOOTS in the HEARTLAND 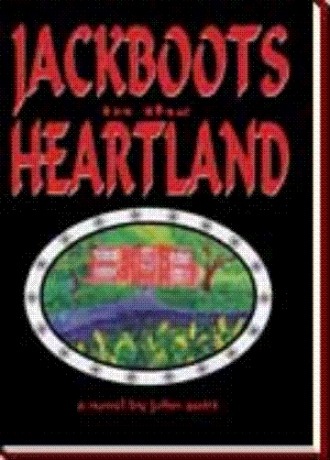 Afterwards, there was endless argument over how such a thing could have happened. How could North America have awakened one morning to a full-scale invasion? Shouldn’t espionage agents in Europe or someone have been able to learn that an attack was coming? Why wasn’t it stopped promptly, before it could sweep through the East? And was it useless to continue resisting and sensible to have entered into a cease-fire, bringing eleven weeks of fighting and killing to a halt? Or was it cowardly? These and myriad other questions were debated, again and again, wherever people gathered in the summer of ‘41.

Not long after the cease-fire took effect, in a dusty little tavern on the Iowa side of the Mississippi, about a mile from the river’s edge, the debate got underway around sundown. Outside, the corn was knee-high, as it usually is by early July, and the mosquitoes buzzed through the air like miniature Stukas. The temperature that afternoon had been in the 80s and a darkening sky carried the hint of a thunderstorm. From time to time flashes of light brightened the horizon in the east. Watching them through the front window, some of the regulars claimed the flashes were heat lightning. Others said no, they were coming from artillery across the river. The Germans, they said, were taking their evening target practice, lobbing shells from a base camp on the Wisconsin side into Hog Slough and White Rat Island in the Mississippi backwaters. The tavern, Ruthie’s Rattle Inn, sat on a hill behind the western bluffs, alongside a dirt road that curved away from the bluffs and crossed into farmland.

Around the bar there was disagreement of a more serious nature about what had gone wrong. One group, made up of Doughboys who had fought in the Great War and felt they knew a thing or two about battling the Germans, argued that the politicians were to blame. By failing to spend enough money for defense, they said, the governments of the United States and Canada had left both countries vulnerable to attack. Elected officials of every political persuasion were held to be at fault; none seemed to share the Doughboys’ conviction that you had better keep your guard up if you’re going to live on the same planet with Germany. The principal spokesman for this point of view was a farmer named Emil Gunderson who kept reminding everyone he had "traded bullets with Jerry" in the trenches of Flanders in 1918.

In support of the argument that skimpy military budgets were to blame, Gunderson cited published studies, prepared between 1938 and 1940, documenting shortages of armored vehicles, artillery, antiaircraft guns, modern fighter planes, bombers and trained pilots. Not content to let the matter rest there, he also pointed to the experience of his nephew, called up with the National Guard and sent to camp in the South, where the young man found himself training with cardboard boxes and wooden poles because tanks and antitank guns were unavailable. "A cryin’ shame," said Gunderson. "None of this ever would have happened if the nutheads in Washington hadn’t let the army get whittled down to nothin’."

"And the navy, too," said Lyle Quam, another of the Great War veterans, noting that he had served on a battleship in the Atlantic and knew something about naval defense. "Can you believe signing a damn treaty agreeing to stop building battle wagons? That’s what we did, in ’22," Quam complained through a mouthful of chewing tobacco. "And we agreed to cut back on warships some more in 1930. Once Hitler got his hands on the fleets of them European countries, there was no stoppin’ him. What navy we had was spread thin over two oceans, with a lot of it out in the Pacific, keeping an eye on the Nips."

Others around the bar, too young to have fought in the Great War, claimed they nonetheless understood the situation well enough to feel sure the veterans were missing a key point. It was unrealistic, they said, to expect the United States to stay armed to the teeth during peacetime. Not after winning the war to end all wars, and certainly not in the middle of a depression.

The novel begins on a foggy morning in Lower Manhattan in the spring of 1941. The dark shadow of Nazism had spread across Europe and Adolph Hitler was looking to expand the boundaries of the Third Reich. In Japan, militarists were plotting fresh conquests. Along both the Atlantic and Pacific coastlines, old forts and cannons stood guard against potential enemies that seemed far away. America in those days thought of itself as inviolable, isolated from the troubles of the world by two large oceans. Its focus was inward. A decade earlier, the Roaring Twenties had ended with a crash on Wall Street. The pain of the Great Depression lingered on, but the prospects were for a gradual return to prosperity. It was a time when Americans might have said to themselves, "Things aren't great but they could be worse."

Indeed they could. As the morning fog lifts on April Fool's Day, the joke of the hour turns out to be no laughing matter. A national tragedy is unfolding and illusions of invincibility are shattered. The setting soon shifts from New York and the East Coast to America's Heartland. In a small town on the banks of the Mississippi, residents find their lives turned upside down by unwanted visitors wearing black uniforms who parade through the corridors of the local hospital with their jackboots clicking. They have come to commit acts of terror and mass murder.

This is an "event" story with unforgettable characters: Ma Popcorn, Buddy the Bricklayer, Polar Bear, Clyde the Shoemaker and the mysterious Mr. Mud. You'll meet Edith, a tenacious teenager and her high-strung mother, along with Senator Phil LaGassly and Andy Mattson, a bilingual country newspaper editor approaching middle age who lives for the day when he can find a little peace in this life. Circumstances force him to become an adventurer. Together with his ex-finance – the proprietress of Ruthie's Rattle Inn--Andy is drawn into a clandestine scheme aimed at turning back the clock and making things the way they were before April Fool's Day.

John Quirt was born in Southern Wisconsin, near the area that serves as the main setting for JACKBOOTS in the HEARTLAND. As a correspondent working in Europe some years ago, he began looking into the circumstances under which the Nazis might have been tempted to try to invade North America. Declassified documents and interviews with military strategists and intelligence officers enabled him to piece together the credible scenario that serves as the backdrop for this, his first novel. During his long career as a journalist and writer, Mr. Quirt has been a correspondent for Time and CNN. He has contributed to CBS News and NBC News and written for Fortune, The New York Times and other publications. He lives in Northern California.