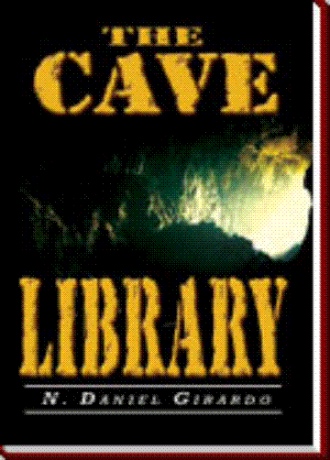 A low snarl emerged from deep in the throat of Sigre, the huge saber toothed tiger, as it padded slowly and silently into the cave. All it smelled was fear. That fear eminated from the paltry band of humans, old men, old women, crippled, pregnant women and young children, who were in the cave. The hunters and helping women were away searching for food and would not return for several days.

Of course the gigantic cat did not know this. All it was aware of was a relatively easy source of food. Its eyes rapidly adjusted to the dimly lit cave because even the sacred fire had been allowed to die low.

Somehow discipline had grown lax. Ghia, the matriarch, was very busy caring for a very sick woman. She left her daughter, Shala, in charge of the evening ritual, which consisted of rolling the stone across the opening of the cave and assigning fire guards to put plenty of wood on and near the sacred fire. Shala forgot to do any of her duties, tiring early having spent the morning and afternoon in the meadows with her two young twin sons. They fell asleep right after the evening meal.

Ghia did not check to make sure the cavern was secure, thinking Shala had done so. So did all the other people in the cave. They all went to sleep peacefully unaware of the looming danger.

Now everyone cringed in fear. All each small group could do was hope the saber toothed tiger would attack someone else, gorge and forget them.

Sigre advanced boldly, looking from side to side, a little puzzled at the prey before him. There was no effort to escape or fight being made by these people.

From the rear of the cave came the whelping of two wolf pups. They scampered forward, heading for the light at the cave’s entrance. They had no fear of the tiger or humans, never having seen either species. No, they were not intimidated until the tiger emitted a louder snarl. That caused them to stop and pause.

Here was game Sigre understood and he moved forward towards the cubs, ignoring the people for a moment.

From the deep depths came another fierce, wolfish growl as a huge she-wolf leaped forward in front of her cubs. With one swat she sent both of them yelping into the cave amongst the astonished cave dwellers.

Sigre backed up a pace. Not that the wolf was a problem, but the probability of obtaining an easy meal was over. However, the big cat would soon take care of this obstacle. After all he outweighed the wolf by more than two hundred pounds.

Now Lupa directly faced Sigre. She knew no fear either, even against a cat this size. She was defending her cubs. Her fangs flashed and saliva ran out of her mouth.

Sigre haunched on his rear legs and sprang at Lupa, teeth trying to get the killer hold on the wolf’s matted and tangled hair. He launched his attack with claws slashing, raking Lupa’s exposed flanks. At the last moment Lupa veered slightly to one side causing the tiger to glide by. Lupa then pounced on the tiger’s back and bit deeply into the stripes, paws and claws gripping the back. Sigre rolled over to get rid of the wolf. Only then did Lupa loosen her grip but she also raked the tiger’s side with her sharp claws. Then she stood up feebly, ready for another tiger charge.

She told him a very strange story. High in the mountains above the village, a shepherd boy discovered a cave while he was searching for one of his sheep. He noticed that water was seeping from the ground. He found the opening when he traced the stream to the source.

Inside the cave, which was lighted, he saw row upon row of books, manuscripts, scrolls, papyruses, clay tablets and other forms of material to hold writings.

The Italian government quickly kept the knowledge of the cave quiet until it could send scholars to study the contents. It seems librarians from different eras had kept the library in great condition.

One of those authorized to study the contents of the Library was another cousin of the author's. He gave several of the stories to Theresa. She secretly brought them to the United States and gave them to the author.

He had them translated, added a few stories of his own and wrote this book.

Retirement just means the beginnings of new occupations and new activities.  The author and his wife, Connie, are members of a gardening group and a reader’s discussion group.

The author writes newsletters and news articles, sings in the church choir and at the local Jewish Nursing Home and is a member of two veteran's organizations.

For 35 years or more he held various educational positions.  He taught all grades from 4th through 12th, all levels of students, from rural to inner city to suburbia.

Since education offered a meager salary while he was involved, my secondary careers included Army Reserve and movie projectionist.

He and Connie have one married daughter and a grandson, Bryan.  Their activities include reading, gardening, watching TV and shopping.