A Wind Across the Century 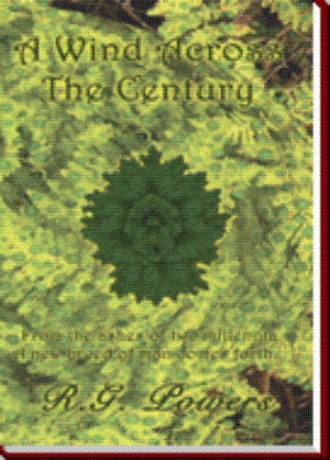 Edward was not pleased, to say the least, that every evening since their arrival Margaret had gradually become more intemperate. Between her and Radclyffe he felt like he was going mad. He was beginning to split, between the life he was living and the life that was destined to be, the life he wanted more than this convenient life. He felt as if he might give his very life just to have a moment of the taboo one, the bohemian one, the real one. If he did not one day choose his fate, fate would choose for him, and he might be torn apart. The idleness, the vacant egotistical chatter he had partaken of in the last several days was beginning to take a toll. He was, by nature, a solitary person. Despite his displeasure with his wit, his cleverness, he assured himself the position that rigid self-discipline would blow this muddle from his head. Still, it would not do. And, as punishment for remaining inconclusive about this muddle, he sent himself down to the sitting room for a drink.

He moved quietly through the house, afraid the servants might wake and annoy him with inquiries about their utility. Tree-shadows played across the walls through the windows as he crept toward the sitting room and an excuse to get as drunk as he might, to avoid the obvious trepidation he had been feeling.

He lit a lamp, skulked over to the liquor cabinet which remained unlocked, for the Glastons trusted their servants, and poured himself a drink. Embers glowed dimly in the fireplace, and there was a heady scent of cigarette smoke and Herbert’s bourbon lingering in the air. The room was peacefully still, but for the few half-melted ice chunks he scrounged that rattled about in his emptied glass. He poured another, swiftly tilting the contents of the evening away. Finally, in a state of inebriation mind you, he discovered the truth that Radclyffe, Heath, was of his own; that they, secretly born into nations which turned slowly through the centuries were indeed Olympians that met in this turbid coil, and came together for secret purposes, to whisper a secret insight through this earthy plane the unmitigated mysteries of nature to everyone who passed.

He also began to understand why he was being pushed into this writing business; one day he would become a prophet of the new world, as scientific as it had become, and must be able to transmit his ideas in a new way. After all, his career seemed by nature a process of limiting thought, of reciting the rote so that others one day would do the same. No, he was becoming wise, and so could no longer tolerate his position of artifice at Cambridge that showed even more inappropriate than that of love-interest to Radclyffe. He was changing, and felt it, and became aware that his life was a lie, and the only way to rectify it was to give up the profession of lies he had been previously partisan to. But how would he make a living, to support Margaret and himself? And how would he give up his absurd post, without some form of scandal at the university? It teased his brain that he did not know why, and excited his senses that he did.

With the faith of a saint he tipped back another drink, warm in his resolve that nature itself was liberating him from his obligation to be who he was, or, for that matter, what he thought he might become. The perceptive rain sent messages to him as it channeled down the windowpanes. Flooding streams echoed Scylla in his heart, the pools in Heath’s eyes echoed the deep Charybdic whirls of his very destiny.

He thought now about his love, the warm midnight inside this room, the rain, the coals, the drunken beat of his filling heart. He had hours before the sun, hours of silence, hours of reverie to dance inside his head.

He began to feel his body now, moving his hands slowly down the seasoned flesh; the meaty pectorals, the rotund belly, the tightened buttocks, thick shoulders and arms, sausage-like fingers on meat-cutters hands. He leaned against the wall by the window and took himself in his arms, ran his hands across himself, moving one inside his trousers, and then the other there soon after. He squinted at the embers, feeling his inebriated flesh pulse with their gloaming heat. He was the piano to the ember’s metronome. His body moved slowly with the remnant flickers of life dancing dimly on the walls from Vesta’s consuming hearth. They danced regardless, as long as the fire was lit, and so must he.

Just then a shadow lifted on the wall, a great preternatural specter, originating from the seat he sat in by the fire when he tried to avoid Heath. The Olympian turned, glass in hand, took a drink, and the eyes that flashed in the firelight and the face that eclipsed deep orange was Heath’s. Edward was prepared for this, and without characteristic guilt removed his hands from his trousers.

He laughed sarcastically and put his hand on his hip, standing counterpoised. "I cannot seem to evade even your ghost."

"This is hard, for I am not quite sober--" He shifted to another foot, still standing contrapossto, as if inviting the tryst, and slid his hands coolly into his pockets.

"--Yer quite drunk." His eyes pulsed with passion.

Edward Willoughby, trapped by his position in Edwardian English society, is confronted by a desire that he had never imagined would become part of his life. When he and his wife are invited to the affluent Glaston Estate, he is forced to come to terms with his innermost longings that do not include his wife Margaret. Heath Radclyffe, a groundskeeper to the estate, makes this longing far more difficult than Edward is willing to admit or pursue. Finally, a path has been laid, but will Edward go with his instincts that defy every law he has been taught about this unspeakable form of love, or follow the true nature of his heart? A novel in the style of Radclyffe Hall or E. M. Foster, A Wind Across the Century is a modern adaptation of an ancient principle that rings true throughout history. All love is divine, and reflects man’s greatest challenge . . . to love freely.

R. G. Powers spent most of his life pursuing literature and art, finally obtaining a degree in Philosophy and settling on writing novels. He has since published a short essay in The Bear Book by Les K. Wright. He currently resides in Long Beach, CA.