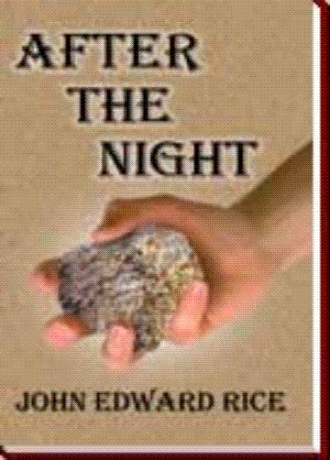 As for Ludim’s other friend Rehar, he resumed the business of being a family man, plying his trade as a metal worker, proud of his wife Rachel and their two little boys.

Still very much alive was his tendency to search and question, question and search. He remained unaware, however, that his inquiring mind was gradually becoming the subject of concern among a few acquaintances--concern about his safety.

As that night was near its end, and the Sabbath day was about to begin, Rehar wandered outside the compound of the Israelites in the Wilderness of Moab. Morning light would be breaking very soon.

He looked around furtively and apprehensively in the ghostly quiet of the pre-dawn.

Despite his thoughts about problems in his nation’s laws, it was not a rebellious Rehar that was in a secret struggle on this certain Sabbath morning. Rather, it was a devout and soul-searching Rehar that was looking for a way out of an honest dilemma.

He was facing the possibility of trouble with uncertain consequences; but he did not realize how great was the danger that he was facing--a danger greater than he was ever to imagine.

"I have to decide quickly," he said to himself, "Daylight will come any moment, and someone might see me if I delay too long." The Sabbath had begun the night before at sundown and would continue until the following sundown. He was about to do something out of the ordinary because of a quandary in which he had found himself. He was, in fact, about to do something that might turn out to be illegal with consequences, the severity of which had not as yet been determined in the law.

He paused in a near motionless search of the horizons surrounding him. Standing in solitude he wrestled with his thoughts for a moment. There was not much time left in which to make his decision--a yea or nay decision. Should he proceed with his plan of action, or should he not? Daylight was coming fast, and the chances of his being seen by others would increase rapidly.

The strange fact about the tragic peril that he faced was its relation to the Sabbath day. It was the very presence of the Sabbath day that was going to imperil him.

But how could a Sabbath day be perilous? A Sabbath day is supposed to be restful, worshipful, filled with reminders that one’s God is in control, a break from the toil and cares of everyday.

But the Hebrews lived under law--law only-- and their laws, all of them, were transmitted directly to the people by their leader Moses.

The Sabbath law in its beginning stages had simply forbidden any work on the Sabbath.

As the tribe increased, however, it became prudent for the people to be engaged in some kind of non-work activity rather than to merely watch the drab and lifeless hours go by.

Very few people can abide simply doing nothing during the long hours when they are not in a worship service. Stark inactivity of that kind is depressing rather than inspiring.

As for their worship service, it became unmanageable for all of the tribes to attend the priests’ worship service at the tabernacle tent. The tribes had increased rapidly through the span of a full generation.

A custom had therefore developed whereby Sabbath observances were largely a home activity observed by putting on one’s best clothes, the mother in the family lighting the candles and serving the heartiest meal of the week.

A typical Sabbath for the wandering tribal Hebrews of the thirteenth century B.C. was the one opportunity for warm pleasure and delightful socializing.

These matters had a great deal to do with why Rehar was out on a search early on a Sabbath morning.

As Rehar stood in the pre-dawn, he did not know that he had been followed. Someone was hiding in the unevenness of the rocky terrain and was already watching him.

What is it like for common people to throw stones at a condemned person until he is battered into bloody agony and final painful death? Can ordinary people really engage in such brutality? If they can, are they therefore nothing more than a vile lynch mob? In today’s world, we would call such an action cruel and unusual punishment, and quite illegal.

The reading and re-reading of a certain gruesome incident recorded in the Bible is enough to fill one’s mind with questions. What would it be like for us to step back in time and see the brutality of a Biblical stoning actually occurring? Could we stand the sight of it?

This book is a fictional story based on certain Bible passages, which in the author’s mind lend plausibility to his story.

The author was born in his grandparents' home in 1918 in St. Augustine, Florida while his father was in World War I. While he was still an infant, the war ended, and the family began an itinerary of living in small country towns of south Florida. He then saw some boyhood ranch life in Florida's backwoods in the days of open-range cattle herding. He continued with schooling and became a minister in the Methodist Church.

The author's service in two wars was as chaplain plus various occasions of troop entertainer and hospital entertainer.

Most of his years have seen him variously as minister, science teacher and storyteller, holding the degrees of Bachelor of Science, Bachelor of Divinity and Master of Arts.

He values highly the twenty-six years of active ministry that he had before they were suddenly interrupted by heart problems. He took early retirement into inactive status, retaining his full ordination. For a few years, on a part-time basis, he taught general science in adult education.

Through it all, he has maintained a great interest in the religious calling that was his from boyhood, managing to engage in frequent sessions of religious teaching.

His interest in storytelling has been a natural for him all his life. It comes easy for him in his retirement years.

The Southern Order of Storytellers awarded him their Seanachie Award as storyteller of the year. In recent years his appearances as folk entertainer have been in various parts of Georgia, North Carolina and Florida with magazine, newspaper and television coverage of some of them.