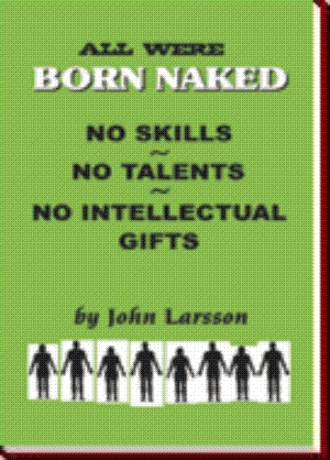 MUCH OF CONVENTIONAL WISDOM CAN SEEM TOO GOOD TO DIE

Nothing is so firmly believed as what we least know. . .

It would be helpful before you undertake the reading of this book to make a bold-spirited attempt to clear your mind of any preconceived notions or fixed beliefs about the roots of human behavior or talent. And, fret not that it may concern your personal viability, that of friends or relations, business affairs, love-making or any other aspect of life. I realize this may be easier said than done; but, if you will make this noble effort, I promise it will be well worth your while and may help you in reaching your own personal reality. And, then you might add your voice to mine and that of others who respond cynically to the many breakthrough announcements and predilections from the media or 'science' we are faced with daily.

I have always believed, as did ancient Greek philosophers, that self-control is the only means of achieving virtue. I have learned some naked truths about human nature after thirty years as an advertising executive, and in the training of university graduate candidates for corporate management positions. Consequently, upon leaving my vocation, a resolve to establish the validity or error in my personal observations led to 18 years of reading and researching the lives of the praiseworthy and the unpraiseworthy in the past and those in our present day.

I am not out to gain wholehearted support for or against anyone or anything. I accept you as you are without any qualification as a unique, one-of-a-kind human being, matchless in mind and body and spirit to any other human individual on our planet Earth. There is no male or female distinction in my investigations or philosophic position. And, the male and female pronoun or reference in every case, when used, is automatically interchangeable. (Though I do clearly acknowledge that there are marked differences between the two.)

When I suggest some ideas or techniques that some people have sworn by and may have pursued successfully, as from any well-spread smorgasbord table, select those that appear tasty or relevant to your needs and pass over any that seem they are not.

Journalists and some of the scientists who feed society's hunger for 'scientific revelations' and serve the appetites of the listening and reading public have been winning audiences of much greater magnitude than they deserve. Good news of any kind gets delivered early and often erroneously from the fields of science. Achievements or pronouncements voiced or printed, whether actually notable or not, induce wonder in us. In their desperate hope of delivering news that people desire, they keep us in awe before the many mysteries of our lives and the mysteries of the universe. But this cannot transcend the common truths that really exist in all of our lives, or provide the answers for the myriad of insolvable biological puzzles around us. In a world in which I've got my facts and you've got yours, how can anyone discern what's really plausible?

It is not the purpose of this book to air the many shortcomings of current scientific knowledge, or to point out all of the biological questions that have been left unanswered. It is simply to strip the ambiguity from the conclusions of the hope-it-to-bes and would-like-it-to-bes. It will reveal the unvarnished, true nature of the human behaviors demonstrated often in our own daily lives and in the lives of those around us.

You will recognize, of course, that it does seem to be the cyberspace society's fashion today to absolve people of any responsibility for their own behavior. They look sympathetically upon the actions of so-called drug, alcohol and smoking addicts (habitual patterns of chosen behavior) who drive themselves into disease and death. Then we pity and excuse deviates who divide themselves from normal society, gormandizers who eat themselves into bad health and deformation. And, they continue to do this despite thoughtful, caring, professional, or spiritual advice and admonition.

Then there is the skirmish between competing scientific claims. How can anyone assume that crimes, murders, and rapes are socially or biologically driven? Or, that all behavior is in some way 'caused?' And, if so, assume that individuals do not have personal responsibility for their actions? Is it to say that we may have no control over our inappropriate or bad behaviors and that something in our bodies makes us do it?

There are people who become enslaved by an 'addiction.' Now there is nothing odd or peculiar about blaming others or one's own body parts for one's own conduct. That is clearly denial and the core of personal and scientific distraction.

What of the many people who have wished an end to their behavior or habit? Did so and changed... altered their lifestyle for a better, healthier, and more socially acceptable mode of living. What of those who have set a goal for themselves, and labored away endlessly until they made it happen? There are personal choices for good behaviors as well as the bad.

Scholarly achievement, vocational or technical achievement, outstanding physical skills, and the pure acts of loving and praying and courage are the formed choices of a free-will and moral attitude. Drug addicts, alcoholics, and smokers can and often quit on their own when they learn of the consequences of their habit. The societal disgraced or criminals can, and often have, become virtuous and responsible by personal choice.

The dawning of the manner in which you, personally, are now behaving or performing can be uncovered in a search and recollection of your fading past. If its first appearance cannot be tracked to conditions and events near your birth or soon thereafter, the influence, the spur, the learning opportunity, or the source of your behavior or lot in life will certainly pop up somewhere along your own life's path.

So hold on to your seats as we shake the gates of that hallowed land we have collectively been calling 'science,' and dare to question some perceptions that have seemed to come from the mountain top. Do give heed to some observations and clear logic on the cause and effect of things socially unacceptable and those acceptable for and from a layman's point of view.

The future is an exciting and inviting universe. If this material in any way will help you and yours along the road, and paradoxically clarify some cumber- some presumptions, it will have achieved its purpose. First, you must trust that all things and all bytes of information are not unfailingly exactly as they are publicly disclosed to us; that God helps those who help themselves; that we are each undeniably accountable for our own behavior; and our only gifts in life are the opportunities bestowed upon us.

The chapters that follow will confirm this message each in its own way. Beginning when the seeds of knowledge and skills, and the rootings of behavior and character are first slowly but clearly being formed in childhood. Where the rootings lie in those singled out in the past as being very special in their fields. Then there are various techniques, courses of habit, and disciplines that have been used by many people to reach their special state in life. Also, there can be some cause when all does not go well in one's life. The following chapters will ferret out much of the reality in the world surrounding you and me

The author began his career as a medical stenographer. He also spent a short period as a liaison officer for the American Red Cross assisting first World War veterans at a Veterans Administration hospital to qualify and file claims for the medical care and disability compensation.

Later after working as a clerk in the Department of Foreign and Domestic Commerce in Washington, D.C., and attending George Washington University, he became the assistant to the Station Surgeon at the Station Hospital at Fort Snelling, Minnesota, during World War II. Following the years there in hospital administration, he launched a career in advertising.

The spur for his book and the title, "All are BORN NAKED" evolved from the author’s observations and associations over a period of 30 years within the advertising and medical communities. As a corporate management executive--director of advertising and marketing services--he excelled in writing and design. He has received many awards and some of advertising’s highest. Included were CLIO award in creative television, a national award for design of the ‘Best Package of the Year,’ as well as awards from various advertising clubs and art directors organizations.

Over the years he had an intimate, participating study of the individuality among creative people ... artists, designers, and writers. He had the responsibility for a time for the recruitment and training of university graduate candidates for corporate positions.

The inside view of personalities and skills provided a rare grasp of the behavior and characteristics that did so clearly distinguish any one individual from all the others. And, during the past 18 years since his retirement, he has devoted his time to study and research as well as exploring the lives of hundreds of the famous and infamous in history and today. All of this an insatiable quest for reasons to deny or bear out the accuracy of impressions and inferences drawn from his study of personalities during his career.

The resulting evidence questions any giftedness in skills or intelligence; any genetic or physiological causes for addiction or sexual deviation; and any possibility of curing the divisions between races, religions, or conflicts of cultures. It also provides many methods and lifestyles that have been pursued toward an inevitable success and sworn to by heralded people.