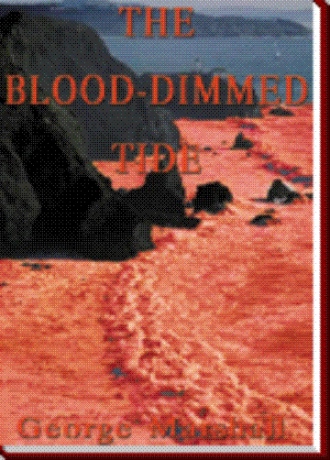 The 97-foot aluminum yacht rose and fell slowly on the lazy sea swells, her gleaming white hull in sharp contrast with the glistening, deep blue water. The powerful diesels throbbed below decks while the crew were topside cleaning their automatic weapons. A dark hulk of a man, stripped to the waist and wearing only tight cut-offs, walked around the deck passing out ammunition. With his rounds completed, he went through the spacious, air-conditioned saloon and directly to the pilothouse.

The dark man joined two crewmen who were intently watching the radarscope. Their eyes never left the blue/green disc that was constantly being swept by a bright line. The glowing disc stared back at them blankly. They were watching, and waiting, for just one dot of light to appear - any dot of light.

The radar was their eyes, stretching 48 miles in all directions to seek out some sign of activity - some sign of prey.

Sixty miles away, David Colton thought to himself, 'The Dry Tortugas are really earning their name today,' as he squinted through polarized sunglasses for some surface action. The air in the Gulf of Mexico was particularly stagnant, not even enough breeze to ruffle the Power Squadron ensign on the transom; it just hung on its pole like a limp rag. It really didn't matter much; the 40' sport fisherman made its own breeze when underway. But sitting around like this did tend to make customers uncomfortable and irritable.

On this trip, David was acting as first mate for his brother, Russ. David was the older of the two, but the family resemblance was marked. Both were tall, though David was leaner and a bit darker in coloring than his brother. They each had the distinctive Colton squared jaw, and penetrating, steel gray eyes. David was an architect, and he liked spending part of his vacation in the company of his younger brother. It gave him the chance to completely shed the demands of his job. Kingfisher enjoyed the reputation in the Florida Keys as being a 'good-luck' boat. A good deal of experience, some luck, and an array of electronic equipment were all responsible for his success. A few more well-paying fares like this one, and Russ would own Kingfisher outright. David went up to the flying bridge and said, 'Our guest is starting to melt into his chair, Russ.'

'Let him melt awhile longer. Fuel is too damned expensive to burn-up running all over the Gulf to give that fat red-neck a breeze. The cabin is air-conditioned anyway, tell him to go inside and get a beer .....nicely of course.'

As David went down the ladder to the rear deck, Russ smiled to himself and thought; 'It's a good thing I have David around from time to time, or I'd lose all my clients. He knows how to handle them.'

David was just as glad that Russ was out of earshot, otherwise, R.J. was sure to push his brother into an argument. He found R.J. Beazley lounging in a chair in the cabin with a beer in one hand, and a well-chewed cigar in the other.

'Colton,' Beazley drawled, 'where is all these big game fish we is supposed to be catch'n?'

'R.J., you've got to relax. Fishing is a relaxing sport. You have to be patient.'

Beazley got up and shoved his cigar in the corner of his mouth, and his enormous belly spread the buttons on his shirt almost to the breaking point. 'Boy, you git this straight! Ah bin more than patient with you. We bin out over four hours now without so much as a teeny nibble on mah line. Ah paid a heap of good ol' American dollars for some action, and action is what ah aim to git! Now you git your ass in high gear.'

David was ready to shove Beazley's cigar down his throat when Russ came in and said, 'Picked up some transmissions on the CB radio.... possibly some action further south.'

David turned away from Beazley to head back topside. As he passed Russ, he said, 'Perfect timing, ole buddy.'

David fired-up the powerful twin Chryslers and took his bearings. Beazley was standing on the deck below, hands on his hips, and yelled up, 'Action, Boy...that's what ah paid for...... Action!'

David pushed both control levers forward, the stern of the boat dug-in, and the sudden forward movement sat Beazley down in the fish-fighting chair very unexpectedly. Kingfisher headed south for about a half-hour, with David periodically checking sonar and the radio frequencies used by other charter fishing boats. Everything was blank. A blip finally appeared on the radarscope, and David felt that they might be coming into a fishing ground. The other boat was heading directly towards them, and the distance was closing fast. In minutes, David saw a white ship in the distance. He cut his speed to one-half power. As the two vessels came closer together, David could see it was a large motor yacht, better than 90 feet in length. 'That baby must really be juiced,' David thought to himself. It was pushing a big bow wave, but was almost on plane; a nice trick for a large displacement vessel. When the larger ship was about 100 yards away, it also slowed and settled into the water, but still maintained a collision course.

Russ came up to take over the controls of his boat, and asked David to make sure everything was secure below. He sounded four blasts on his boat's horn as a danger signal, but the big yacht didn't change its heading. Russ switched to the boat's hailer, keyed the mike, and his voice boomed across the water, 'Shear-off! You're on a collision course! Shear-off!'

'Stupid son-of-a-bitch,' He muttered to himself.

He was about to put Kingfisher hard to starboard when he was answered by the approaching vessel, 'Stop your engines and prepare to receive a boarding party.'

'What in the Hell is goin' on!' Beazley shouted up to Colton.

The large boat was now alongside; David and Russ looked up at half-a-dozen men with automatic weapons facing them. Russ turned to reach for the mike, but he didn't make it.

Two bullets ripped through Russ' body, effectively severing his spine and jugular vein. As his body fell over the console, it jammed the throttle levers forward. Kingfisher jumped out of the water, and away from its attacker. Beazley was thrown to the deck, which was the only thing that saved him from the hail of fire that riddled the boat. The lurch forward threw David over the stern rail and into the churning waters behind the boat.

Kingfisher was out of control. The throttles and the steering were being held in position by the weight of Russ' body on the fly bridge. The large motor yacht was no match for the speed of Kingfisher, but the sport fisherman was locked in a wide circle; so the big yacht had only to set an intercept course.

Beazley was shouting into the hand mike of the radio, 'Mayday, Mayday.... someone out there help us!' His voice was hysterical, and had lost its Southern drawl.

He was still incoherently yelling into the radio when he saw the big white ship bearing down on the Kingfisher, and the hopelessness of his situation registered on his consciousness. Beazley dropped to his knees on the cabin floor and cried out in sheer terror. Covering his face, he sobbed uncontrollably, 'Why...why is this happening? What in God's name did I do to deserve this?'

Beazley didn't have time to worry about his situation. High-powered bullets ripped into the hull of Kingfisher; one found the gas tank. The sport fisherman exploded in a ball of flame.

The motor yacht now sat with her engines idling while Kingfisher spewed out a tower of flame and black smoke, then finally settled below the sea. During the mayhem, the people on the big yacht had either lost sight of David, or had forgotten about him.

As he floated in the water some distance away, David watched as, with the pall of s

When modern-day pirates savagely murder his brother, David Colton finds himself drawn into an uneven battle against international drug smugglers. With the American authorities hampered by bureaucracy, and the international officials paralyzed by corruption, David must seek his own vengeance. From the azure lagoons of the Caribbean to the murky shoals of Long Island Sound, to the cold waters off the New England coast, the tides are dimmed with the blood of hunter and prey alike.

George Marshall lives on the coast of Long Island Sound, where he has maintained an association with the Coast Guard and has sailed for more than twenty years.