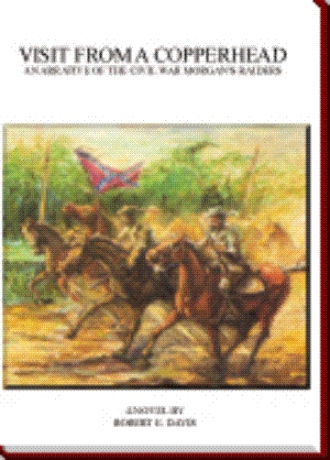 The supper was everything Ursula hoped it would be. She and Sarah and Jed were so relaxed and acted just like family.

" Ursula, I need to tell you about Morgan’s men passing through Palmyra yesterday. Cal wasn’t with them, or if he was, nobody recognized him. They were pretty mean to the people up there. They made the mill owner and old man Naberhuise give them all the money they had, or else they would have burned their business. They took anything they wanted from the store and from every house they passed. There’s a lot of hate up there. More than before. You better let me go to the store for you and you and Sarah stay out of town."

"I thought we had Home Guards up there! Where were they? Didn’t they put up a fight?"

"No they didn’t. They heard about what happened down in Corydon and as soon as Morgan’s men approached, they skedaddled into the country to hide. If they had put up any fight, Morgan would have killed them," Jed said.

When the meal was over they all worked at clearing the table and then went out onto the porch, in the fading light of the long afternoon. Jed read the newspaper to them. Ursula could read, but she could read and write better in German. Sarah had never had an opportunity to learn to read.

Little did they realize that Cal had participated in Morgans atrocities in Salem this very day.

"General," Duke addressed his brother-in-law more formally as they mounted their horses this morning of the 18th, "every house we approached yesterday was vacant. The dwellers were absent, as were their livestock. But on every table there were homemade pies, warm and fresh baked. This touching attention to our tastes is appreciated, right?"

"Duke, you know them pies are left as an appeal to us to propitiate us and prevent us from plundering their homes," Morgan said.

"Tell me, General," Lieutenant Peddicord asked, "why are all the women weeping as we ride by?"

"Lieutenant," Morgan replied, "women always weep at the thought of an eminent encounter. They know a lot of us are going to die, and they are already crying for us."

This historical novel focuses on the dilemma of a young Indiana family during the Civil War, specifically during the Confederate raid into Indiana and Ohio. Many residents of Indiana had roots to the bluegrass of Kentucky. Some of these men joined the Confederacy, making them orphans who could not go home for the duration of the war, and making the families they left behind ostracized in their Indiana communities. Previous fiction may not have fully considered such situations.

Confederate General John Hunt Morgan's famous Indiana and Ohio Raid, in July 1863, gave some of these men rare opportunity to make a quick visit to their homes. My character, C.C. Byrn, was one of these. His wife, Ursula, suffered traumatically because of the visit. She had to fight to survive on their little twelve-acre farm in southern Indiana. The community became increasingly hostile to her, with the exception of one helpful neighbor. She discovers she is pregnant. The neighbors suspect the helpful neighbor. Cal (Copperhead Colt, as his fellow troopers refer to him) is a scout for Morgan, reconnoitering the towns Morgan planned to hit. He eventually is part of the conspiracy to bring about Morgan's escape from the Federal Prison in Columbus, Ohio. But while Cal is away adventuring, Ursula is suffering!

Included are authentic newspaper reports of the Confederate Raiders, and the Union victory in capturing them.

The Novel is rich in characters and incidents. The wild ride of Morgan's Raiders is unparalleled in history. This fictional account of it makes it come alive for any who enjoy the Civil War era and Action/Adventure, including romance.

The chapters alternate between the raid and the family of one of the Raiders who lives in its path.

Live this six-month period with them! Expect a surprise ending!

Robert E. Davis is the author of six technical articles published by a national trade journal. He has published a feature article in the Louisville Sunday Magazine supplement titled 'Fallout.'

Short stories, including 'A Killing in Clay County,' 'Kentucky' and 'The Chess Tutor' were written for Indiana University Review. This is his first novel.

Robert was born in Kentucky and now lives in New Albany, Indiana. He is a life-long Civil War buff. He attended the University of Kentucky and is pursuing a degree at Indiana University Southeast. His hobbies include chess (he is a national rated tournament competitor), classical music (he is a violinist), and Bible class teacher. He and his wife, Mary, have been married fifty-one years.