The Tales of Tuffy, Adventures of a Native American Boy 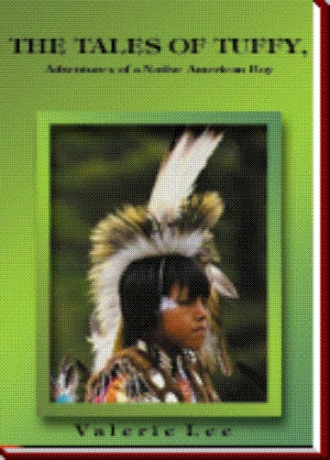 Once upon a time there was a tribe of Lakota Indians who lived in a village in the territory that would one day be called Colorado. The Lakota Tribe was peaceful and happy and had been blessed with great fortunes. They had their health and a bountiful amount of buffalo and food to eat. The village was near a river and not far from many streams and creeks.

In this village lived a five-year-old boy. His true name was Thunder Rider, but everyone called him Tuffy, a nickname given to him by his grandfather. Tuffy loved riding his pony, Blaze Of Fire.

Tuffy was a very rambunctious and inquisitive child, and because he was, he would sometimes find himself in situations that landed him in trouble. He just liked to learn and explore everything. He idolized his father, Night Hawk, and thought him a great warrior.

All the people of the village were close, protective and loving towards one another, and they loved to celebrate for any occasion. They believed strongly that the Great Spirit provided a happy, peaceful existence.

This book includes five stories written especially with children in mind, although I hope The Tales of Tuffy stories will be enjoyed by readers of all ages. These stories introduce us to a Lakota Indian tribe, happy, healthy and prosperous. The star of these stories is Thunder Rider, a five-year-old boy, who was nicknamed Tuffy by his grandfather. In these stories, I wanted to show Tuffy as a typical little boy who liked to learn and explore everything. From the moment I conceived the idea of writing these stories, I wanted the main character to learn many lessons resulting from the choices he makes and the actions he takes. These tales reflect fictitious adventures that a Native American child may have experienced a very long time ago. The lessons learned still ring true today within all ethnic groups, and perhaps for all times.

The first story, 'How Tuffy Got his Name and Pet,' describes Tuffy's recounting to his best friend of how he was given his name at birth. Since Indian storytelling is the way by which generations kept their history, Tuffy has inherited the formal voice of the storytellers he has heard since birth. His mother, pregnant with the boy, was gathering berries and wandered too far away from the village to return before a great storm hit. She sheltered under a ledge and gave birth to him. His father named him Thunder Rider for being so brave and strong during the thunderstorm. The story also describes how Tuffy got his pet wolf. He journeys alone to the woods and the great mountain where he was born and encounters a bear. A wolf saves him from the bear and he then keeps the wolf for a pet.

The second story, 'Tuffy and the Eagle,' describes how Tuffy accidentally frees an eagle that was brought to the village by his best friend and his best friend's father. They found the injured eagle on their way back to the village after going hunting. They wanted to mend the eagle's wing in hopes that it would be able to fly again. Tuffy goes to the eagle's cage and opens it in an effort to comfort the eagle. The eagle flaps its wings at Tuffy very hard and flies out of the cage. Tuffy decides not to admit to anyone about the eagle's disappearance. He suffers from worriment and guilt for many hours before finally admitting the truth to his friend. He learns a very important lesson from his mistake. A lesson he will never forget.

The third story, 'Tuffy and the Bow and Arrow,' describes a very special place where Tuffy and his father travel to, in order to experience their very first overnight hunting trip together. He learns many things on this trip and is thrilled to learn that one day soon, he will receive his own bow and arrows. It also describes the events that lead him into removing his father's bow and arrow from the tepee without permission, and how the bow ends up broken. Tuffy shows his wisdom in choosing to confess to his father before too long about the broken bow.

The fourth story, 'Tuffy and the Buffalo Hunt,' describes how Tuffy and his cousin sneak away from their grandparent's tepee to travel to the traditional semi-annual event, the Buffalo Hunt. Without permission, they ride their ponies to the Hunt and witness first hand how a Hunt is truly carried out. The story also describes how Tuffy's arm ends up broken and the many lessons he learns from his actions.

The fifth story, 'Tuffy Turns Six,' describes how and why Tuffy gets into a fight with an older brave protecting his best friend's sister on his birthday. The story also describes this important experience as a defining moment in his young life, as it pertains to his friend's sister. In spite of the fact that Tuffy gets into a fight on his birthday, his spirit and heart are ultimately consoled by the many touching birthday gifts he receives later that evening. He is left feeling very grateful for the many blessings he knows he has within his life circle.

I live in the Montgomery, Alabama area, and for over twenty-eight years, I have worked for the Federal Government. My favorite hobby is to read as much as I can. I am a mother with a teenage daughter. I am an ex-military dependent and traveled to many places as a child and teen. My favorite stop was when we lived in Kaiserslautern, Germany in the late sixties. I wrote a poem about leaving Germany and how much I would miss it when I was sixteen years old. I still have that poem, and I would say that by writing that poem, I acquired the incentive to write with a purpose. I have been writing on and off ever since.

I chose to write about a little Indian boy because of all the romance novels I have read and enjoyed featuring Indian characters. In reading the stories, I learned to admire the way the Native Americans lived in unity and harmony with the land. I could always imagine the adventures they must have had, especially as young children. I am very proud of my Tuffy stories, because I feel they are universal and can be enjoyed by all ethnic groups. I hope the readers find them entertaining, interesting and informative. Readers must keep in mind that my stories are fictional.