by Kirk A. Davis 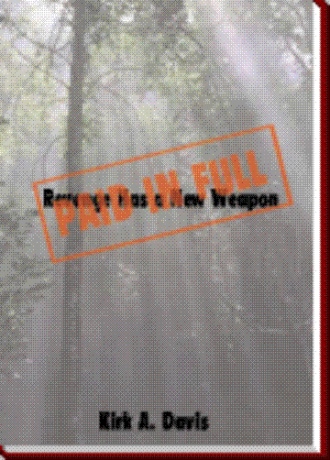 CHAPTER 2 The rest break over, Tango Company headed out at staggered intervals of roughly ten meters, in a broken line 150 meters wide. They slogged through the paddies, cursing the heat, the bugs, the Vietcong and their shitty luck in the draft lottery. Aaron worked his way over within earshot of the Lieutenant.

The Lieutenant looked back over at Sergeant Price and asked him what the hell he was referring to. Aaron politely pointed to the village.

'LT, when we hit the halfway point to the village, those folks working the paddies started drifting back towards the huts. We are less than 100 meters out and the workers are almost gone. The kids are gone, too. The only activity is a few adults still moving about.'

'Price, you'll make a great conspiracy theorist. You probably don't think Oswald worked alone, either. Did you ever stop to think that maybe, just maybe they're scared sh**less of us G-f*ckin'-I Joes? They're probably all hunched together in one of those huts bowin' to Buddha, or the goat god or whatever it is they pray to.' He contemptuously spat some of his chew in the general direction of Aaron, shook his head in disgust and continued his diatribe. 'You keep questioning me like this and you might come up short counting those stripes of yours when we return to Phu Bai. Now shut the hell up and go in there and do your god**mn job!'

Aaron debated shoving the LT's bars up his a** and leaving him here for the yaks to feed on. His sense of duty overcame what he felt was a perfectly rational urge and he continued to press on towards the village.

As they approached the perimeter of the encampment, the Lieutenant signaled for the men to form a crescent and as they entered the village draw tight into a circle, leaving little chance for anyone to escape. When the Lieutenant wasn't looking, Aaron gave his own hand signal. Proceed with extreme caution.

As Tango Company tightened its circle, several soldiers split off and began inspecting huts. One by one they came out shaking their heads. The village was now deserted. The goats were still meandering about, but the people had vanished. Aaron looked around in disbelief. There was no place to go and no reason to go unless this was a setup. A sudden thought struck him. Tunnels. He opened his mouth to warn everyone to take cover when the first mortar rounds struck.

Six explosions scattered around the perimeter of the little village struck in unison. One round fell closer, shredding a pair of soldiers who had just exited a hut, spreading their remains about and setting the structure on fire.

Those not immediately stunned from the blasts readied themselves for action and circled about trying to pinpoint the origin of the attack. The Lieutenant was about to order a retreat when the second wave of mortars landed, much closer this time.

Aaron had always told Connie that the LT would panic someday. Given the right situation, the LT would lose his head. That day he did - literally. A mortar round landing in front of him sent lethal shards of metal up through his neck, pulverizing the tissue and bone in an instant. His headless body wavered for a moment, as if readying for one final command, before crumpling to the blood spattered dirt beneath.

Aaron Price, former FBI agent, faces the hard truth. A debilitating nerve disease has crippled his ability for revenge and threatens his very life. His only hope lies with an old friend who owes Aaron the ultimate favor.

Past meets present to offer an unusual medical solution that provides Aaron his only avenue for retribution against a killer who will not give up and promises to come back. From the jungles of Vietnam, to a small business on the cutting edge of a cryogenics revolution and passage into the 21st Century, two men form a friendship that will take them beyond the bounds of life and death.

His first book, Paid in Full, contains a mixture of the full life he has led. Raised near Seattle, former resident of Nevada and married in Germany, Kirk now lives with his family in northern California. Between the end of high school and junior college, he lived in New Zealand for a year and spent a summer in Alaska commercial fishing. Four years in the Air Force allowed him to become a licensed vocational nurse, with experience in emergency rooms, chemical dependency and urgent care. Since then he has worked in various marketing roles, mostly in the rehabilitation industry.

He holds a master's degree in business administration from the University of Phoenix and is an adjunct faculty member, teaching marketing. He is currently the marketing director of a physical medicine and rehabilitation hospital in Northern California. He is hard at work on his second novel, Standing Eight.