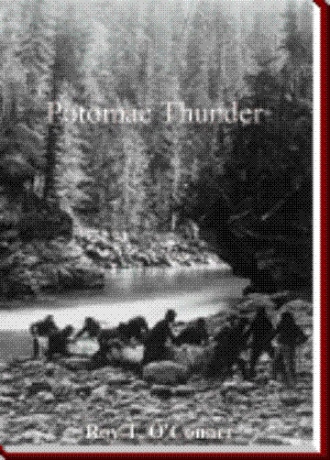 Potomac Thunder is a tale woven around historical fact, a thoroughly human drama of a nation split asunder in a tragic Civil War and how ordinary people coped with the conflict. A volunteer infantry officer, lucky to escape with his life after a climactic battle in Tennessee, is again thrust into the fray and is given an extraordinary assignment: deliver the Northern-born wife of a Confederate officer to her husband in Richmond. Through many hazards and over many obstacles, he unwaveringly keeps to his mission, learning more of himself than he cares to know, coming to admire the remarkable woman whose fate is in his hands.

In her own quiet and determined way, the woman at the center of the storm wroughts her own hard-won triumph, using her wit and will to ensure that no debt is left unpaid. Daring to accomplish the impossible, her determination and courage forge a victory of love and compassion over hate and retribution.

This intelligent blending of history and fiction portrays the violence of the conflict, the fragility of human life, the frailty of human resolve, and the endurance of the human spirit in a manner that rings true even today. Overcoming the ravages of war and their own shortcomings, the stubborn officer and the beautiful lady achieve a remarkable triumph of will and determination.

Roy O'Conner is an Education graduate of Indiana State University in Terre Haute, Indiana, where he was on the varsity wrestling team. Following graduation, he taught middle school and coached football, wrestling, and track at the high school level before becoming an Air Traffic Controller for the Federal Aviation Administration. He remained a controller for 25 years at various locations in Indiana and Illinois, including Chicago O'Hare and St. Louis Lambert airports, retiring in 1997.

Since 'retirement,' he has worked as a project manager in Indianapolis, Indiana, commuting weekly from Glen Carbon, Illinois, where he lives with Joan, his wife of 34 years. They have two grown sons, John and Dan, and one granddaughter, Julia. In addition to pursuing his fascination with the Civil War, his hobbies include flying, genealogy, sketching and painting, serving as a hot-air balloon launch crewman, and banging on an old guitar.