The Memoirs of Spider Jack Yates and other Strange Tales 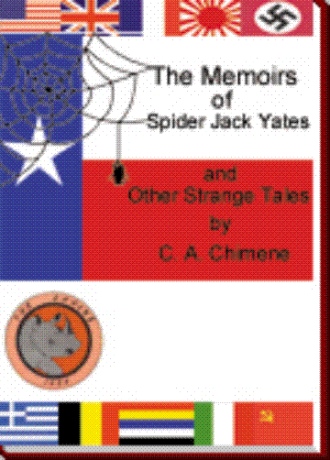 THE COLD WAR The doll was only twenty-one, brash, blonde and beautiful. Gazing at her naked body in the hotel room, I'd felt hungrier than ever before on a full stomach. We'd been drinking for hours in my room at the Mayflower, ever since she'd brought me the papers confirming my $20 million dollar grant by Congress to do a three-year study for the Pentagon on the 'Art of Chicken in Warfare.' It was the crowning glory of my ninety-first year. We romped in the sack for hours. Actually, she did most of the romping, while I was doing my best to maintain my breathing style, one of in and out. Afterwards, when I rolled over on top, I felt drunker than a twenty-year-old scotch barrel. She was higher than a space probe, as I tried to straighten her up morally, and have her on her way, but she was sticking to me as tight as a pocket full of used bubble gum in a steam press. The Cuban panatelas she'd been inhaling caused her breath to smell like sixteen feet down a smokestack, and her body was as hot as the top girder on the Hindenberg Zeppelin. When we kissed goodbye, her tongue darted in and out of my sagging mouth, slicker than the wheels on a sharecropper's truck. 'What a great looking babe,' I thought, 'but screwier than Daffy Duck's pinworms.' When she finally left, my mouth felt as dry as two miles down a salt plug and filthy as Uncle Willie's spittoon. I looked at my complexion in the mirror thinking, 'Muddy as Cameron Parish breakers and twisted as the pillars of St. Peter's.' The bed was as sloppy as a ten-foot mud-bog and quiet as a pigeon drop. 'Still,' I thought, 'things could be worse, and hopefully I'll live to see when.' The U.S. had been in the throes of the Cold War for years, and yet its convulsions were still indistinct. No doubt the report called for by this grant required a great deal of weighty reading. Heavier than three elephants and a concrete-truck. But what the hell, my eyes being what they are, astigmatic, far-sighted, bloodshot and bleary, I can't be expected to waste my time reading all that crap. Hell, no! I'm a research scholar. I'll just hire a staff of incompetents to perform that task, like the rest of the hotshots in this town do. Everybody in Government understands this, and what if they don't. Screw 'em! I got the jack, and the authority, I'll just delegate the responsibility. Then I'll have someone to blame if things go wrong - besides, if the Senators or Congressmen bitch, I'll cut down on my contributions to 'em. The next morning I stepped out of the hotel onto Connecticut Avenue, and found it was hotter than the Terlinqua Chili Cook-Off in July, and as oppressive as the ____, oh! Never mind. I decided that since I was required to be an 'equal opportunity employer,' I might as well blow this town off and head for Paris, France. There, I reckoned, I'd take two weeks and ostensibly pursue a personnel search for young good-looking French individuals, mainly girls, to do a bit of reading for me. Unfortunately, once there, I found, at fifty francs a crack, the services they performed were not only hard to put into words but were completely unreadable. On top of it all, the girls felt the salary so utterly laughable that many of them choked and we had to 'suspend operations' until I'd administered the old 'Helmholtz Maneuver' on them. This maneuver was invented by old Doc Helmholtz, a veterinarian who lived on Post Office Street in Galveston back in the thirties, to extract ham bones caught in the throats of houseguests, but I digress, possibly. I surveyed my remaining faculties and determined they could stand a trip to India, where prices for manpower were more to my taste. Once there, I quickly discovered I could hire the complete graduating history class of 1976 from the most prestigious university in Calcutta for $14.50 per week, which I did and posthaste. I signed them all up, depositing their first three-month pay in escrow at the First Calcutta Bank Trust and Grommet Depository.

Looking for a fast read with a lot of laughs mixed into your history, philosophy and drama? Look no farther! This is it! In the 'Memoirs' you'll meet a true, old-time Texas entrepreneur, one hard to forget. Spider Jack will take you on a fantastic romp around the world with his quaint metaphors from just before WWII trough the 'Cold War.' Follow him through his wacky meetings with Hess, Goering, Hitler and Churchill. Meet his paramours, Abby Van Cleft and a host of others, and check out his 'Texas Insurance Company.' His intrepid forays behind the 'Iron-Curtain' for Nazi gold brings him to introspection and a desire to retire, get a college degree and travel the world. His parties with the rich and famous in a frantic attempt 'to profligate' are a gas. You'll laugh at the depths of his personal 'Squeeze,' following his Hollywood debacle that left him in the 'Bing Cosby home for the erotically deluded.' Finally you'll experience his glory delivering an amazing classified report to the Pentagon brass and cavorting with a brash blond.

In 'Strange Inventions' you'll meet the improbable inventors, their strange contrivances and sample the epic poetry that immortalized them as the author mimics the style of your favorite poets. 'Short People' will allow you to peer with glee into the lives of these infamous small ones with a clear conscience, as all of their stories have a moral. You'll meet the dangerous Japanese 'Tiger of Borneo.' The incredible Guy Veaudeaux, a short, French resistance fighter, and famous cork-soaker. You'll meet a real Gnome of Zurich and the Dead Sea Trolls. You'll marvel at the truth behind the famous Hollywood movie 'Viva Zapata' and have a brush with real Irish leprechauns. In 'Truth Stranger or Fiction' you'll find the fun and how far a search for truth can lead you. Whether he is poking fun at the ancient Greek Philosophers, exposing the mirth in the Seventh Flag over Texas, or telling the hilarious story behind Napoleon's first battle against rockets in 1812, you'll find the author's use of language uniquely enjoyable.

The following short stories: 'The Looming Glower in the Gloaming,' 'The Laahaz' and 'Noblesse Oblige' all showcase the author's droll wit and irony, and show just how far the author will go to please you. 'The 'Z' File' will whisk you to the future and back through the pages of time to mankind's original beginnings, as divined by all-seeing scholars of the future, in a way that shocks and convinces the reader with its incisive wit and comedic whimsy. Finally, with the Caliph of Frankistan,' you'll meet an improbable pair of depression horse-race touts and their zany adventures at Epsom Downs, Houston's first racetrack. You'll meet a passel of quite interesting folk, from little Marvin, the Maestro and sweet Miss Emma Jean to the mobsters from Chicago. Alas, a more comic, yet poignant story will be hard to find.

The author, C. A. Chimene, now follows his first book, Hot Nights in Houston, with this 'completely different' anthology of his best comedic writings. He establishes a broad-ranging talent through the comedy, irony, satire and pathos of his characters and narrations. His unique way with words breathes life into the fabulous tales he lays before you, and together, with his senses of timing and humor, should have you rolling in the aisles.

Though most of his stories have a decided Houston, Texas flavor, mirroring his hometown, he goes completely 'around the world' with these tales. He belongs to the fourth of six generations of Chimenes that have resided in the 'Bayou City.' A veteran of WWII, he graduated from Lamar High School, the University of Texas, in Austin, with a BS in Geology, and received a Master of Science degree at the University of Houston in 1952. Chimene worked for Major Oil Corporation as both an explorationist and an executive until 1985 when he retired, started writing, and took over the reins of his family corporation. He now spends leisure hours at his P.C. tapping out poems, short stories, essays and novels. He is presently near completion on three more books and promises to have them in print in the near future.

He now likes to talk politics, religion, baseball, and football and tell jokes, but he is, of late, trying to conquer his lifelong infatuation for the opposite sex. Still, he admits he can 'be had.'