The Kiss of King Kong 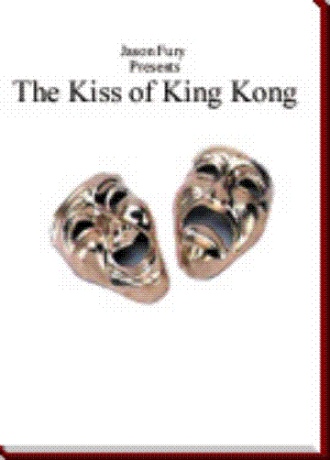 Preview of KISS OF KING KONG

The blank screen suddenly blazed with a man of dazzling beauty.

Against a jet backdrop, he startled with his radiant image, starting with his all-white attire-from sweater to slacks to shoes, and golden curls which gleamed like copper.

A warm smile instantly charmed his tough audience. With eyes both large and expressive and a figure perfectly proportioned, he seemed made for the camera. Sunny St. James. MGM Test l0. Sept. 9, l929

The voice of an unseen director said: 'Okay, Sunny, you're on. Tell us what you'll be doing for us.'

'I've been on Broadway in several Zeigfeld musicals and currently I do a special dance number in the musical revue, Radio Rhythm. I call my number, 'The Chicochita,' and this is what I'll perform for my test. Okay, boys.'

There were murmurs of approval from the MGM moguls. This guy looked absolutely perfect for movies! He was boyish, probably five feet and four inches, handsome and charming. A trio of black musicians behind him began blasting out the music: 'Hey you! Yeah, you out there!

'Until you've seen it, mannnn,'

'So let me show you how to do

With his hands on his hips, the entertainer rolled his eyes while moving and swaying.

'And that's all there is,

His voice was clear and expressive, he photographed like a dream-but, as he danced, Louis Mayer and most of the others stiffened. Then some nudged their neighbor. One producer buried his face in his hands and shook it. One assistant director flipped his wrists and patted his hair delicately.

When the test ended, Mayer glared at Thalberg. 'Hell, Irving, this kid's a flaming fagalah! Any moron would know he's nothing but a pansy!'

Taking his cue, one director executive howled: 'Put a dress on him and he'd be another Clara Bow!'

'We can hide that,' Thalberg said calmly. 'We've done it enough times before with Billy Haines and Novarro and a few others. We desperately need a song and dance man. We can't keep putting Charlie King in all our musicals. Let's use Sunny in the revue and if he's bad, we just cut him out.'

There was more grumbling and sniping but eventually Mayer agreed. Warner Brothers was buying up all the really good Broadway talent, leaving the other studios with the dimmer lights, if not the dregs.

'If we can sell a flaming fag like Billy Haines to the public,' snorted Mayer, standing up and rubbing his butt, 'then I guess we can sell this blonde little faggot. Christ, I gotta take a piss bad!'

The male hustler who became a superstar...the blonde dancer who dazzled Hollywood as its greatest drag queen...the stunning Adonis who became a stag film stud...they're all stars of Jason Fury's sweeping novel of old gay Hollywood...The Kiss of King Kong!

Set against the actual productions of such classics as King Kong, Wizard of Oz and Gone with the Wind, three gay men struggle to become part of that magical circle of immortal stars like Clark Gable, Garbo, Davis and Crawford. Only one succeeds--and ends up the worst of all of Hollywood's tragedies.

In l929, MGM didn't know what to do with a man as big and handsome as Mack Johnson. So they tossed him out on his can and he became a star of stag films. Moguls were appalled to see a man as swish and beautiful as Sunny St. James. They kicked him out, too, and he became the greatest of the Drag Queens. The Big Shots were thrilled with adorable, boyish Eddie Bostic. He became the 'new' Clark Gable-and then scandalized the film colony with his orgies starring a cast of boy toys. All three actors nearly star in Gone With the Wind until tragedy strikes. They're all here in Jason Fury's powerful panorama of old gay Hollywood -- The Kiss of King Kong!

Jason Fury is the pseudonym of cult author Jery Tillotson, whose tales of passion, drama and mystery have made him an icon among both gay and straight readers around the world.

Two of his books, Eric's Body and The Rope Above, the Bed Below have enjoyed multiple printings and continue to sell briskly today.

He worked as a journalist for fifteen years for several Southern newspapers and The Associated Press. 'I loved the writing part of my job,' the striking, golden-haired writer says, 'but the homophobia was relentless. I was happy to quit newspaper work in l978, move to New York and write full-time.'