Tales of the Dark Crystal 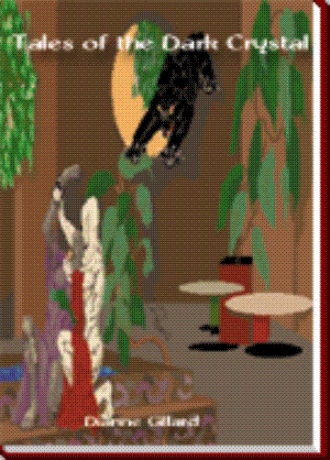 As they drew near, they saw Sy'leti appear to drop her guard, then Sutahn leapt forward only to have her blade knocked from her hand. It skittered across the stones and lay against the wall. Sutahn recovered quickly and grabbed the moirai about the waist, pinning Sy'leti's arms to her sides. The tu'ruq hurtled both of them to the floor where she would have the advantage. Sy'leti saw Sutahn extend her deadly fangs to strike, but had the presence of mind to bite the viper on the jaw, holding the tu'ruq's face immobile while bringing the pommel of her sword up between Sutahn's legs as hard as she could. Sutahn screamed and arched her back as the pommel pierced her pelvic floor; she pulled her face violently away from Sy'leti and tore a wound in her jaw where Sy'leti's teeth had held her. They both sprang up from the cobblestones and began circling each other warily.

Spitting the scaly flesh from her mouth, Sy'leti laughed long and low in her husky voice, 'Thee does not like my fangs either, eh, Sutahn? Here is one fang thee should like even less.' Sy'leti thrust the blade at Sutahn's belly. But the tu'ruq grabbed the blade and shoved the pommel into Sy'leti, knocking her down on the stones. Tossing the sword aside, Sutahn threw herself upon the moirai and pinned her arms outstretched upon the cobblestones. Once more extending her fangs, she aimed for Sy'leti's neck, shouting in triumph, her victory secure.

Alexias, too, slept restlessly in her empty bed as the stars came out over Kalax. She dreamed of power, and control, and secrets that the spirit should eschew-- Alexias looked across the dark night sky and beheld a solitary hand suspended in the air, wearing the signet ring of Hieron: the black swan upon an ivory field. The hand appeared to grasp a golden scepter and the stars shimmered, enclosing the scepter within a web of light. The scepter began a clockwise movement, advancing upon Alexias. And the wind blew about her as she felt the power emanating from the apparition. And her heart swelled with desires, dark and forbidden. The hand holding the scepter halted in the emptiness between them while the wind ceased and the universe waited in the breath of a heartbeat. Alexias reached eagerly for the scepter and the power, her breath coming fast as she stretched forth her hand. Then a shadowy form moved between them and a voice bade her awaken-- 'Thy allotted time has almost ended-- what has thee done for thy people, Alexias?' One by one, the stars winked out until only the scepter remained, wrapped in a cocoon of light, then it vanished suddenly and darkness overcame her.

Stopping beside a lemon tree, she gazed through the portico into the brightly lit room. The lace curtains furled gently around the columns in white billows while Alexias watched unobserved, as Lene brushed her raven hair. And the curtains became sea gulls, carrying Alexias across a vast blue ocean; and the clouds floated high above the water, like giant galleons searching for her soul. It seemed as though her dark nature began retreating, driven from her spirit by a gentle voice deep inside her mind, a voice reminding her of simpler times before she had been touched by the breath of ambition and power. Alexias felt drawn to Lene; a compelling force began urging her on into the dark moirai's quarters. But still Alexias waited, watching the silver hairbrush flashing in the moonlight down hair black as the Void itself; she realized intuitively that she had reached a pivot in time, no matter the direction she chose-- At last, the keltae bowed her head, then, having made a decision, walked toward the curtains and entered the room.

Lene looked up and put her brush upon the vanity. Her deep blue eyes smiled in greeting. 'Wine is on the table there, beside the fire. I am glad thee came, Alexias.' Lene stood up; her pale lavender robe shimmered against her ebony skin. The crystal about her throat remained clear; the full sleeves of her robe brushed the marble floor as she approached the low table beside the fire and poured wine into two goblets made of mouth blown glass. The glass had dichroic properties, so that the color appeared creamy beige until held before the fire, then the glass turned dubonnet.

Handing a goblet to the keltae, Lene remarked, 'How is it with thee, Alexias?'

Alexias held up her goblet, delaying her reply, watching the firelight play through the glass. The shadows gathered under her hollow cheeks, and she seemed torn between one thing and another. Moments past until she replied. 'I was remembering my past, standing outside thy room. A time before my innocence fled,' she laughed shortly, and her piercing blue eyes clouded with memories as she sipped the dark, dry wine.

'Pah,' Lene shrugged elegantly in mild derision, 'innocence is another word for ignorance. Virtue can never be truly chose while one is 'innocent'; one must be tempered by fire, or the soul's dark night-- when the shadows drown all light, and death becomes a pleasure to be pursued in earnest-- yes, then one may make an honest choice. When the dogs of despair howl about thy door, and the lees of reality taste bitter upon thy tongue, then a choice is made: whether to strive, lusting after imagined outcomes, or to submit to the will of heaven.'

Startled by Lene's outburst, Alexias sat down; leaning back, she regarded Lene silently, surprised at the dark moirai's passion. 'And what does thee know of choices, moirai? What does thee know of the dark power that laps against the soul, eroding confidence, nibbling away at the center of thy sanity?'

I awakened in my chair one rainy evening to see a tall golden haired creature of another species standing by my window. I stood up as she turned and smiled. 'What manner of being are you?' I asked.

'I am moirai,' she replied in a deep husky voice. 'I dwell inside another dimension parallel to thee.'

I looked up, startled. The ancient Greeks gave the name Moira to the three Fates. And they had much power.

'Aye,' my visitor replied, 'my species is quite similar to the word thee are thinking. But our story is quite different.'

I sat back down, she had read my mind -- I had said nothing. Clearing my throat, I replied courteously, 'I should like to hear your story, then, if you choose to tell it.' My visitor sat on the floor in front of me and replied with a most disarming smile, 'Excellent! Breathe deeply, relax thy mind and listen...'

But instead of hearing words, my mind was filled with pictures -- not a slide show, you must understand, but 360 degrees of total immersion. And when my guest, for by then I thought of her as a guest, had finished I wrote down everything I had seen.

And that is how this book was written ... Tales of the Dark Crystal is an adventure whose aim is to enchant and provoke the reader. A smattering of philosophy will be encountered within these pages in an effort to nourish the spirit. It is not a story for children, the species within these pages do have libidos after all.

But on rainy evenings, I sit in my chair and smile, remembering the golden haired moirai and the strange tale she told me about an old woman and a Shadow ... come here, sit in this chair ... join me.

A native Texan, the author grew up both in Houston and a small town called Brookshire, where she learned to hunt and ride horseback under the loving guidance of her father. She graduated with a B.A. in History from Texas Tech University. At the age of 25, after the death of a beloved friend and mentor, she moved to Phoenix, Arizona where she has lived for 29 years.

For eleven years, she worked as a Medical Technologist MT(ASCP) then changed professions. For fifteen years she owned a successful stained glass studio, The Creative Connection, where she designed and built stained glass windows. After a severe back injury, she used her disability insurance to put herself through Phoenix Therapeutic Massage College (y'all just cannot keep a Texan down) and after a 720-hour course, sat for the National Board exam for Massage Therapy.

She has written poetry -- one poem was included in the online game, Meridian59 -- and short stories for many years. But she felt Tales of the Dark Crystal was too damn good to remain tucked inside a drawer.