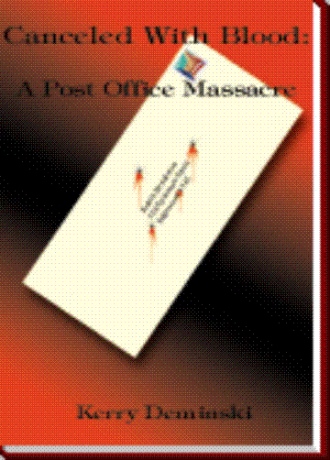 Mike O'Brien's chest was heaving with the effort to fuel his pumping legs as he passed the halfway point between the intersection and the five police cars parked in front of the post office. The officers were in the process of gearing up with bulletproof vests and protective helmets in preparation for storming the building. Two of them working near the open trunk of the vehicle nearest to the charging O'Brien spotted his approach and grabbed him. 'Let me go, damn it! My wife is in there!' He struggled futilely against the four hands clamped like steel bands around his upper arms.

At any other time, either of the patrolmen would been more sensitive to the distraught man's plight, but this wasn't any other time. They shook him violently in an attempt to nullify his panic. 'There are a lot of wives and a lot of husbands in there and we want to get them all out safely if we can,' one of the men said in a loud but surprisingly calm voice.

O'Brien was still wild-eyed, but he stopped struggling. 'She's eight-months pregnant,' he said in an almost-apologetic tone.

The two patrolmen looked at each other and simultaneously relinquished their grips on his arms. 'Man, do us a favor and wait over there,' the officer who had spoken earlier said as he pointed to a small crowd of curious onlookers standing near a convenience store across the street. 'I promise you we'll do our best.' O'Brien took in the sincerity and compassion in the speaker's eyes, looked at the building that contained his loved ones, and then walked across the street. The man who had spoken the reassuring words watched his departure as he tightened the Velcro on his vest. He turned to his partner and said, 'Let's do it.' They hurried to join the others on their way toward the building.

The last of the dark-clad figures disappeared inside the building. Except for the now-deserted patrol cars, most of which still had the roof lights flashing, the morning would have seemed normal. At both ends of the blocked-off street, O'Brien could see the traffic flowing by, and birds were chirping as they went about their business unaffected by the human folly taking place. One of the people in the crowd was a letter carrier in uniform who had been inside the convenience store when the event began. He was a large, powerfully-built man, but stood there openly weeping with his eyes staring at the post office. A small woman he didn't know hugged him compassionately. The letter carrier's bag was still hanging from his shoulder. That tableau was burned indelibly into Mike O'Brien's memory. He would never again be able to recall the horrible events of that day without visualizing the images of those two people.

Canceled with Blood: A Post Office Massacre is indeed fiction, but the author, Kerry Deminski, spent 35 years of his life working as a letter carrier for the United States Postal Service. The characters and events depicted are so true to life that you are immediately hooked and swept right along with them. The author pulls no punches in this portrayal of workplace violence, its causative factors, and its aftermath. Postal managers, clerks and letter carriers are defined with all of their praiseworthy attributes as well as their disturbing flaws.

But this work is so much more than an insight into the heartbreaking incidents of violence that have marred the record of an institution that touches the lives of virtually every American on a daily basis. You will share the sorrow of two young women who have been shunned by their parents for choices they have made. You will empathize with the anguish of a letter carrier still attempting to deal with the post-traumatic stress of fighting the war in Vietnam. You will meet a postal supervisor who will do whatever he can to see that his letter carriers get a fair shake, as well as a supervisor who will stop at nothing to make a reputation for himself in the USPS. These, and the many other characters that populate this novel, are masterfully woven into intricate situations and relationships, both on the job and in their private lives. After reading this compelling work, you will never again be able to think of any postal employee as a dull, plodding public servant who does not enjoy a rich, complex and rewarding existence.

It is a well-documented fact that a fiction writer's life experiences enhance the plots and characters that he or she creates. Kerry Deminski is a man who worked as a letter carrier for the United States Postal Service for three and a half decades, but also spent a lot of time before and during that period holding down other jobs as well. He worked as an armed guard for a detective agency, as a truck driver for a bookbinder, as a janitor, as a heating and air conditioning mechanic, as a theater usher, as a convenience store clerk, as a factory laborer.

While still a teenager in Appalachia, he spent three years working after high school and on weekends for an uncle in the trucking business, shoveling coal and shouldering heavy blocks of ice into hundreds of homes in that financially-depressed region. During these jobs, and others not mentioned, Deminski filed away in his mind all of the people he met and all of the things they said and did, hoping to draw upon these experiences to enrich the books he knew he would write someday. Now that someday has arrived, and the prolific author turns out one, sometimes two, novels every year. Kerry Deminski has also received royalties for song lyrics he has written; he has sold humor to Playboy Magazine; he has been granted U.S. Patent Numbers 5,755,438 and 5,788,706 for two of his inventions.