Beyond the Horizon: A True Life Journey to Destiny 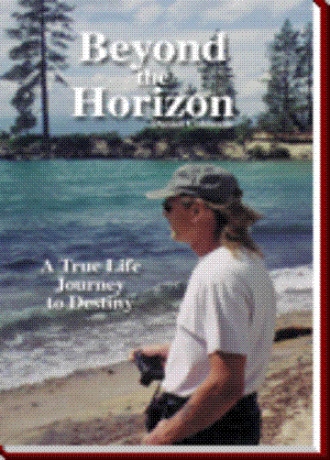 As we crossed the state line into Arizona I felt the urge to stop at a rest area. With soda in hand I crossed the fence and walked north for a few minutes, out of sight of my truck and passenger. When I returned, Robert gave me a weird look, but I said nothing except, "Let’s go." Little did he know I was as perplexed as he was. I had felt a strange and powerful connection with the land -- stronger than anything I had ever encountered.

As we neared Holbrook I made another unscheduled stop at the Painted Desert. I made a U-turn well before the visitor center and parked the truck on the shoulder of the road. I was drawn to the vegetation growing around this natural monument. I began to wander the land, which caused Robert to ask what I was doing. All I could say was, "I don’t quite know." Back at the truck I asked my friend to take a picture of me, and he did, without question.

Passing through Holbrook I became transfixed with the land on the south side of the highway, just barely keeping my eyes on the road. A river paralleled the interstate and it held my attention until we reached Winslow, where it crossed under the highway. A sign indicated it was the "Little Colorado River." Now that I knew the name, I was desperately trying to figure out what else went with it. It was a question I would probably ponder for some time.

Forty miles east of Flagstaff I pulled off the highway, crossed a fence and began wandering again. A few minutes later I returned and asked Robert to take another picture of me with the San Francisco Peaks in the background. He joined me beyond the fence and asked, "What in the hell is going on?" The only thing I could reply was, "The land speaks to me. I am being welcomed." This caught him totally off guard, but I didn’t know what to say except what I had felt.

We quenched our thirst and proceeded to Flagstaff, ascending the plateau into the high country of Arizona with plenty of daylight to spare.

As I looked around the area I realized that the mountain lake in California had been a precursor to this place. With an abundance of Ponderosa and Juniper pines, creeks and mountains, I could not shake the feeling I had been guided there by some unknown force. But everything here seemed in it’s proper proportion. It felt right.

Beyond the Horizon is a true story of a middle-aged man who returns to a mountain lake where he had a unusual experience nearly 30 years earlier. While there, he takes the opportunity to reflect on his life -- looking at the difficult time he endured during the last half of the 20th Century -- and what brought him full-circle back to the lake.

For years he felt somewhat out-of-step with both his family and society, so he pledged so solve the mystery that surrounded his life. During the journey he catches up with his past -- and also has a glimpse into the future. Seeing the two he comes to a greater understanding of himself and life, clearly seeing his destiny unfold.

'Beyond the Horizon is thought provoking . . . In my line of work I see many young people who haven't had the upbringing necessary to give them a solid value system -- these youth are desperately looking for something to latch on to -- and since that family unit has disintegrated, there has to be something ...'

'I could feel the author's passion for a better world bleed into Beyond the Horizon ... What he has to say about society will surely give thinking people pause ... This should be required reading for every high school student in the nation.'

'The perceptions of life in Beyond the Horizon are so different -- not in ways no one else has -- but in ways that are not talked about.'

Daniel Coleman is a first-time book writer who wants to make a positive contribution to our world.

As a father, stepfather and grandparent, he is concerned about our society and the environment for future generations of Americans. Having taught safety programs in the public school system, he has felt the pulse of our youngest citizens and knows the difficulties of today's youth.

A veteran of the U.S. Navy during the Vietnam War, he had an opportunity for international travel and came to appreciate the common threads within mankind and acknowledged the merits of peace.

Currently employed by a major automotive manufacturer, and having worked in an engineering environment for many years, he has watched technology far exceed its creators, seeing these 'scientific wonders' as solving only a small number of man's complex problems. The balance of the burden still lies on the shoulders of humanity -- setting premise for his book 'Beyond the Horizon.'

He is a graduate of Oakland College, Michigan, in the disciplines of Engineering and Business. Further studies included communications and metaphysics, giving him what he felt to be well-rounded education.

Born in Michigan, he migrated to California in 1976 and eventually relocated to Arizona in 1988 where he currently resides with his wife.

He is a member of the American Legion, and also an active member of a volunteer Emergency Response Team.

Since writing his book he has used his psychic ability to volunteer 'soft information' to local law enforcement agencies on certain unresolved cases; working in the background to bring justice to the families of the victims of violent crime.