A Vow Called Tenderness: A Path of Spirituality and Sexuality in Friendship and Marriage 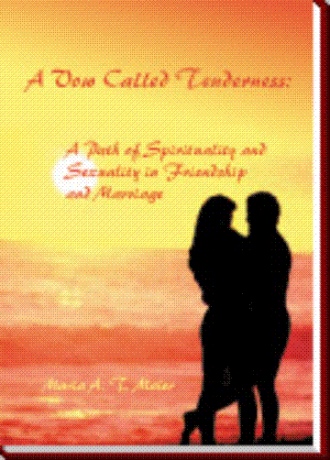 The discomfort is only exacerbated by a view of sex, sexuality and intimacy as somehow inclusive of one another. As the Whiteheads reflect, 'We can picture their relationship in three concentric circles. In this image, the smallest circle is the realm of sex. Sexuality, the next larger circle, holds within it the experience of sex but includes more. The largest circle, intimacy, takes in the realms of sex and sexuality but goes beyond to include other kinds of closeness.'

Although intimacy can certainly be brought into our times of sexual congress, it is wishful to submerge all sex concentrically within intimacy. For all intents and purposes, widening our understanding of sexuality to include our emotions and other forms of physical closeness has not sanctioned the redemption of our sexual behavior from guilt and repression. Instead, what has become an almost interchangeability of terms between sex, sexuality and intimacy has led to confusion and suspicion with a lessening of nongenital physical closeness in our society.

At the root of the problem is something that is commonly referred to as dualism. A patriarchal church and Judeo-Christian tradition have laid down a perspective and code of living which presume that the mind is superior to the body. And the spirit is an elevated, lofty and pure expression devoid of either mind or body, but especially lacking bodily urges or influence. The sexual revolution, feminism, and new ways of understanding physical intimacy have sought to resurrect the body and women, who as a group have been associated as the source of a man's bodily temptations. But instead of uniting the body, mind and spirit in a new way, the literature only clumps the same hierarchy in a new, positive light. Both, unfortunately, are erroneous and deluded. The ongoing dialogue and commentaries on the Song of Songs are a prime example. The Whiteheads remark, 'Nearly all Jewish and Christian interpreters have viewed this poem as an allegory, describing either God's love for the human soul or Christ's love for the Church. Its message they argue, is about spiritual affection, not about human, erotic love! --Only recently have scholars questioned this allegorical 'apology' for the Song of Songs. In 1953 the biblical scholar Roland Murphy challenged Cardinal Bea's interpretation, suggesting that the text be taken at face value-not as an extravagant allegory but as a poem in praise of erotic love. Following Murphy's lead, Daniel Lys, Phyllis Trible, and other scholars are helping the Christian community recover this biblical perspective on sexual passion. This recovery encourages contemporary believers to trust their own convictions about the goodness of sexual pleasure.' It is clear that the Whitehead's mean, by their many interpretations of the text of the Song of Songs is that explicit sexual intercourse, begetting children, initiating foreplay, are what is 'recovered', by the 'goodness' of the passages of the Song. But in fact, this becomes just one more allegory, albeit in a new direction.

'His left hand is under my head, his right embraces me' (8:3) When we truly view the text at its face value, it can be like a woman who in our introduction was holding her pregnant friend. In this case, it would be a male who embraces a woman. The scene conjures meaning from the posture of the woman who surrenders to this embrace. It is also moving in the way the woman is held, which for itself, describes him beholding her, comforting and sustaining her. This is an experience that stands beautifully for itself, and reveals dimensions of intimacy all on its own.

Further, we would have to extend the picture in order to reveal the meaning the Whitehead's would prefer. The male would have an erection, and the woman would be inviting in a myriad of ways, perhaps by her hand wrapped about his penis, something explicit. Though this does not alter the goodness or holiness of the passage, it does irrevocably change the brand of intimacy, the level of undifferentiated love, and whether we are viewing passionate love that is unconditional or provocative.

The leap to sexual interpretation while well intentioned, only imprisons the possibilities of such an example of tender expression to stand alone. While it is exactly this type of experience, liberated from an explicit context that frees us from guilt and shame, it continues, within a new dualism, to repress and deny a deeper, and more fulfilling way of love.

We know that the tender, nongenital touch we received as infants is precisely what enables our procreative sexuality to function properly as adults. It is much more reasonable to try a model of human loving which instead of concentric circles, looks more like Mickey Mouse, with tenderness as the body of the face, and sex and sexuality as the ears. In this Venn diagram, the 'ears' are given life and energy by the body of the face, but are also enabled to have a life of their own.

According to Freud tenderness was a sublimated sexual urge. Though many trends in psychoanalysis have parted from his thinking, we are still blurring the boundaries of what is something sexual, and what is tender love. The word 'sexual' has become an umbrella reference for almost everything that the body is capable of experiencing. The word 'tender' is used in and out of a genital context to describe care of an infant on the one hand and then a rich experience of solitary sex in the bathtub on the other.

But there is a world of difference between tender touch in a context of definite or even possible self gratification and a tender encounter that has either no self interest or a surrender of pleasurable expectations at the center of its intentionality. The former in comparison is simply not profound. Sex, true to its root meaning, can be a grim reminder of how cut off and separate we are from others. And any attendant guilt and shame may call out a reversal in direction of loving; instead of allowing our sexual expression to be fueled and nurtured from unconditional tenderness and love, it spins out into its own course, taking a life of its own. Erich Fromm emphasizes, 'The awareness of human separation without reunion by love-is the source of shame. It is at the same time the source of guilt and anxiety.'

The term 'making love' is used almost synonymously with sexual intercourse. Such a prevalent and accepted understanding is simply dangerous and reprehensible, and we are suffering for it. The implication is that love and intimacy are only an act away, that we can control and 'make' love. It also makes refusal of a sexual encounter, or physical closeness without a genital localization seem crazy or unhealthy. (everyone wants to make love, don't they?) All or nothing, we may only look at another or touch another with love if there is an opening for a sexual coupling to occur. Freud's notions are as much in force today as ever before.

While many have written about the problems and difficulties in dualism, this book courageously attempts a solution. Beginning with the historical conflicts within psychology by Freud and others of sexual behavior and feminine experience, the author brings the reader to an understanding that sex as we know it is purely a social construct.

With this in mind, even the 'facts of life' in terms of goal-oriented penetration (with subsequent fears of pregnancy and disease) is no longer a given, or even considered to be more natural.

The response is a revolution in love that begins with the ecstatic experience of mystical union on its ability to offer direct, unmitigated truth. Out of this very real and physical pleasure we are invited to work from the inside out, and unravel many of the myths and painful struggles with which our current understanding of sexuality is fraught. In groundbreaking detail, concrete articulation of an experience of highest consciousness of which the mystics themselves did not discuss, is brought to the reader. And solid, attainable, duplicatable results for the average self-reflective person are documented along with a step-by-step formula.

The result is a liberation that provides new postures and deeper intimacy in loving and lovemaking with neither the dangers of disease and immortality of a Liberal model nor the return to rigidity of staid Conservatism and old sexual roles and mores. Because feminine issues are at the core of any sexual construct, women will find a freedom in the untangling of common social assumptions which might cause a woman's sexuality (no longer a liability) to make sense for the very first time.

The Author brings to the pages of her work direct cultural experiences and relationships with persons at all levels of society, particularly the working poor and single mothers. She owns and operates Miryam Realty, a real estate company which specializes in low-income first-time homebuyers and non-profit agencies. She has taught real estate and has enjoyed past and present memberships in not for profit housing organizations and boards.

Her involvement in human development and spirituality had led her to conduct numerous workshops and lesturos over the years, most recently teaching in upstate New York. In addition to writing and research, she is currently a Network Administrator pursuing admission to doctoral studies in Psychology.