Lookin' at Luke Through the Eyes of Hope 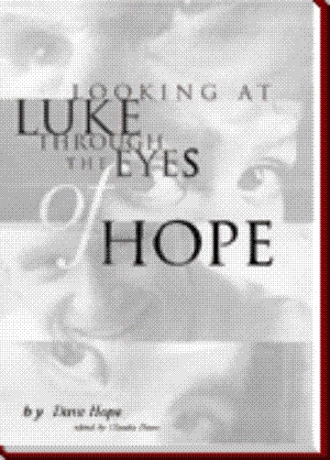 'Do not be afraid, Mary, you have found favor with God. You will be with child and give birth to a son, and you are to give him the name Jesus. He will be great and will be called the Son of the Most High. The Lord God will give him the throne of his father David, and he will reign over the house of Jacob forever; his kingdom will never end.'

'Do not be afraid, Mary, you have found favor with God.' Anytime I have ever gone to see an accountant, to a parent-teacher meeting, or have been unexpectantly called into my boss' office, and the first words spoken are, 'There is nothing to be alarmed about but ...,' experience and wisdom have told me to freak out. For some strange reason, words like these send an immediately signal to my body's moisture factory, which is under the impression that I really enjoy massive flooding in my armpits and palms at these times.

How would you feel if one day you were just doing your job of sorting mail down at the post office, when suddenly the vice-president of the United States showed up along with the highest ranking general at the Pentagon and declared, 'Don't worry or be afraid, the President's got a job for you and you're gonna love it.' Sorry folks, but my warning flags would be flapping in the strong winds of suspicion at that moment. Yet, Mary received an even more mind-blowing visitation from God's dispatcher concerning her job status and future with the company. If I had been Mary, I know a voice in the back of my head would be whining, 'Oh great, is getting pregnant ever going to mess up my wedding plans!'

Are we at the part where you are wondering about what I'm trying to get at? Well, here goes. Ever since I have been in Christian circles I have heard various statements come from people's lips that essentially amount to this, 'Wouldn't it be so wonderful to be able to walk in the anointing and power that the disciples, Paul and the first church did.' Then I respond with an answer that always gains me funny looks, 'Not particularly.' What most people seem to forget is all high callings come with a very great price. It's easy to look at an incredibly beautiful painting and want to be able to have the skills and abilities of the artist. But, are you ready to absorb the decades of being tutored, the incredible solitude, and the failed attempts required to learn the skill?

It seems we live in this Christian Disneyland where we think that God just zaps anyone, at any time with a power and mission with no cost attached. I am sure it was quite a thrill for Paul to be filled till bursting at the seams as he preached the word of God to the Gentiles. But, if God gave you the chance to experience the calling and anointing of Paul, would you also be ready to be stoned unto death? Or have your back laid open to the bone by whips several times in one lifetime? Would you sign up to experience God's presence, as few in this world have, if it meant standing naked and defenseless in front of a lion as he eyed your family while licking his lips? Or think upon how great it was for Mary to be enlisted by God when the job meant watching her Son take those nails into his flesh and slowly die in public, naked.

Have we come to think that God enables and empowers his people without purpose and for amusement? Do we think God grants great empowering upon those whom he hasn't tested and found faithful and obedient in the small things first? Why would God give a powerful, loaded gun to a child who just wanted the thrill of experiencing the power of its blast and recoil, but had no real interest or intention of aiming at the target? Just remember, all the 'powerful and good jobs' that are given out in God's kingdom come with high accountability and cost. Spiritual giants pay giant prices.

If we find ourselves feeling really flat and cannot figure out why we are not experiencing God like the first church did, maybe we ought to ask ourselves, 'Am I willing to pay the price like the early Christians did?' When we pray, 'Come Holy Spirit' and not much happens, maybe it would be good to consider this: No person alive will fill up the gas tank of an old car that is without wheels and on blocks. So it is with God. Why would he waste his precious gas on a vehicle that is not willing to move or go where He wants it to? Mary had such a willing heart, that God filled her up with his best high octane, His Son.

Dave Hope, the original player with the group Kansas, went from an extravagant, self indulgent, rock and roll life style to cleaning toilets in a little obscure church in the Florida Panhandle: all because of a 1980 encounter with Jesus Christ. Today he is Director of Christian Formation at St. Andrews by the Sea Episcopal Church in Destin, Florida. Drawing from years of diverse life experiences and his intense study of the Scripture, Dave now shares in his own unique and humorous style this commentary on Luke's Gospel. In his own words, here's why: 'Maybe my basic urge to communicate with you, the reader, stems from the fact that I enjoy reading and sharing the Bible. It seems we humans have this crazy trait instilled in us that draws us out of hiding to share with others whatever is making our day. I am sure you have had the 'I-just-gotta-share-this-great-joke' urge before. Or you have been in the path of the proud parent or grandparent whose duty it is to give a detailed account, pictures included, of their kids.

Sometimes the passion to share comes upon us when we bite into a great piece of pie that makes us do that weird humming sound when we first taste it. Then we immediately slide the plate across the table to our company, and with a full mouth mumble, 'This is great, try it.'

I think this is as close as I will get to answering my own question of why I am writing. You see, just like a great piece of pie, when I taste God's word it has the same effect on me. You know that weird, musical, humming sound that comes from your insides and on up through your throat when you're satisfied? That same sort of sensation happens to me when I read and really connect with God's word. I believe God's word is meant to be a type of music that is to be tasted and heard with your heart. Once digested, it can carry one's imagination and soul to places where it normally wouldn't, or couldn't have been able to go on its own.

'Before I met Jesus in 1980, my stock and trade was playing in a reckless and crazy rock & roll band. This might seem to some a disqualification for making any sort of intelligent scripture commentary. And if that's not enough, I have some other great credentials to add that. First, I have only a high school education, and as I think it's not much of one at that! Out of the time I spent in school. I can only remember three classes: Smoking in the Boys Room, Advanced Sleeping in Class, and I think the third one was some kind of Physical Awareness class. All I can remember doing was checking my pulse every few minutes to see if my heart was still beating, because the sensations of being bored to death were not to be ignored.

To further add to my resume and add filler for the record, I come from a divorced family. I smoked three to four packs of cigarettes a day for numerous decades and there was a period of time that I was one hundred pounds overweight. I polluted my body with cheap chemicals in the 60's, only to graduate to more expensive ones in the 70's because my musical career became more lucrative.

My mother is a born-again Jew and my brother is a Christian lawyer -- really. When my father was alive, he was judge back to Kansas which is where I was raised. I will not go into my spectacular achievements in marriage or romance, because that would drag in innocent people whom I still love. I hurt them and all I can say is I am truly sorry.

All I am trying to convey is this: If you're looking for that 'all America' role type, I'm not it. I would not want to mislead you or have invest your trust and time into someone who is claiming to be something he is not. But if you are interested in listening and chewing over some thoughts about the Bible with someone who's a little torn, dog-eared, and been around the block, I'm your man.