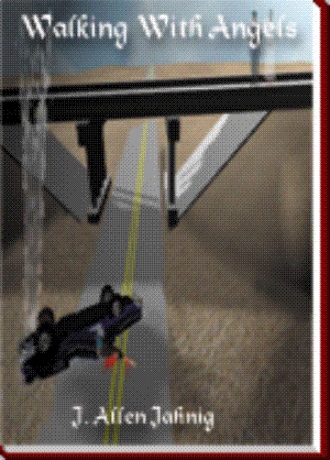 A serious car accident in the winter of 1989 changed my attitude completely regarding whether or not there is a God. The car I was driving struck a bridge, and I was thrown from it as it rolled with my family inside. My knees felt as if they were about to buckle as I witnessed my body lying below me. Then a spiritual escort approached and said six short words. I was taken on a journey that I will never forget.

Much later during this passage, a path took all of us to a bridge spanning clear, running water. All the while as we moved along this path, we all were moving much closer to a white light. All the while, I had been looking for my family. While on this bridge, I was confronted by another Angel in a white robe. I simply would not allow myself to concede that this Angel could possibly be greater than any other angel.

Afterward, a question remained with me-- Did this Angel touch me? This Angel, alone, had the power to give me life, or leave me to face judgment. I knew that at this impending judgment I would not have a prayer. None. I was also fully aware that this Angel had the ability to impact the outcome of my healing, if I were only allowed to get that far.

I wanted to live. I was willing to mend my selfish, self-centered ways, if only-- I felt guilt beyond words. It was only then that I realized that because of my resistance for the first 29 years of my life, had effectively asked Him not to touch me. He clearly held control of this situation in His hands.

The question still remained with me-- Did He touch me? I knew that soon, so much more than I had ever imagined possible to lose was soon to face peril. Peril of a magnitude, that only the day before, I had never given serious consideration. Despite my lack of seeking His face for all those years, He reached out to me by coming to me on that bridge. At that time, I did not want Him to leave me. Now, I know He never will.. Looking back, I was clearly given much more patience and time through each step of this journey than I deserved. He changed my life, starting from there. He did this, not by touching me with His hand, but by touching me with His Holy Spirit.

Afterward, I was hospitalized for months. My medical records documented that I 'often cried,' during therapy. What was not captured on paper was that I had no other way to express, or in any other way communicate the pain. And still, my body healed long before my soul. But I did not take the easy way out. It has been said, 'Nice guys finish last.' To them, I simply say that they forgot to consider the actual length of the running track. Eternity goes on a long way!

The 26 chapters with brief descriptions follow:
Chapter 1 Who Is Your Leader?
The journey with angels
Chapter 2 The Accident
No less than nine miracles unfolded in the proper order, for me to be alive today
Chapter 3 My Body Healed Long Before My Soul
The Emergency Room at the first of three hospitals-my family's turmoil
Chapter 4 Separate the Sin from the Sinner
Chapter 5 If I Could Only Wake-Up
After being airlifted to a second hospital, what my wife found in a hospital bed
Chapter 6 Being Focused
My father's role at the hospital, and his thoughts after the accident
Chapter 7 When 'Has' becomes Past Tense
My daughter sings to me while teary-eyed
Chapter 8 If Only--
After recovery, a tribute to my four year-old daughter's courage
Chapter 9 Transfer back to Aberdeen, South Dakota
Chest restraints, and a mitten so I can't pull out the tubes from my body.
Chapter 10 Numbers Change
My wife's only wish for Christmases in the future,
is just to be able to talk to her, 'That would be enough.'
Chapter 11 Much Like a Pencil Eraser--
Christmas Eve, 1989, alone with my father
Chapter 12 All Energy is Derived from the Son
Remembering so much more than I wish to remember
Chapter 13 We Have Reclaimed the Colors
The beginning of speech
Chapter 14 'Had it Been Better, if I Hadn't Made It?'
Chapter 15 Not Losing Sight
Chapter 16 I Was Not Trying Hard Enough (by my standards)
Being held up to parallel bars, unable to hold on.
Chapter 17 Proud, Fair, Memories
Chapter 18 Humbleness Deserves Respect (-Editor)
Testing my memory, shakes in my hand, and writing in my personal log, (-it was illegible)
Chapter 19 One Can Only Look Back, If One Wishes to Thank
Using my right hand was painful. I tried to overlook the pain, because
The pain was my friend. Because with the pain, I knew that my hand was still there.
Chapter 20 We Survive
Daring myself to shower. What we can learn from prairie dogs.
Chapter 21 God Brings Focused Independence
Stairs? The promise from my physical therapist.
Chapter 22 Never Dismiss Because not Visible, Nor Felt
My wife tells me that even if I can not recover any more than right now, -that's OK with her. She couldn't ask for more.
Chapter 23 Needs, Not Wants, Will Be Met
Chapter 24 The River Still Flows
Chapter 25 The Lord Will Decide
Chapter 26 Truly A Miracle

The book begins with my detailed experience when an angel escorted me to unearthly places after a serious car accident. I had previously thought heaven could not exist. Now I not only believe, but I know God exists.

The book also details what God did for me after this car accident. God took a self-serving, and very broken man and allowed me to become His. This book recounts the hurdles that God saw me through, such as the possibility that I could end up in a nursing home at 29 years of age. It was possible that I could never walk again. I was told that I might not recognize my wife and children, or even remember them. But, my God has never forsaken me. Now, not a day goes by that I do not say 'Thank you,' to the Lord above.

Walking with Angels is meant to encourage all to get their life straight with God. In addition to the accident, recovery, and rehabilitation, many of my revised focus, after-accident thoughts are captured throughout the book. One of which is:

I believe that if you can truly admit how blessed you are, and truly say that you are thankful with all of your being..... You are blessed beyond any blessings you can see, touch, or hold.

I was born in 1960 in the town of Britton, in Northeastern South Dakota in the United States of America. After I graduated from High School in 1978, I furthered my education in Aberdeen, South Dakota. I have served in various positions in several hospitals since my graduation from college in 1982. Until 1998, I was in process of pursuing a master's degree. It was not until after the accident 10 years ago, detailed in this book, that I was finally able to put many aspects of my personal life 'together.' (My wife would never admit it, but at certain moments, I still am).

I have an outlook on life that I previously never had. Life is a gift from God. Since this accident, I have a deep appreciation of life, and of my family. Before, I never experienced the daily gratitude to the Lord above. But now I do--more appreciation than most can ever imagine. I need not be reminded that my life was almost taken away. I believe that if it had not been for my encounter with a special Angel, it would not have been possible for me to be here today. Now, I must get it right the second time. I hope not to disappoint the 'Master' again. I have also served on various church committees and treasurer of a 2000 member congregation. Before, this would not have happened.

I would like to give a special thank you to the editor of this book, Steve Heffernan. Steve is a friend who took my unstructured essays and took it upon himself to put these in some sort of readable order. I think he has done extremely well. A remarkable point I will share with you is that he was able to do this while battling multiple sclerosis (a.k.a. M. S.). Thank you, Steve!