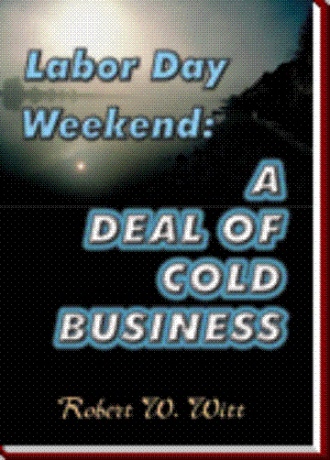 'Lewis,' Mark said with exasperation as he opened the door, 'what are you doing here? I told you I didn’t want to see you tonight.'

'And I told you I wanted to see you.' Lewis’s tongue was somewhat thick and he had difficulty focusing his eyes in the light.

'Doesn’t make any difference. I want to see you.

'No. Not tonight. Go home. I’m not letting you in.' Mark stood firmly in the doorway.

'All right, Lewis,' Mark made an effort to control the anger in his voice, 'I’m not putting up with this. Now get out of here.'

'I’ll get out when I’m damn good and ready to get out.'

The two men stood near the door facing each other. Mark moved forward as though he were going to force Lewis out the door, but Lewis shoved him backwards again. Lewis was a big man, larger than Mark, and the force of the shove sent Mark stumbling backward several steps.

'You’re warning me! I am warning you. That’s the way it is. I’m the boss. I’m the one who says when and what.'

'I changed my mind. It’s not going to be that way.'

'No, you do not! That’s just what I’ve been trying to tell you.'

'Fine with me, but it has to be my way.' Mark moved away as Lewis approached him.

'No, Lewis. Not tonight. How many times do I have to tell you that?' Mark moved farther away.

'What’s the matter? You afraid of me?'

'No, I’m not afraid of you.' Mark stood still as Lewis moved up to him and started unbuttoning his shirt. 'Lewis . . .'

But Lewis ignored the warning. He finished unbuttoning the shirt, put his hand inside, and began stroking Mark’s side and stomach.

Labor Day Weekend: A Deal of Cold Business tells the story of a murder among the country club set of a small mythological town in Kentucky. Mark, a handsome hustler, is involved with both an older man and a wealthy younger woman, both of whom are supporting him. After the murder the sheriff, who is gay, allows the wrong man to be charged because the prime suspect is Mark, who is also his lover. The novel details the sheriff's struggle with his conscience until he decides that he must do the right thing, no matter what it will cost him.

Robert W. Witt, a member of the faculty at Eastern Kentucky University, has published numerous books, articles, stories, and plays. His two previous novels, Hour in Paradise and Toxic, were published in 1993 and 1995. Various of his plays have been performed in California, Kentucky, New York, and North Carolina. At the university he teaches courses in both Shakespeare and creative writing.