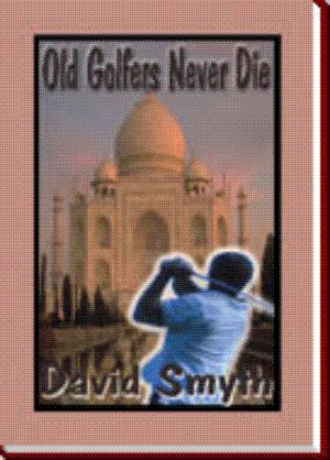 The storm clouds were rolling low overhead and there was a mutter of thunder in the distance as Flynn stepped up to the tee of the eighteenth hole. He sighted down the fairway and addressed the ball. This was the culmination of his career, the zenith of his life as a golf pro. The best Kuramitsu could conceivably hope for on the 310-yard last hole was a miraculous two-under par drive and a chip shot right into the cup. All Casey Flynn had to do was finish the last hole with a two-over-par six, and his sixteenth major title was in the bag.

Casey Flynn was now on the verge of the greatest triumph in golf history, eclipsing Jones and Locke and Cotton and all the other great golfers of the past. He would be the game's greatest inductee into the Hall of Fame, he would have his own permanent place in the Guinness Book of World Records. And eventually, outdoing all his great predecessors, he would be the only golfer to be entombed, like Napoleon, in his very own mausoleum, in the center of his own empire. For the Flynn Mausoleum would rise after his death to become the central shrine of world golf, a long-term source of income to his estate, in the middle of the Casey Flynn Golf Course at the Casey Flynn Country Club. And before that day arrived, there would, of course, be many long and profitable years as a senior on the over-fifty circuit.

Flynn raised his driver behind him and paused at the top of his swing in momentary immobility before the mighty downward sweep of his last drive of the tournament.

Winning the Open, Flynn thought once again, as he brought his golf club down, was worth a million dollars at least in fringe benefits. Commercial endorsements, appearance fees, television plugs, residual royalties, all would be rolling in like a mighty tide after today's victory.

It was at this moment - in which an enterprising press photographer lying on his belly in the grass caught him forever in a Pulitzer-prize-winning shot, with Flynn etched against a stormy sky, raised club slanted against a background of roiling clouds - that lightning struck.

'Lightning,' as TV anchor Walter Jackson repeated over and over in endless replays of the fatal moment, 'is airborne electricity moving at sixty thousand miles per second. There is no way of running from it. The flash is a high voltage spark several miles long. It strikes targets like metal golf clubs, trees, umbrellas and fence posts because they are higher than the ground.'

'People near the spot where lightning is about to strike sense the change in electrical charge along the ground. Their skin tingles and their hair floats up as though attracted by static electricity.'

Fifteen million viewers around the globe saw all these physical manifestations actually occur as Flynn raised his driver and the UBC television crew thirty yards away captured on its zoom lens the actual lightning flash that ended the Flynn career at its moment of ultimate triumph.

'The electrical force knocks out the body's muscles, stops the heart and the muscles that inflate the lungs,' Jackson explained in replay after replay. 'The heart may restart spontaneously, but the lungs remain paralyzed and the victim suffocates.'

Flynn crumpled to the ground, his fall captured in slow motion by the TV camera. An unidentified doctor in the gallery rushed out to give first aid. Three other doctors soon ran up, led by Dr. Joseph Pepperdine, the U.S. Open's director of medical services. For fifteen minutes they worked over the prostrate champ with heart massage and mouth to mouth resuscitation. But, as fifteen million TV viewers saw, all to no avail. The great Casey Flynn was dead.

The cause of death, on the certificate signed by Dr. John Moore, director of emergency medical services at JFK Hospital, where the illustrious remains were taken, was cardiac arrest.

In the apartment at Sutton Place in New York, Itchy was in the kitchen getting himself a beer and a sandwich when the lightning flash struck Flynn down, but he was back in front of the TV just as Jackson was interviewing Fortinhouse van Spees on camera.

'Are there any plans to discontinue play for the day?' Jackson asked.

Mr. van Spees twisted his finger anxiously inside his collar. He sensed that this was a moment for one of his fatal verbal gaffes. 'Well, we obviously feel very badly about this,' van Spees said. 'But I have discussed the matter with Mr. Angus MacTaggart, and I agree with him that suspending play is not an option. According to the rule book, Mr. Kuramitsu must finish the round. Otherwise, strictly speaking, he has not won the U.S. Open. While we deeply regret Mr. Flynn's passing, if we go by the book we can list him as losing by default only if Mr. Kuramitsu actually completes the round.'

'Hey!' Itchy shouted. 'Gervais, Jane, look at this on the tube. Flynn's dead. Jane, call Bruce in Chicago and tell him to fly down to Eisenhower National at once. Tell him the body's at JFK Hospital in Dixie City,' he added as the news came in of Flynn being declared dead on arrival at the local hospital.

Itchy then rushed to the phone himself.

'What are you doing?' Gervais asked.

'Calling the airline, of course,' Itchy said. 'I've got to get to that JFK Hospital before any other undertakers get to Flynn.'

Is there a golf nut in your family? If so, don't look any further for presents this year. This nutty novel is just the gift for him on his next birthday, if somebody doesn't brain him with a putter first.

In Old Golfers Never Die, Inc. two wacky golf promoters (Yitzhak 'Itchy' F. Suzuki and Gervais ffrench-ffoukes) and one television evangelist (the Reverend Eustace Muddlestone) undertake to develop golf into what it obviously was always meant to be -- a secular religion. The culmination of their dream is the creation of an awesome Global Inter-Faith Center of World Golf at Shoreham, Long Island, New York, on the premises of an abandoned nuclear power plant.

The star attraction is to be the embalmed body of Casey Flynn, the greatest golfer who ever lived. Flynn is struck dead by lightning just as he is about to win the U.S. Open -- his sixteenth major world title. Itchy and Gervais have a contract with the champ to exhibit his preserved body in a heroic golfing pose. But Okada, a billionaire Japanese golf club tycoon and super-boss of one thousand Japanese gangsters, has hatched a sinister plot to hijack Flynn, plus twelve other deceased American golf champions, and smuggle them out to Japan.

In a climactic final scene at New York's Kennedy Airport, Itchy, Gervais and Muddlestone confront Okada in a showdown for possession of America's departed golfing greats.

David Smyth is a former Associated Press writer and editor who now writes fiction (fiction being more fun). In his thirty-three-year career at the international news agency his assignments included the Olympic Games, the Pan American Games, and other major sports events.

As for golf, he grew up in a house situated next to a golf course, and his earliest memories include the thud of errant golf balls bouncing off the roof like ricocheting bullets. And then, minutes later, the sight of intruding golfers poking about with their golf clubs in the flowerbeds and clambering up the drainpipes in search of their wayward missiles.

Is this novel his revenge on golfers? Freud might say so, but actually Old Golfers Never Die., Inc. is just a sober look at the achievements of two golf promoters and one television evangelist who set out to develop golf into what it obviously was always meant to be -- a secular religion. Baptism by total immersion in the water traps, clubhouse mausoleums for golfing greats, on-course burial privileges for club members, walkman Sunday services for pious players -- these are just some of the ideas they put into practice.

Any questions? About lost golf balls? Or anything else? Just e-mail David Smyth at Currell@aol.com