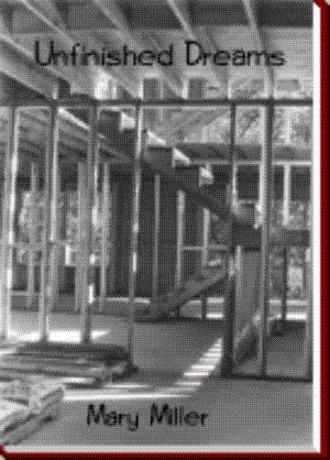 The faded blue station wagon bounced off the paved road onto the dirt. The approach road to the new house had not been paved and probably wouldn't be for several years. Development had happened to the north and south, but this stretch of fifteen to twenty miles had remained untouched.

Fred slowly pulled into the driveway and looked up at the new house complete with red bricks and white columns. In the haze from the dirt road it looked oddly reminiscent of their old home in Atlanta.

'Fred,' Abigail asked, still blindfolded, 'are we there yet?'
Fred nodded as the dust settled. 'We're home.'
She beamed under his red handkerchief/blindfold as he opened his door and rounded the car to help her out. He took her by the hand and carefully escorted her from the car to the house.

As they approached, he guided her past leftover construction debris still scattered about the site: mounds of bricks, discarded 2x4s, an old rusted wheelbarrow, and empty mortar bags. Abigail stumbled in her high heels as Fred helped her across the front lawn.

'Careful. Watch your step. I've got you.'
Abigail, holding Fred with her right hand, blindly groped her way forward with her left. In her gabardine suit she was more appropriately dressed for lunch at the club than scaling a construction site.

'Where are we going?' she asked, the first tinge of doubt creeping into her voice.

'You'll see.'
She stepped forward bravely, and in doing so inadvertently stepped on a loose 2x4, which flipped a full box of framing nails into the bottom of an empty metal cement mortar vat. She jumped back into Fred's arms.

'What was that?!'
'Nothing,' Fred said. 'Just some old nails. Nothing to be scared of, it's just a little farther.' He took her hand again and led her up the front steps one at a time.

'Fred! Slow down, I can't see!'
With that Abigail swung her free hand out and knocked over a ladder by the front door.

'Oooooowwww!' She winced in pain, letting go of his hand momentarily to cradle her own. Then, suddenly, Fred leaned over and picked her up in his arms. 'Fred,' she hollered, 'have you lost your mind? Put me down!'

But instead Fred opened the front door and carried Abigail across the threshold like a new bride.

'Hold on tight,' he said as he made his way to the center of the house.

'You'll throw your back out. We'll end up in the hospital. What a way to spend Christmas,' Abigail protested all the way, unable to see and unable to walk. Undaunted, Fred continued to maneuver his way to the center of the room.

'We're almost there. Keep your eyes shut,' he said, as if she could open them.

'Put me down. Please, Fred. Stop.'
Fred stopped so suddenly it surprised her, and she quickly grabbed him around the neck to keep from falling.

'Don't drop me, Fred! Don't drop me!!'
'I've got you,' he laughed. 'Let go.'
She did and he gently put her down and stood her in the center of the house. He then untied the blindfold, removed it from her eyes in one sweeping motion, and held his hands up high in the air.

'Tatatatatatatadummmmm!'
Abigail stood stunned. She blinked several times, trying to focus, like a person suddenly roused from sleep. She felt flushed and swallowed hard, looking at Fred and then back at the house.

It was a disaster. The exterior walls were nothing more than stud walls with the doorframes and windows cut out. The interior 'walls' were simply a series of wooden 2x4s spaced 16 inches apart, except where they had been cut and braced leaving holes for future doors. The electrical wiring was strung between the 2x4s and the plumbing pipes and ventilation ducts were visible through the openings. The 2x4 'walls' acted as rudimentary dividers separating what would be the kitchen from the dining room on the left-hand side, and the living room from the library on the right-hand side. Directly to her left, in what was to be the 'kitchen,' was a future bathroom complete with a toilet and tub fixtures but no walls. In the center of the entrance hall was a wooden staircase, the treads and risers leading to the upstairs floors. In the middle of the would be 'dining' room was a pair of wooden sawhorses with a plywood sheet over their tops doubling as a table. The overall floor was just a series of long wooden planks littered with piles of 2x4s, nail kegs, mortar bags, and other construction items.

'What do you think?' Fred asked, still holding his arms up proudly in the air.
Abigail dropped her purse to the floor, looked at him in disbelief and then back at the unfinished room. 'Think?' she repeated, unable to think. 'Think?!' she asked incredulously as she walked over to a 2x4 stud and touched it lightly with the tip of her finger, hoping it would all disappear like a mirage.

'It's a little rough, I know,' he admitted, fully acknowledging that there were still a few loose ends that needed to be tidied up, but...

'A little rough?' she interrupted before he could finish the thought. 'A LITTLE ROUGH?!' She turned back and looked at the 2x4 mess. 'Fred, what is this?'

'Our house.'
'Oh, no, no, no, no,' she said, refusing to believe. 'This is not our house.'
She pointed to the wooden 4x8 tongue and groove plywood subfloor. 'I don't know whose house it is, but it is not our house?' She walked across the wooden floor adding emphasis with each step. 'It can't be our house,' she repeated as if in prayer as her eyes welled with tears.

'Yes, it is ...'
'NO!' She put her hands over her ears. 'No.'
'Yes. Over there is the kitchen with a dishwasher ... disposal ... washer and dryer ...' Fred said. He pointed to invisible appliances as he proudly ran from unfinished 'room' to unfinished 'room' being careful to go around his 2x4 walls.

'What kitchen?!' Abigail asked as she walked through the wall into his designated 'kitchen.' 'There's no kitchen here. Fred, I don't see any kitchen. Do you see a kitchen?'

'Sure.'
'Where???'
'Here.' He started to point, but Abigail turned to the 2x4-doorframe, grabbed the wooden stud, and shook it with all her might.

'YOU LIED TO ME!!' Tiny flakes of sawdust began to fall around her like snow as she held onto the stud.

'Not a whole year,' he said.
'It might as well have been.' Abigail steamed ahead, fueled now with frustration that had been building since the first day he'd left. 'I'd see you one day and then not again for weeks.'

'You could have come down.'
'Come down and stayed where?' Fred turned and pointed upstairs, but before he could answer, Abigail continued. 'Besides I had a job! I couldn't just up and leave. People were counting on me. I had responsibilities, obligations, there were houses to sell and ...' Abigail abruptly stopped and thought back to her own house, which she had sold in that wild, impulsive moment. She pictured the Bekins moving van making its way down I-75 with everything they owned in it. '.... ohhhhhhh Fred!!' Her voice cracked with emotion. 'Just look at this place! It's nothing more than 2x4s!!!'

When Abigail Addison invites the whole family down to spend her sixtieth birthday in the house that Fred, her husband of thirty-five years, built on an island off the coast of Georgia, she finds the beautiful red brick home with white columns somewhat lacking ... lacking paint, lacking plaster, lacking walls! But, as each member of the family arrives, they see a different house. Fred, the dreamer, sees it for what it will be. Abigail, the realist, sees it for the unfinished mess that it is. And their grown children, Margaret, Babs, and Lizbeth, look at it all as a last great adventure, reminiscent of their childhood and the house where they grew up in Atlanta.

Together, as they struggle to bring the walls of the house up, their individual walls begin to come down, until at last, at the height of the chaos, they are forced to re-examine themselves and each other ... and, suddenly, a house with no walls becomes a home.

Not since Mr. Blandings Builds His Dream House has a more likeable fellow set out to build his dream home. Not since the 'Gift of the Magi' has a wife's gift of love created such havoc. Based on a true story, UNFINISHED DREAMS is the funny, often poignant love story of one man's family and the house he built off the coast of Georgia.

From the GREATEST GENERATION to the BABY BOOMERS, this book will strike a chord with everyone who has ever undertaken the task of building a home or simply adding a room. And it will touch anyone who has waited until the prime of his life to embrace those UNFINISHED DREAMS.

Mary Miller was born and raised in Atlanta, GA, and graduated from Westminster High School. She received her B.A. at Hollins College in Roanoke, VA, after having studied at the University of London in London, England, and Davidson College in Davidson, NC. She gained her theatrical experience from years of work in New York City, first as an actress and then as a playwright.

As an actress she appeared both on stage (Off-Off Broadway) as well as on television. For two years she worked on the daytime soap opera All My Children. Preferring writing to acting, Mary turned her attention to plays. She made her New York debut as a playwright with the production of LIGHT BURGERS WALTZING THROUGH THE GARDEN WITH JOE. She went on to win the Dayton Playhouse Future Fest with I WITNESS. After the publication of her short play 'FERRIS WHEEL' in the anthology TAKE TEN by Vintage Books/Random House, her work began to receive international attention. Since then she has written a number of both full-length and short plays, won over a dozen national playwriting awards and had her work produced throughout the United States, Canada, Europe, and Australia.

After a ten-year stint in New York City, she moved to St. Simons Island off the coast of Georgia where she continued to write and see her work produced. While on St. Simons Island, she became involved in radio and worked for WMOG hosting the 'Open Mike' show, a live morning call-in program. From radio she moved into television working for WBSG-TV. There she wrote, produced, and served as anchor on the half-hour television series 'Close-Up 21.'

Two years ago, wrestling with ideas that were bigger than the stage, she turned her hand to novels and has subsequently written UNFINISHED DREAMS and A MATTER OF GRACE.

She currently lives and works in Atlanta.