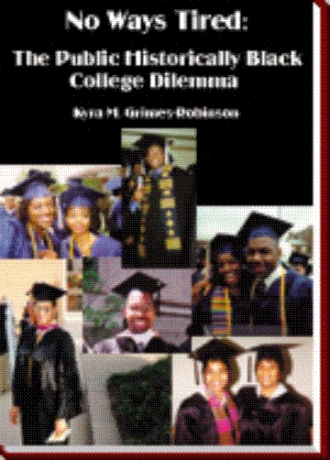 Anthony, director of public relations and alumni affairs, said while black institutions should not be expected to implement other race goals and objectives, the predominantly white colleges and universities should institute these same objectives. He provided a few reasons for his opinion. First, he questioned why other race people, or minorities in the case of HBCUs, would consider an HBCU, unless it was because they wanted exposure to a different culture. Second, Central State does not have comparable facilities and resources to Wright State in Dayton: '[At Wright State, they] have access to many things we don't have here. I'm not saying that to put us down, but I am saying that it would be ridiculous to ask us to maintain a quota system for minority students when nobody is providing us the resources to do what we are presently doing.' Third, Anthony believed instituting the same kind of standards at predominantly white universities would ensure that they are making a good faith effort to recruit African Americans and others as well. Adding to his argument, Anthony stated that it is easier for historically white institutions to recruit and retain African Americans than it is for HBCUs to recruit and retain Caucasians simply because this is a majority-controlled society in which the perception that African-American institutions are second-class is prevalent. Furthermore, he noted that African Americans have been programmed to accept that white is right, best, and superior.

Tennessee State University
The Tennessee State responses varied widely. Porter (former National Alumni Association President), Whitfield (Alumni Relations Director), and Dixon (Student Government Association President) were all on one accord in saying that neither HBCUs nor historically white institutions should be forced to implement and maintain a quota system, or a certain percentage of minorities. And, if such policies are implemented, they should be equitable and just across the board (Dixon). Moreover, Porter added that he fails to see the necessity of quota systems. In referring to Tennessee State's Stipulation of Settlement, which 'requires that we reach some magic percentage [of other race students] in order to have some degree of parity,' Porter doubted if that method would ever work. According to Porter, the most simplified resolution to this is to guarantee equal access to all schools and provide support services unique to minority groups so that they are afforded the same opportunities to progress. Even so, Porter did note, as did Central State's Anthony, that recruiting African Americans is much easier for white institutions because they have the money, resources, and that many African Americans think white universities are better.

Both Qualls-Brooks (Director of Public Relations) and Smith (National Alumni Association Vice President) had differing perspectives on quotas. While Qualls-Brooks stated the need for quota systems at HBCUs is contingent on existing conditions, she had more to say about instituting them at predominantly white institutions: 'They shouldn't be forced -- they should just do it, like we've [HBCUs] done it. But, if you're not going to do right, then you should be forced. HBCUs have always done right, never turning anybody away.' Smith agreed with her, stating that as wrongdoers, predominantly white colleges and universities have 'a greater burden to correct that which they have done wrong, and when you're the instigator of segregation, then there should be a greater obligation to do more for [a] longer [period].' This is not to say that all of the responsibility for integrating should be placed on the historically white universities. In order to achieve a white presence on HBCU campuses and to overcome resistance, quotas and goals may be an effective remedy initially. However, these goals should not be permanent solutions (Smith). Kentucky State University

The answers given by Alumni Affairs Director Peale and Staff Writer Bunton-Douglas reflected Kentucky State University's current integration status. Under a mandate by the Kentucky Council on Public Higher Education, all state-supported institutions must meet specific goals in recruiting other race students and faculty. Ironically, this mandate has had an adverse affect on the amount of African-American faculty at Kentucky State: 'I'm in favor of the quota system because that would've forced us to hire more African Americans to teach the kids. The faculty numbers are lagging. Out of 140 faculty, about 30 African Americans are full-time. The desegregation order would put us up to about 42 percent' (Peale). As for maintaining these same other race goals at predominantly white institutions, Bunton-Douglas saw nothing wrong with them because, as Tennessee State's Qualls-Brooks and Smith also said, these institutions 'have a history of not letting us in.'

In a closely related matter, Peale stated the admission and retention of African Americans at historically white institutions should be looked at separately, as 'they are doing great from the admissions standpoint, but on retention they're doing awful.' For HBCUs, Peale contended that they are doing a better job at graduating other race students who are admitted. It should also be noted that the Kentucky Council on Public Higher Education has stipulated that none of the state universities can expand programs if they are not in compliance with Kentucky's desegregation plan (Peale).

Nurturing. Cultivating. Inspiring. Uplifting. Resilient. Enlightening. Encouraging. Struggle. Progress. These are but a few descriptions that capture the very essence of an entity that has touched and empowered a people for over 150 years. While small in number (109), HBCUs (Historically Black Colleges and Universities) are mighty forces and beacons of hope and educational access.

The 'HBCU Experience' can be found at Howard, Fisk, Mississippi Valley State, Morehouse, Tougaloo, and Shaw, to name a few. Simply put, these legacies have left an indelible mark on the educational history of African-Americans. These institutions are to be cherished and revered forever -- or lost as the 21st century approaches. Threatened daily by internal and external forces, HBCUs are fighting one of their toughest battles ever.

A native of Dayton, Ohio, Kyra M. Grimes-Robinson received a B.A. in English from Fisk University in 1993 and a M.S. in Journalism from Ohio University in 1995. No Ways Tired evolved from her master's thesis. A devoted crusader for the cause of historically black colleges and universities, she has been employed as an Academic Advisor and Sponsored Programs Officer/Grants Writer at Harris-Stowe State College, one of two public historically black colleges in Missouri and the only HBCU in St. Louis. In her spare time, she enjoys listening to gospel music, participating in the Couples' Ministry and other ministries at her church, Omega, and reading African-American periodicals and literature, including her husband's short stories and novels. She and her husband, Chet, currently reside in Dayton, Ohio, where she is a local school district employee.