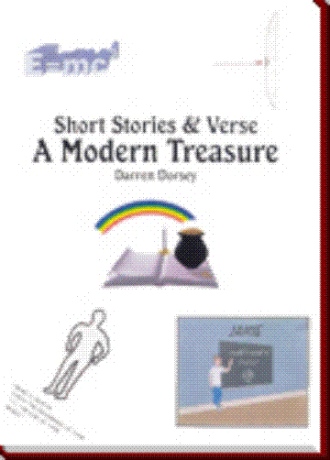 THE STORY OF JONATHAN

From a hardened string and my firm archer's grip, The arrow sliced through the air led by its soaring tip. It charged and pierced the apple's core; This brought on the triumphant roar. I was a champion, a victor of any feat That I, and my trusty bow and arrows, would ever meet. I had respect of all my fellows, especially the young. I seemed greater than any hero they had ever sung.

My summer at camp soon came to end, So my ego left its lofty trend. I was greeted at home by Mom and Dad. To see me safe, they were exceptionally glad. I laid my bow and arrows to rest aside And returned to my usual urban stride.

One day, while I was in the park, alone, and free to roam, I was greeted by a young kid whose name was Jerome. He remembered me from camp as an archer of skill And wanted to be friends, for me only to will. We grew closer, as he said, became 'tight'; Our newly-made friendship seemed timely and right. He marvelled at my fascination with astronomy, mythology, and birds. And I envied his talent with music and words.

I remembered the first time I went to visit Jerome's place. It was a memory that I could not ever erase. I got some strange looks from the people in his neighborhood. I would have run if I could. Jerome wouldn't have forgiven me, if I would.

Some of Jerome's friends gathered around Over which my height did abound. We 'broke the ice' and got to know each other, And for the first time, I became known as a soul brother.

Suddenly, I would receive an ugly twist of fate; For two tough dudes would come and shed upon my head their hate. As I struggled to free myself from the oppressor's strain, I felt in my side a sharp pierce of pain. I fell to the ground, looked to Jerome, and said: 'Remove me from this place of violence and ill-will.' He was not pleased and remained silent and still. At the hospital, I was weary, shaken up, and little afraid, The only bright spot was the flowers on my bedside some kind people laid.

I was visited by Mom and Dad, who wished me well. They said how fast I will heal, time will tell. Jerome came bearing a gift To see if it would give my spirits a lift. This was an opportunity I would not pass; I opened it and found a gold-tipped arrow of brass. 'All my friends, who are your new friends chipped in... To show that we do have good will,' Jerome said with a grin.

In a matter of days, I was ready for the first day of school. It was sunny and clear, with a subtle, morning cool. There were many more people than I had expected, And most of the older kids, I tended to have respected. As the year went on, I made some good, new friends. As with Jerome, we stuck together throughout all ends. However, the in-group made it very clear That we were at the lower end of the school's social atmosphere, Especially a guy named Billy Who called us nerdy and silly.

At the end of the year, our school planned a camping trip for May. By that time we were packed and merrily on our way. It seemed to be a pleasurous trip for a while Until Billy sat behind me with a cynical smile. He mocked: 'Behold, it is Robin Hood. He would shoot me with his narrows, if he could. Why he is so goofy is not understood.' I had to put up with that meddling all the way going. My impatience and intolerance were constantly growing.

For a hike, we were instructed to form a double line To stay away from Billy, I lagged behind. We trekked through a forest deep and long. We could have only been led by men brave and strong. Suddenly, at the front of the line, screaming arose. From a distance a bobcat took a frightening pose. It leaped down with a fierce roar And fell to the ground as a bleeding gore!

In a matter of time the creature had died With a gold-tipped arrow in its side.

The poet, 'born again' at age eleven, became a child of promise, beloved among his contemporaries. Having escaped the early years of innocence and mischief, he moved on to years of awkwardness and isolation. As an adult, he became a brilliant personage, submitting papers on relativity to Princeton University, where the late Dr. Albert Einstein had taught. At age fifteen, he had become 'disturbed,' leaving a potential great epic of prose and verse incomplete, but had a poem from it published in the American Poetry Association's 1985 American Poetry Anthology. Much recognition followed as Mr. Dorsey ascended into the top ranks of the International Society of Poets. Mathematics was Mr. Dorsey's first love as a child, as he memorized his time tables up to 12 x 12 as a six-year-old kid under the strong discipline of his grandmother. He won the prestigious United States National Math Award twice as a young adolescent. At age fifteen, he was the only student in his class to take an honors version of Free Enterprise. Four years later, he passed the National Association of Securities Dealers Series 6 examination at the young age of nineteen. Unsuccessful as a registered representative of First Investors, he went on to graduate from a notable business school. Encouraged to further his education, he went back to school to get an accredited degree. There while reading a book called Dawn Over Zero, he learned Einstein's conversion principle, and from then on decided to major in physics. The poet had contributed numerous poems to various prestigious organizations, like the International Society of Poets, American Poetry Association, World of Poetry, and others. He has won awards of merit such as an Editor's Choice Award from the National Library of Poetry.

He also has been awarded certificates of recognition for contributing to our nation's cultural arts, and has been awarded the prestigious Who's Who in the South and Southwest for the years 1999-2000.