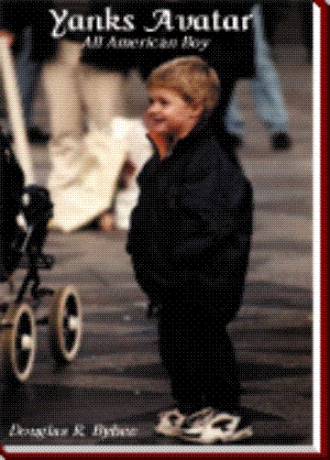 Contrary to popular opinion, Knuckles abhorred violence in general. What he did subscribe to was violence in a circumscribed condition, violence within the chalk lines, roped off violence.

On April 5, 1970, Laser Johnny Von Pulp and Deep Water Rivera stepped outside the lines in Keokuk, Iowa to debate the designated hitter cabal taking root in Cuba. The debate raged down the alley, past Ducky Nice's Ice Cream Parlor, past Handsome Kile's Used Cars, and settled in back of O'Grant's Eight Hour Meats. The participants were summing up.

'YEAH?'
'YEAH!'
'YEAH?'
'OH YEAH!'
'YEAH?'
'YEAH!'
Lost in the moment, Laser, a trained observer of human fear, nonetheless noticed that his own puffed out chest was appreciably less in diameter than Deep Water's raised & blue veined biceps. Not to be outdone, Laser raised his ivory blue veined .45 magnum and blew Deep Water's torso into a meat indistinguishable from, and mixed with, the boneless ham steak display in O'Grant's purposely frosted over side window.

Ballplayers throughout the country were shaken; this Cuban virus could spread. A meeting was held in Walla Walla, Washington to develop sporting violence rules. It goes without saying, Knuckles chaired the convention. The now famous Yeah-Yeah Rules were published later that same year.

THINGS YOU MAY HIT SOMEONE WITH

THINGS YOU MAY NOT HIT SOMEONE WITH

The rules were religiously abided by sporting men for years. The Yeah-Yeah Rules defused all life threatening sport's conflicts until July 4, 1974, between games of a robust doubleheader somewhere in Kansas. In the midst of the all too common fireworks' argument over whether The Rainbow Fire Lantern or The Rainbow Stars Connection should be first off, Babe Triage killed Chuck 'Chucky' Ducks by repeatedly short stabbing him in the neck with a live rainbow trout.

The Book.
Yanks Avatar All-American Boy is a narrative cartoon; a mighty funny story completely different from anything you've read to date.

The original intent was episodic satire of all they sell us to read at leisure; adventure, romance, new-age, poetry, religion, science fiction, mystery, sports, horror, and maybe even erotica, all the genre of American popular books. Fortunately the satire of it is somewhat lost in the good yarn it weaves. Yanks Avatar is no genre and all genre, it's Yanks in the summer whorehouse, The Great Pea Wagon, the Giant Hand Brothers, Beans Barlow The Midget Who Batted .672, Jake The Inflatable Dog who can inflate to be anything but Wayne Newton, and Knuckles Kloof shooting through the supermarket, bare naked, backwards on his wheelchair and Elvis Presley's face.

A sophomoric adventure, a poor man's Catch 22, and if you read the quick pages and don't enjoy at least three great heaving belly shakin' laughs then you may come to my house for a free lunch. Yanks Avatar is as cheap as it is inexpensive.

Yanks Avatar is the first book of The Landow Trilogy; see The Unauthorized Autobiography Of Jake The Inflatable Dog in 2001, and Colors In Arcane in 2002.

In 1962 Doug Bybee dated the first Weather Gal to compare hail size to balls. In 1968, using the moniker Rumba Rumba Rumba Dandy, he found no work whatsoever as a professional escort.

Mr. Bybee has a certificate instructing him to do community service -- and so he wrote Yanks Avatar, the first of The Landow Trilogy.