The Feminine Solution to all the world's Problems 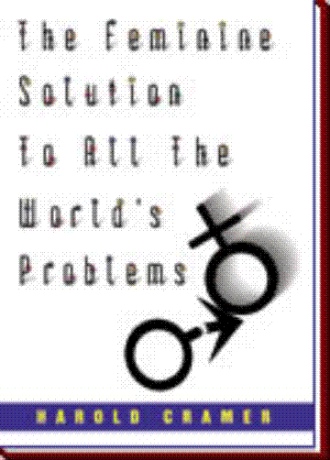 The Venus solution originated in the mind of a twenty year old woman from Bombay, India, who traveled to the Pashwa province to attend the funeral of her uncle. She always remembered the day vividly because of the heat and dust and agony. She stood and watched as her aunt, her mother's younger sister, was cremated alive along with the dead uncle. Just before he died, the uncle had decided he could not bear to part with his wife. No one thought to inquire whether the wife could bear to part with the husband. That day was the defining moment of her life. An attempt to bring charges against the stupid monks who arranged the funeral was dismissed by the authorities because the perpetrator, her uncle, was dead.

Two weeks later, the twenty year old woman went to the temple house of the monks in the dead of night and set it on fire. No monks were injured, but a historic temple lay in ashes. She told no one of course; the cause of the fire was her secret. The woman left India, never to return, and set out to see how the other half lived.

Some time later, the woman was part of a UN relief effort in a central African country. The relief group tried to keep women and children fed and healthy. The men, armed with automatic rifles and machetes, prowled around taking whatever they wanted of the relief supplies. She watched an erstwhile tribal chief, who wore a grotesque metal and wood headdress and a Western business suit, kill two of his five wives with a machete because they upset him. Tribal custom did not permit interference with a chief's prerogatives.

The woman from India took part in another international relief effort in Afghanistan; and watched three male religious fanatics with stout clubs beat a woman to death because her black sarong did not cover her ankles.

In her travels around the world, the woman saw environmental degradation on a global scale. Forests leveled, fields eroded, earth and air and water contaminated. Burgeoning populations were everywhere because women were kept pregnant from puberty until death, from dawn until dusk, and denied contraceptive help. The politically religious were especially vindictive about that. Again, no one seemed to notice that the vindictively religious were almost always men. Men who felt a God given duty to go around telling everyone else how to live.

The woman met with cruelty, stupidity, and exploitation everywhere she traveled in the world. And all of it seemed to have one cause in common, men. Men obsessed with denigrating women, and the environment, and others, to get and keep anything that their feeble minds thought they wanted, to exact horrible penance for any small slight their petty manhood encountered. Some time later, the woman came to the United Nations Secretariat in New York City. She encountered an organization run by a cabal of self important and stupid men, few women; all from small countries of no importance; who spent most of their time in first class airplane cabins going to and from first class hotels all over the world. They acquired this behavior by emulating the corporation chiefs of the world. Men, always men, who had turned exploitation of people and resources into an economic dictatorship, complete with its own philosophy of social Darwinism, assiduously studied in universities using, incredibly enough, mathematics. And more incredibly still, the philosophy was annually awarded a Nobel Prize from some ridiculous Swedish bank attempting to curry a reputation on a dead man's name; as if it were something actually worthwhile.

Based now in New York as part of the United Nations establishment, the woman became familiar with American and hence Western social values and she saw the same attacks on women and people's rights. However, the attacks were not done with machetes, or sticks, or bullets. No, the West used lawyers and politicians. Lawyers well versed in an open ended legal system that could be bribed and politically manipulated. Politicians intent on maximizing their supporters' salaries and hence contributions to their own reelection, and minimizing health and welfare and housing and anything else of value for women and children and exploited employees. The Venus solution to all the world's problems did not originate as a program that could actually be accomplished through the wonders of molecular technology; but as a philosophical concept, as a blueprint for managing humankind; as a way to do the most good for the most people; as a way to do the least harm to those coming out of the future. It was only necessary for women to replace men in all the important positions around the world, and goodness and mercy would follow as the brightest daylight follows the darkest night.

Are women kinder and gentler than men are? Do they cause less trouble, less crime, less of most things bad? Would the world be a better place if women were in charge of everything and men were, at best, an irrelevance? This is a story about some people who thought so, and what they tried to do about it. Of course, any change in life is bound to be noticed, especially if it occurs without any reasonable explanation. Busybodies become concerned and want to know what is going on and why. Others decry talk of any sort of change and want to put a stop to it and return to the golden days of yesteryear, when they were in charge. This story is about them too. If you like political thrillers with suspense and satire, try this tale.

Harold Cramer was born in Pennsylvania and still lives there. He has been a student, a steelworker, a chemist, a salesman, an engineer, and now a writer. His only qualification for writing a book with the title The Feminine Solution.... is being male, and therefore endowed with an objective and complete misunderstanding of women.