Spiritual Spokesmen of the Ages: The Men Who Inspired the World's Major Religions 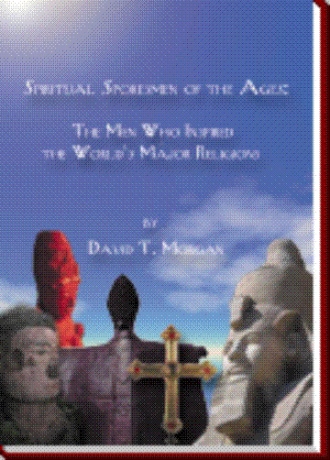 Millennia ago some human being, perhaps staring at the stars on a warm clear night or watching a violent storm approach on a late afternoon, whispered to himself or herself that somebody far bigger than man or woman is out there in the vastness of space. That first speculating person probably concluded that the envisioned somebody (or, more likely, somebodies) is the force behind creating and sustaining all of nature. For Christians and Jews who view the Old Testament of the Bible as literal truth, that person had to be Adam, whom they consider to have been a real man, the first human being to walk the earth. According to this literal rendering of Hebrew scripture by people committed to the orthodox Judeo-Christian view, God directly created Adam and communed with him until Adam sinned and spoiled the relationship. Thus, adherents of this perspective would tell us that even from the beginning man has known that God was there, that he was the creator of the universe and all that is in it, and that his power knows no limits.

But what of those who have not been part of the Judeo-Christian tradition? To a Hindu in Delhi, Adam is a mythological figure as much as Krishna is to a Jew in Tel Aviv or to a Christian in Kansas City. Since most people in the western world have never known any religious explanation except the Judeo-Christian one for the creation of the world, they usually overlook the views of billions of people who have walked the earth in total ignorance of Yahweh (i. e., the name of the Hebrew God as rendered by many scholars from the Hebrew consonants YHWH) and Jesus Christ. This could be said of the ancient Egyptians, Babylonians, and Persians, for example. A portion of those billions lived long before there were any Jews and even longer before Christianity made its appearance. Most of them, but not all, believed in many gods, and some of them, like the Hindus and the Zoroastrians, developed sophisticated systems of theology.

It should be born in mind that there is great debate over the date of the Genesis account of creation. While most orthodox Jews and Christians might set it at the time Moses lived--sometime around 1300 B. C. --others would argue for almost a thousand years later. Even if the earliest possible date is accepted, civilizations such as those noted above had risen and fallen before Moses or some other Jew or Jews wrote the creation story of Genesis. Most scholars date the written version of the creation story (long attributed erroneously, it seems, by orthodox Jews and Christians to Moses) no earlier than 500 B. C. And it must not be overlooked that the Genesis account of creation is a religious or mythical explanation, not an historical one. Historians insist on documented evidence for establishing past events, not the imaginings of religious chroniclers, no matter how inspired of Yahweh or some other god those scribes may have supposedly been.

Religion emerged when people first began to speculate about God and the creation of the universe and the relationship of human beings to both. History began centuries--or better yet, millennia, later. Unfortunately, religious writers have often given explanations that are purely religious or mythical and claimed that they were historical. Such claims have usually been perpetuated by subsequent leaders and followers of the various religions. Hence there are numerous religious explanations of how and why we are all here, and many of the explanations include mythological figures who are afforded historical status, when there is no genuinely historical (i. e. contemporary) evidence that those figures were real people.

This work takes a somewhat different approach to the world’s major religions. First, it is written in plain English and not the jargon often used by theologians and religious studies experts. It is specifically designed for the layperson. Second, it looks at the religions from a historian’s point of view. Third, it focuses on the founders of the religion and thus has a biographical flavor, introducing the reader to such fascinating figures as Zoroaster, Yajnavalkya, Mahavira, Confucius, the more familiar Christ and Muhammad, and others. Fourth, emphasis is given to the historical development of the various religions more so than to the nature of those religions. Fifth, the book demonstrates that viewing religions through the historian’s eyes and subjecting them to historical examination reveals that what is truly known about the religions and their founders ( as opposed to what various disciples and commentators claim is known) is very little. In spite of all that has been written about them, they can be summed up, historically speaking, in less than 200 pages!

David T. Morgan was born in Fayetteville, North Carolina, on January 5, 1937. He attended the public schools of Fayetteville, earned the BA degree at Baylor University, and the MA and Ph.D. degrees at the University of North Carolina at Chapel Hill. Married to Judith McIntosh, he has two grown children. He has taught at the following institutions: Patrick Henry College (Martinsville, Virginia), Texas A & M University, Rhode Island College, and Temple University Japan (Summer, 1989). In 1973 he joined the University of Montevallo as Professor of History and Chairman of Social Sciences. After fifteen years in administration he returned to the classroom full-time, and he is currently Professor of History, Emiritus, having retired from the University of Montevallo on August 1, 1997.

His publication include: four books (The New Crusades, the New Holy Land; Conflict in the Southern Baptist Convention, 1969-1991; The Devious Dr. Franklin, Colonial Agent; Benjamin Franklin’s Years in London; North Carolinians in the Continental Congress which was co-authored with William J. Schmidt of Westport, New York, and The John Gray Blount Papers, Volume IV, ed.), twenty-one articles in professional journals, and twelve biographical sketches in scholarly reference works. Other professional activities include the presentation of more than twenty papers at professional meetings. He has served as an evaluator on several occasions for the Alabama Humanities Foundation and as a reader and table leader of the Advanced Placement Test in American History for Educational Testing Service, Princeton, New Jersy (1975...present). Morgan is the national president of Phi Alpha Theta (the history honor society) during 1998 and 1999 and a former president of the Montevallo chapter of Phi Kappa Phi. He has traveled widely in the Britsh Isles, Europe, and Japan.