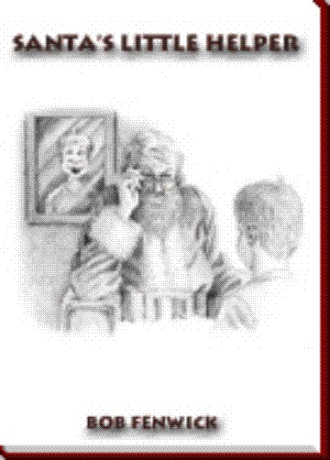 High on the wall, at the far end of the luncheonette, mostly ignored by the holiday diners, was a television set. The volume was set loud enough that occasionally, during a lull in the commotion below, you could hear phrases and words. But you didn't have to hear what was going on to understand what the show was all about. Three men and a woman, each one wearing a red Santa Claus cap with a small white ball at its tip, were arguing back and forth, gesturing at one another. One would say something and before he or she could finish one or more of the others would jump in pointing fingers, waving hands - the little white ball jerking around and around like a tethered playground ball. Back and forth, back and forth, for the better part of thirty minutes until the young man to the left of center turned to the television audience and with a forced smile wished all his viewers a Merry Christmas. His colleagues did the same, each one in turn adopting the same tight little smile of the host and as soon as they all had wished us a Merry Christmas they were right back at it as the credits rolled.

Merry Christmas! MERRY Christmas? I just don't know. It seemed the whole world was getting scratchier every year.

And it would have been cold comfort indeed to know that Santa himself was not in the best of moods. In fact, the North Pole was just about as scratchy as any other place on Earth. But then this was Christmas Eve and departure time was getting closer and closer. Santa had been slowly working himself toward the sleigh in the center of the North Pole compound but it was difficult progress with everybody on his staff coming up to him with last minute requisitions to sign off on, decisions that just couldn't wait, disputes to settle. All these distractions certainly didn't improve his disposition and he made no attempt to hide his displeasure, snapping at his elves as they scurried around him. He would be glad when the new guy showed up and took some of this detail work off his plate. With an experienced eye he surveyed the final preparations around the horseshoe shaped compound. On the outer limits were the living quarters and reindeer stables, usually brightly lit and spotless but now, with the drawdown of their energy to shift all available energy to the sleigh, looking dark and slightly dingy. Within this outer wall lay the administration buildings, the warehouses and training centers, and the mechanical buildings - all the normal support facilities that you would expect from an installation of this size. And then, in the middle of the compound was the heart and soul of the North Pole, the headquarters building with its connecting electronics command center just outside of which stood Santa's sleigh, the focus of all the activity. It sat facing due south looking out the open side of the horseshoe with its power feeder cables and tie downs being dismantled one by one, almost like a space rocket on the launch pad just before launching. He was heading in the direction, roughly, of the sleigh and the closer he got the more he felt the weight of his responsibility pressing in on him, the more papers were thrust in his face. Well, he might as well get this show on the road. He headed into the fray to find Sarge.

Far to Santa's rear at what would have been the back bend of the horseshoe shape a lone figure found himself just inside the shimmering dome wall that completely enveloped Santa's compound. Absentmindedly he rubbed his chest and looked down as if he expected to feel something. With a shrug he dropped his hand and raising his head scanned the compound with a cold hard stare as a predator might stare at its prey. He had no idea how he had gotten there or who had brought him or anything for that matter. He was just---- there. And about to be met by a small--.elf, a little fellow with not a hint of a whisker on his head.

Curly handed him a wide black belt about three quarters of an inch thick and helped Monger fasten it around his waist. When Curly had cinched it tight he appeared to strum his fingers across a control pad that was attached to the belt strap that crossed his chest and disappeared over his shoulder. Monger heard an odd, almost rhythmical, sound and his own belt blinked on. For a few seconds the odd rhythm persisted, then stopped and a second rhythm started. This happened several times until finally with the help of another strumming movement on Curly's part, the rhythm seemed to catch. Curly, whose brow had wrinkled just a bit at the apparent inability to maintain the tune, nodded satisfactorily. 'There, it took a few shots but I think you got it now. Usually doesn't take this long to get a fit.' Curly shrugged. 'Must be the drawdown.' Monger gave him a blank look to which Curly responded, 'This is your temporary LIFE belt. Everything here is energy and harmonics and frequency compatibility and so on and so on. You'll learn more about this soon enough, if you want to. But for now you've just been fitted with a life force accelerator. Santa wanted to get you up to speed as soon as possible. Scotty's working on your custom fit now and it will be ready before takeoff.'

Monger was listening with one ear because he could feel changes coming over him. He knew now where he was, the North Pole. He knew everyone's name in the compound although, obviously, he had yet to meet anyone except Curly. He knew he was going with Santa on his trip this Christmas.

It was as if his brain were being fed information at a terrific rate! And the belt felt so comfortable! He ran his hand over it. He could make a ton on this gizmo! This was going to be fun! Christmas was always the best time of year for him. It was when he made most of his money!

Curly beckoned to him and touched his elbow as if to guide him. Monger instinctively shrank from the touch. He didn't like people tugging and pulling at him. He went WHERE he wanted to go, WHEN he wanted to go there, but a strange feeling came over him as if part of him now wanted to acquiesce to others' wishes. He felt like he had to say something. 'I didn't bring anything with me, or if I did I can't seem to find it now.'

Curly smiled. 'No, most people don't bring anything with them. Let's go. Santa wants you to go directly to the sleigh. We haven't much time.'

Santa? Sleigh? This operation sounded like it was right up his alley! Monger was looking forward to meeting this Santa Claus. That's where the power was and he wanted to be as close to the top as he could get, even if he had to follow this little squirt to get there.

The first original Christmas e-novel on the net!

So you think you know all about Santa, his elves and his reindeer? Oh really! Perhaps a jolly fat man who grew from a European legend many years ago does not have that much in common with you, other than an interesting tale you recount to children once a year. Besides, you've got too much on your mind to bother: people hammering you, deadlines at home and at work, kids not listening to you.

OK. Since you're going to have to endure yet another seemingly interminable holiday season anyway, why not take a little time for a story about the real Santa Claus? You already know him - as well as all the other characters in this story. You see them everyday - in fact the odds are one of them is you! If reading about Santa Claus embarrasses you, no problema! Just download this late at night when you have some privacy. But leave yourself some flexibility and don't rush through it, because once you start reading you won't be able to stop. You'll remember your childhood Christmases, or your kids' Christmases and the memories will rekindle the realization that Christmas is truly the most wonderful and fantastic day of the year!

Bob Fenwick, trying to survive parentship of two teenaged boys and married to Victoria for 32 years, lives in Charlottesville, Virginia where he works renovating old houses. He has a BS in physics from Georgetown University, which is a great help when he's hanging drywall! Stumbling his way through fatherhood provided the characters and plot, if not the energy, for Santa's Little Helper.