by Bob A. McIlwain 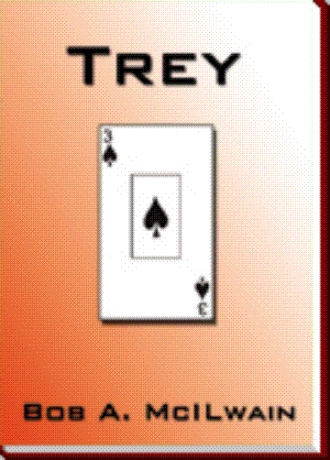 right arm and cartwheeling over his shoulder. This effectively turned the thug into a 6'3' flail whose feet clobbered the redhead and knocked him flat. While his man was in the air, Trey added to his momentum by jerking back and down on his arm, with a result much like cracking a whip.

The brunet hit flat on his back. As he started to raise his head, Trey stepped forward and cracked him over the right ear with the hardened edge of his left hand. The victim's head dropped back and bounced off the floor.

Trey was still moving forward and as the redhead woozily tried to get to his feet, Trey hit him with the same blow he had just used on the brunet, with a like result.

The blond had seem more than enough and throwing Dave aside, made a run for the door. Looking around for something to throw, Trey grabbed up a beer bottle and reared back and let fly, using his finger tips to give the missile a spiral. The thug was half-way to the door when the bottom end of the bottle hit him at the base of the skull. The impact knocked him over a table, where he collapsed into a heap and lay stili.

Trey looked down, shut his watch off and said, 'Twenty-four seconds, Dave. You owe me a fiver.'

The shaken Dave, nose dripping blood, muttered, 'Jesus Christ, I never saw anything like it.' Fishing a bill out of his wallet with a trembling hand, he handed it over. His right eye was starting to swell shut and his nose was leaking a steady

speaker was seated on the far side of the back seat.

As they neared the open door, Trey squeezed Suzie's arm and shoved her to his left as he dived to his right. As he had predicted, a hail of bullets stormed through the open door.

Trey hit, rolled, came up on his right side and stitched a line of five .40 calibers across the right front door, all directed at the shooter in the back seat.

Suzie rolled to her feet, ducked low and ran around behind the van to the left side, where she crouched and stitched a line of six rounds through the vehicle's skin, all angled up at the shooter's position. The firing from the back seat stopped, and the van lurched forward as the engine raced and the front tires smoked. Inertia slammed the door shut, but Trey had already rolled to the side. Jumping to his feet, he got off another five shots at the driver. Suzie opened up on the driver from the other side of the van.

Trey took a two-handed hold and squeezed off five more rounds at the back of the speeding van, all placed low on the driver's side of the back window. At the fifth round, the van veered to the right, jumped the curb and smashed into the corner of a concrete-walled warehouse, the engine grinding to a halt. The van sat for a moment. Then a tongue of orange flame licked up from under the hood and raced through to the rear of the van. Suddenly there was a loud, 'WHOOM!' and the van exploded

slightly louder voice, he said, 'This place sucks but it would be a perfect place for him to make his play.'

They were about halfway down the alley, Trey slightly in the lead, had just stepped into one of the overhead lit areas. Suddenly, a shadowy figure jumped out of a dark doorway on the right side of the alley, grabbed Suzie from the rear and jerked her backward, at the same time pulling her pistol out of its holster, dropping it on the pavement and kicking it aside. Tray caught the flash of movement out of the corner of his eye and whirled around, Glock in hand.

What he saw made his blood run cold. A tall black-clad, ski masked figure--from its size a male--was standing behind Suzie, clutching her tightly to his body. His left arm was around her chest and his right hand pointed a dagger at her throat.

'All right, Hampton, you sorry son of a bitch, you've been looking for me all over town and now you've finally found me,' the figure croaked in a high-pitched, obviously disguised voice, 'But things are not going quite like you'd planned.

'For I've got the arm on your favorite piece, and if you don't drop your weapon, I'll cut her fucking throat. In fact, I may do it anyway. Maybe I'll start by bleeding her a little, just for emphasis.'

Trey Hampton is a computer whiz who likes to live on the edge, meanwhile attracting violence like a magnet. In his day job, he heads up computer operations for a large Atlanta health insurance agency. At night, he helps his friend, Jim Coltrain, a homicide detective and ex-drunk, to solve difficult murder cases. At the moment, the hunt is on for a serial killer who is garroting prostitutes and leaving their naked bodies in dumpsters around town. While on the case, Trey meets and falls for the curvaceous Suzie O'Toole, a third generation cop. The plot follows the twist and turn of the chase, which culminates in a surprise ending.

B. A. McIlwain has been a: refinery pipefitter, display artwork, newspaper ad salesman, professional soldier, logistic advisor to a foreign government and transport economist in a large consulting engineer firm. He has worked in 26 of the U.S. states and 32 foreign countries, acquiring varying levels of proficiency in French, German, Japanese and Malay. A prolific technical writer, Trey is his fourth novel of fiction. He is now living and writing in South Carolina.