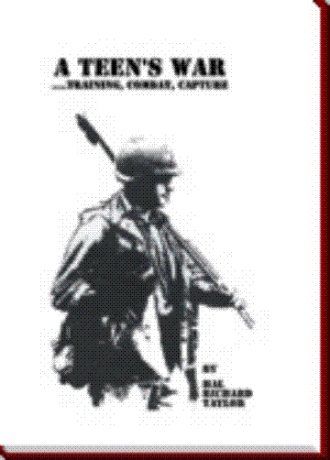 There it was. Bleialf;. Little had changed since 1944. At least, the church courtyard seemed the same. I began to choke up.

Finally I told her this was where the Germans took our shoes, boots, and galoshes after we'd been captured. . .where they shot three guys because they stripped the gears on a heavy truck when the Krauts told them to drive it. . .where an enemy soldier walked off with my barracks bag over his shoulder. . .where we began our march to the rail head at Gerolstein;, 85 kilometers away-a walk many of us made in our sock feet, despite the freezing cold.

Right around the corner stood the dormitory. Once it had been the quarters for a girls' school. The Nazis had brought girls there, so we were told, to entertain the German troops. . .the soldiers who built and occupied the Siegfried Line; before World War II began. I didn't know if the story was true or not, but it sounded plausible.

All I knew now was that the building had been my quarters in December 1944. I remembered that the building had extremely thick walls. Even the inside walls were massive. The place was a regular fortress, and we felt safe inside, grateful that we weren't having to stay in muddy, cold holes the way some men in our regiment were doing.

Members of our Antitank Company lived in the adjoining building. I belonged to the 2nd platoon of Cannon Company. Together with the antitank group, we operated as infantry with a regular riþe platoon and an Intelligence and Reconnaissance platoon. Together we made up a so-called provisional battalion; and occupied this thin strip of Germany, just across the Belgian border where infantrymen were scarce.

Now both buildings remained. A garden shed stood in front of the place I once called home. I could see a wheelbarrow and a shovel or rake leaning against one wall.

Of course back in 1944, the shed had been a pillbox. I remembered spending a hellish night in it once, even though the brass who sent us there called our sector a 'quiet area.'

Now, in 1982, my wife and I had come to Bleialf; from the east, using just about the same route the 18th Volksgrenadier Division; used on December 16, 1944. We came as the result of a spur of the moment decision. The Germans came in 1944 after several months of planning.

A Teen's War describes the experiences of a small town boy in the latter stages of World War II. Portions originated from letters written home about induction, training, and time overseas with the 423rd Regiment of the 106th Infantry Division and that unit's short period of combat in the Battle of the Bulge.

Details of capture and escape came from items the author wrote in prison or shortly after returning home in 1945. The material also includes comments of home folks as they reacted to missing reports.

The story is unique compared to most war books, for it contains none of the pedantic pretenses of most military histories, filled with strategy or the so-called 'Big Picture.' Instead, A Teen's War tells how a young, private soldier became aware of reality and the world around him despite his limited view.

All readers who have ever heard the words, 'missing in action,' will find this book interesting. Readers who were prisoners of war themselves, particularly of the Germans, will recall those hellish times and understand that recollection enables one to live and to cope with the realities of today.

Hal Taylor retired as Director of Public Affairs from the U.S. Department of Agriculture in 1980 after a career that included work at four universities and for a special project in communication. Then he became an international consultant and secretary-treasurer of the professional society, Agricultural Communicators in Education (ACE).

In 1988, he and his wife moved from the Washington, D.C. area to Mesa County, Colorado, where relatives had once lived. He soon published a family history, Remembering...Some Taylor-Farwell Connections. He has authored several articles on communication and has written a number of chapters for books on agriculture.