by Beverlee A. Constable 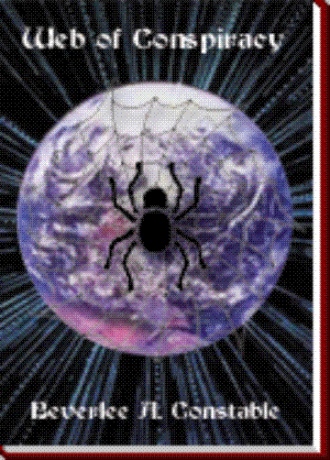 'No. As we discussed when I last updated you, I don't think she was suspicious or even remotely interested in any of the things she pulled off the Internet. But we're watching her very closely to make sure it stays that way. Between the neighbor's kid and his buddies and the Stanford Professor on the project she's gotten more information. It doesn't appear to have piqued her interest, but you never know.

'With the project on hold until some time in January, it's been quiet. No one's doing anything with the system. Her boyfriend showed up and they've been preoccupied with each other. Some other guy -- a friend of theirs -- dropped by for a day on his way somewhere, but he's gone. Friends from California are flying in after Christmas and the four of them are going skiing, so I'm hoping this will be the end of it.'

'I hope so too Michael. I don't relish this part of the business, but there are times, such as this, when we have no other alternative. However, we have to put this aside for a moment and decide what we're going to tell my dear friend the FBI Director. As you requested, I've put him off until you briefed me.

'I'm sure he's in a royal lather by now, what with being put off, the Falcon System alarms and this NTIS thing. He and his entire bungling, bureaucratic organization will be frothing at the mouth due to perceived injustices and lack of respect our team will have purportedly inflicted. I spend far too much of my time dealing with him on everyday matters, never mind the MAGIC activities.

'The man is absolutely tiresome; he is incapable of grasping anything of strategic import, yet he feels compelled to try to force me to justify everything I do. If he learns the scope of our surveillance activities all hell's going to break loose. He'll go to the President whining that I've usurped his authority, never mind that none of them could find their asses with a map, let alone successfully execute something this sensitive. I don't want him to know that we have Dr. Carmody under physical and electronic surveillance. I can explain that later, if I have to, as being under my jurisdiction due to MAGIC breaches.

'The Falcon System alarms can be explained in the same manner as you explained them to me; a fluke. The NTIS events require a little more creativity. Perhaps we should stick with Jack's delightful improvisation about their possible terrorist links. If we accidentally learned of said activities from one of our informants, it would have been most routine and prudent to attempt to verify its' accuracy through surveillance.

'However, their deaths are another matter. I suppose we could try to bluff our way out, insist that it really was an accident and an unfortunate coincidence. Yes, I think that will be our story, and it will keep that idiot out of our business. Let's get on with it then. And you must speak with Jack to insure he's on board. Have I overlooked anything or do you have any questions?'

Mike didn't particularly like the idea of lying to the FBI Director or asking one of his men to lie, but it wasn't the first time he'd had to do it and it wouldn't be the last. He knew better than to question the Old Man's decisions or to give him reason to question his loyalty. Carefully keeping his face devoid of emotion, Mike responded that he had no questions and excused himself in order to arrange the meeting.

Kate Carmody decides to leave the California fast track and moves to remote and beautiful northwestern Montana. Working as a part-time computer consultant, she takes on a project that will create a database of the Dead Sea Scrolls and other artifacts. She interacts with peers scattered around the world, including those at the host site, a government installation.

The project begins smoothly enough, but soon, strange and inexplicable events start to occur. First, there's the information about Majestic-12 and UFOs that Kate stumbles upon while searching web sites on the Internet. Next, Kate and several of her cohorts begin to suspect that their phones and computers are being monitored and that they are being watched. From then on, nothing is as it appears and Kate is running for her life. Her home is burned to the ground, friends' offices are destroyed, and coworkers are dying.

Uniting with several close friends in California, Kate wages a high-tech battle for survival. In attempting to identify those behind their surveillance, they set up on on-line trap. The nail-biting, cat and mouse game that ensues convinces her that her opponent is most likely a government intelligence agency.

As the death toll mounts and destruction continues, Kate unravels a conspiracy of such astonishing magnitude it will bring down governments if ever revealed. Played out against a background of suspected UFO cover-ups, misuse of power, and 'Black Ops,' the tension mounts as Kate fights back.

The author holds advanced degrees in Computer Technology from Stanford University and has held senior positions with IBM, Logica, Honeywell and Air Touch/Vodafone. She also held a TOP SECRET - ESI/SIOP government clearance and worked on several highly classified projects. Dr. Constable has worked and traveled extensively throughout the world, and has been a guest speaker at numerous professional events. As founder and president of a successful consulting firm, she and her husband spend most of their time in Montana, Florida, and England. She is currently working on the next Kate Carmody novel.