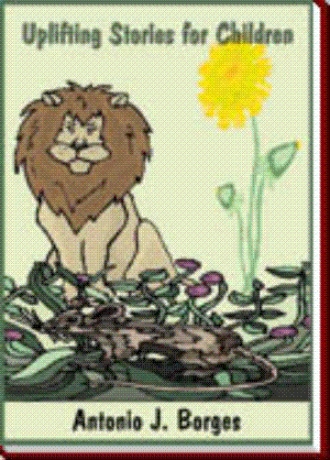 On one beautiful tropical day in the jungles of Africa, a mouse named Chew Chung looked out to the horizion to see the bright sun. To the east was a hill covered with bright colored dandelions.

Chew Chung said to his darling Singling.
'My love, to express my forever love to you, I will journey up those hills into the high valley's of dandelions. Taking on whatever challenges that may lie ahead of me to bring you those wildflowers that shine with light like sunflowers even on a cloudy day.'

That same day Chew Chung set off towards the hill.
'Who enter's my kingdom?' A lion say's with a roar!'
'It is I Chew Chung the mouse. I have traveled from the mighty tundras down below the mountain here so that I may bring my sweetheart some of these beautiful yellow dandelions.'

'AH!' But the lion said. 'I will give you not only a dozen dandelions but also a bag of seeds so that you may plant for her! In return you must bring me some tigerlillies for my sweetheart.'

'But where do I find these tigerlillies you talk about?'

'There, down across this hill, you will come across a dangerous river. No matter how big and powerful I am, it has stopped me in my many attempts to reach the other side of the banks to bring the beautiful flowers to my sweet.'

Chew Chung thought about it and said, 'Well, I have traveled too far to go back empty handed. I shall do it then.' Chew Chung made his way to the river. 'Oh my!' Chew Chung said. 'That does look dangerous.' Chew Chung immediately put together a raft made from twigs and weaved them together with grass blades. He began going down stream as the water grew more rapid and became very rocky.

The raft then crashed into a boulder of rocks sending Chew Chung into the mighty river. He tried to keep his head afloat. He found a branch bending out towards him and with all his might he stretched out to grab for it.

'Jessica' is the story of a poor widow and her bedridden seven-year-old daughter, who learn miracles come true in the hands of God.

I hope you will enjoy reading both stories, 'Chew Chung the Mouse' and the 'Christmas Crickets.' 'Chew Chung the Mouse' was written to help children face any obstacles that may come their way in life. May it be sports or math and English, if they stick to it they will succeed. And the story can teach little boys that if they admire a little girl, they shouldn't throw pebbles and rocks, they should throw flowers.

The 'Christmas Crickets' was written to teach children to be compassionate to those who are less fortunate in the world, to treat them with love and kindness and to maybe give a poor child a toy that they may not have any use for anymore in this special time of giving.

For Tony Borges, it began with flowers. As a child, he would toil in the soil around his Pawtucket home, gently coaxing buds to bloom. It was an interest he inherited from his mother.

His mother followed her own philosophy. She nurtured Tony, encouraging him to develop his talents. She died in 1981, while Tony was a sophomore in high school, but her guidance has left a lasting effect on her son.

Yet, Tony has also pursued his other interests. These include recording an album, studying anatomy and physiology, and writing children's books, short stories and a science fiction novel.

'My mother saw that I had writing potential. She said it was a gift from God,' Tony said. He remembered that they would watch The Waltons together and he would tell her that he wanted to be a writer, like the 'John-boy' character.

After high school, Tony earned a degree in radio and television broadcasting from the Sawyer School. Tony said that it was there that he was first trained to write, drafting stories and scripts. He put his writing aside for a while and pursued other interests. These included taking anatomy courses at several colleges, running the sound and lighting boards at nightclubs for a local band, and recording his own album, Wolf, which was released in 1991 on an independent label.

Tony began writing again about a year and a half ago, with the encouragement of his brother-in-law. He sets aside at least one hour every day to work on his writing, sometimes waking in the middle of the night to write.

'If you put aside an hour a day, before you know it, you have a book,' he explained.

This diligence is at the heart of his children's book, The Adventures of Chew Chung the Mouse,. It is the story of a mouse who must overcome many obstacles on his quest to pick some dandelions for his love.

'My daughter inspired me to write children's books,' he said. 'I never thought of it until she came into my life.'

His science fiction novel, Annihilation of a Planet, deals with the problems of being human in an increasingly automated society. 'It is meant,' Tony said, 'to let people know that we have to care for our planet and for each other.'

This nurturing philosophy, first learned from his mother, runs through much of Tony's work. What is the moral of The Adventures of Chew Chung the Mouse? 'It is meant to teach little boys that if they admire a little girl they shouldn't throw pebbles and rocks,' he said with a grin, 'They should throw flowers.'

Tony is a graduate of Harvard Medical School Department of Ophthalmology Massachusetts Eye & Eye Infirmary. He is employed by Koch Eye Associates as an eye surgeon technician.