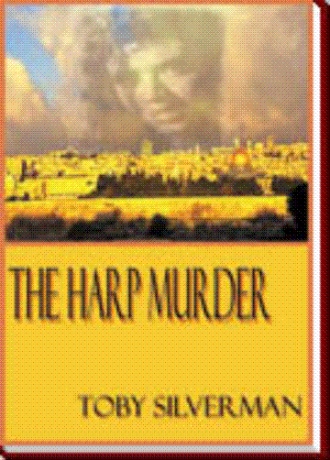 'Honey, honey.' Rachel reached up to try and take hold of his hand. He brushed it aside violently and plunged the still wrapped letter opener deep into her chest.

One blood filled sigh emerged from her mouth and she crumpled to the ground.

The purple bag had fallen next to her. Sheldon stood stock still for a moment. He appeared momentarily surprised. Why was she lying on the ground bleeding? He looked around. The alley was empty. He took a deep breath, leaned down and grabbed the blood-soaked paper. The letter opener was slippery in his hand but he managed to pull it out. He looked around again, this time searching the ground. Yes. Those Israelis are wonderful, he thought. Throwing trash where they like. He reached for the grease stained McDavid's bag and dropped the bloody paper encasing the opener into it. He placed it gently on the ground and peered down the alley. Still empty. He opened the purple bag fully and placed it next to Rachel. Kneeling down, he began to roll her into the opening. It was a good fit he thought, pushing her legs into a semi-fetal position. Wiping his hands on her skirt, he closed the bag. Retrieving the McDavid's bag with his left hand, he grabbed the chain handles and began dragging the large purple bag down the cobblestoned lane back toward Botta House. Passing it, he continued down to the foot of the road where the new condominium parking lot stood empty. He dragged the bag to the low wall and raised it til it was leaning against the wall. He lifted it again. Boy, she really has put on weight, he thought, as he heaved the bag up. One more lift and he rolled it over the wall. He heard it hit some of the construction debris below the wall. Holding the McDavid's bag, he broke into a jog.

'The Harp Murder' is a sequel to 'Murder in Bed Pan Alley'. It picks up with Tanya's life a year after she has recovered from a deadly infection, the result of her ex-husband's attempt to murder her. The setting is Israel, where Tanya is leading a group includes: Jason, a surgeon, who was particularly responsible for Tanya's infection, Natalie, his wife, Bob, Tanya's fiancee, the infectious disease specialist who saved her life, and several other physicians. Tanya's ex-husband, Rabbi Sheldon Goldberg is now living in Israel with Rachel, his second wife, but is havong an affair with Lila, a young rabbinical student. Arthur, Tanya and Sheldon's son, is also a rabbinical student in Jerusalem.

In a fit of rage, Sheldon murders his wife. He stuffs the body into a harp bag which Athur had given to him. The harp bag belongs to Tanya. Rachel's body is discovered by Jason on an early morning jog around Jerusalem. The police are called in. The Rabbi tries to implicate tanya, and Makhrim, a young Arab friend of Arthur's, in the murder. Bob, Tanya's fiancee becomes increasingly agitated by the Rabbi's conduct and arranges a secret meeting with him, with tragic results. Will the police figure out that the Rabbi is a cold blooded killer? Will justice be served? Or will the Rabbi ramain free, to kill again--.

Toby Silverman, Ph.D. is a psychology professor at William Paterson University in New Jersey. Both of her children, Avi and Tamar are screenwriters, and inspired their mother to write something that was not academic. This is her second novel.