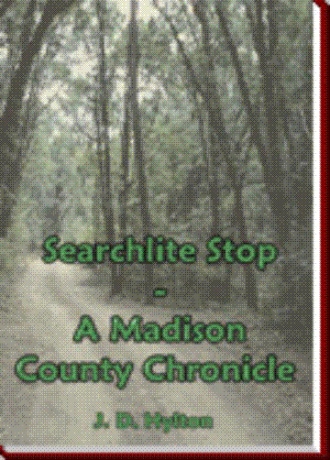 It was a typical late summer Iowa day, dry from the lack of rain. As the brand new 1951 Hudson sped through the countryside along the empty road, the wheels kicked up gravel and small clouds of dust. It wasn't unusual in this part of southern Iowa to come across an occasional cow standing by the road, searching for sweeter grass. So there wasn't any reason for alarm when I saw a big black bull in the roadside ditch ahead of us, escaped from its pasture fence. Twyla placed her hand on my knee as we approached the large black critter. But the closer we got the more I noticed that something seemed to be wrong. The bull was not grazing in the long grass in the ditch. His head was low, but he appeared to be dancing around, snorting and swinging his thick neck. Just then, he dashed out of the ditch toward the road with a skunk practically under his hooves.

I don't know how fast we were moving, but it was too fast for me to do much. I hit the brakes as the right front fender caught the bull in its forequarters and flipped him over. I don't think he had time to know he'd been hit. The impact whipped the car in a circle on the loose gravel road, and when the car finally skidded broadside to a stop, we were perpendicular to the road, about twenty yards beyond the bull.

We sat perfectly still for a moment before I heard my voice ask Twyla, 'Are you OK?'

She only nodded. Slowly I eased the car into gear and straightened out the wheels. I backed the car along the road until I could see the bull. He lay motionless in the hot gravel. I stepped out of the car and walked over to the animal. The sunlight glinted off his neck as I stood staring down at the beast and at the bright brass registration tag that was attached to the chain around his neck. In the heat of the afternoon, I felt a chill as I realized that this was not just any old cow, but a top-of-the-line registered Angus breeder bull.

Twyla began to scream, 'Come on, damn you. COME ON!'

When I got back to the car, three things were clear. I was scared, Twyla was both scared and pissed off, and we had also hit the skunk. For some odd reason, I found I was staring at the rhinestones sparkling on her black velvet choker as the veins in her neck bulged and her face got red.

'Get me out of here, damn you!' she screamed. 'I can't stand that stinking smell. I didn't think nothing could smell that bad.'

I got behind the wheel and began to drive away from the scene. The farther and faster I drove, the more the odor seemed to plague us.

Twyla coughed and choked. 'That thing is caught on the car. It has to be, we've come too far,' she said. 'Hurry up and do something, I'm getting sick. I'm gonna to throw up any second.'

I steered the car carefully to the side of the road, jumped out and ran to the front. I dropped to my hands and knees to inspect the extent of the damage. The shiny new grill was smashed and beneath all that wonderful steel and chrome, I could see the remains of the skunk caught up in the undercarriage. I found a stick by the roadside and tried to dislodge the twisted black and white creature, but that only made the odor worse.

I heard Twyla's door open and slam shut. Then I heard her moan as she braced herself against the fender, doubled over with cramps, and began to vomit. When she recovered enough to stand up, she began to cry and swear. The more she cussed, the madder she got.

'The hell, you say! You gotta be crazier than I thought. There ain't no way I'm gonna get back in that car.'

'You can't walk home from here. It must be five miles.' 'Just you watch me, you dumb bastard! I'd walk to China before I'd ride one inch in that thing with you.'

All in one motion, Twyla turned, wiped her mouth and chin with a small lacy handkerchief she snatched from the breast pocket of her yellow satin blouse, and struck off toward home. With the second step she took, she threw the handkerchief to the ground and mumbled something I could not hear. Her deep green skirt swayed above her ankles like spring wheat on a windy day. I watched her and her rapidly departing fat butt. In fact, there wasn't much about her that wasn't fat.

'Thanks a lot!' I shouted. 'If it wasn't for you, I wouldn't have driven all the way down here from Winterset in the first place.' She ignored me and continued her brisk pace along the road.

Alone in the car, I turned on the radio, hoping that the sound would distract me from the smell. The skunk carcass rode next to the hot engine all the way back to Winterset. Sometimes the smell got so bad that tears filled my eyes and the edges of the road began to blur.

SEARCHLITE STOP resolves enigmatic issues. For example, why do cows wear necklaces? What's the best defense against an attacking casket? What future does life hold if you can't be a midget? How can an Iowa town of 200 souls dispose of its dead whale? How can a croquet set and a suit of long winter underwear aid the attempt of three small children to bombard Madison County's courthouse with a Civil War cannon? And, why wait three days to invite a burglar to breakfast?

The answers evolve as this story unfolds: After fleeing the scene of a hit-and-run accident he caused, the 18-year-old protagonist lies about his involvement, fails to accept the responsibility, and seeks to escape the consequences. His dilemma is accentuated by a host of offbeat characters whose sidebar stories dispel the widespread myth that life in a small Iowa town is quietly pastoral and idyllic. These strikingly different supporting characters highlight scenes that range from boisterous to bizarre.

The story chronicles 36 hours in the fall of 1951 and is set in Madison County, Iowa. Although it is the same locale Robert James Waller picked for The Bridges of Madison County and lies near Jane Smiley's A Thousand Acres, the people and action in Searchlite Stop create an extraordinary counterpoint to those books.

In Searchlite Stop, a story that spans 36 hours in the fall of 1951, J. D. Hylton writes of his hometown in Madison County, Iowa. Although placed in the locale that Robert Waller picked for The Bridges of Madison County, and near the setting of Jane Smiley's A Thousand Acres, Searchlite Stop is extraordinarily different. Hylton's view is credible; his family has been a part of that community for more than 140 years. His credentials include four decades as an internationally published technical writer, editor, and documentation specialist in telecommunications, engineering, and consulting firms. His work has been published in the United States, Japan, Germany, Canada, and Austria. He is a graduate of Iowa State University and received a Bachelor of Science degree in technical journalism.