Blossoms of the Spirit 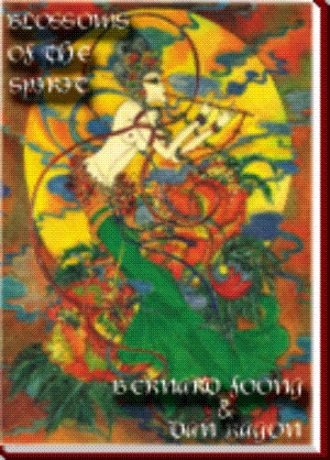 The two young men were an interesting contrast. One was a son of China, returning home after attending the University in England, the other an American visiting China for the first time, traveling to the diplomatic post he had been assigned. Of similar ages, they had found much to discuss since meeting on the airplane, but now the first time visitor watched the countryside in awe as the small river steamer plowed through the sun dappled waters of the Yellow River.

'This is an astonishingly beautiful land,' he said.

'It is indeed, but even peaceful waters may conceal turbulent undercurrents.'

The American smiled and nodded. 'I'm sure that each village is a fountain of knowledge and wonderful stories of times past. Like over there,' he said pointing to the shore. 'There's a small village with the ruins of a castle nearby. I bet those walls could tell a thousand tales if they could talk.'

'Weeping Willow Village is a place of great legend, like the bright flowers that you see around it.'

The American turned to his companion. 'Great legend? Do you know this legend?'

'Yes, I do. Perhaps I could share it with you?'

The long summer days were once peaceful and filled with joy for the people who lived along the Yellow River. They loved to watch the graceful weeping willows dance in the gentle breezes and to listen to the cooing of the lovebirds while they basked in the warmth of the sun.

Those idyllic summers became a fading memory with the arrival of Minister Fan Fei. He and his minions plundered the land, taking whatever they chose, impoverishing the very subjects they had sworn to govern and protect. The people despaired of ever again knowing the peace and harmony of the past. A heavy shadow lay across Weeping Willow Village where the people were crushed beneath the government of Minister Fan Fei.

Along the edge of the river, near the weeping willow trees stood the simple peasant cottage of the woodcutter Ka Lung. They lived alone for many years, but late in their lives, Ka Lung and his wife were blessed with a daughter, whom they named Hoi Fung (Sea Breeze). When she was still small, Hoi Fung's mother was taken by illness, leaving Ka Lung to raise their child alone. Hoi Fung was an obedient child and a source of great pride for her father.

In the evenings they would sit near the fire while he shared the lessons of life with her. 'Each person is blessed with a sense of honor,' Ka Lung taught her. 'Only by living in honor do we serve our God and ourselves.'

'But what then of those who take from others to satisfy their own purposes-even though the taking brings sadness and hardship? Are they also blessed with a sense of honor?'

'Even good men can learn bad ways. Power is the mightiest intoxicant of all. Those who drink of it are often lost in its heady spell. But the greatest power is not that wielded for personal gratification, but that which is used for the benefit of others.'

'Then the greatest power is that which serves the needs of others?'

'Yes, and the greatest wealth as well.'

'But father, what wealth can be gained by helping the poor? They have no money with which to pay.'

Ka Lung smiled benignly. 'Daughter, you are confusing wealth with money. Money is only a tool for mortal man. Wealth of the spirit sustains your immortal soul.'

Hoi Fung watched the flickering fingers of the fire as she paused to think. 'I understand what you say, but will it fill our empty purse or restore the fields after Minister Fan Fei has stolen the crops and taken our small savings in taxes? Will it feed us in the winter when snow blankets the land and our cupboard is bare?'

'Do not permit yourself to fall into the trap which has snared Minister Fan Fei. His table and his purse may be full, but his heart is empty.'

Hoi Fung paused to think for a moment. 'And if the heart is empty, then no amount of money or possessions can fill it.'

Ka Lung smiled proudly. 'Now you have grasped the true meaning of wealth.'

Many cultures of the ancient world have passed into memory leaving only the skeletal remains of the people and the fading words written on crumbling walls in a language lost to the sands of time. Uniquely, China has weathered the ravages of time and political upheaval without losing its identity or its language. China is a land of many contrasts and climates, but the people of this land are a hardy band who treasure their heritage and the forebears who have handed it down through the centuries of conflict and change. Passed down through the centuries are stories of great families, great battles, and great heroes; tales of good and evil; stories of love; stories of the grace and the strength of the human spirit.

The fables gathered here entwine the myths and legends of the people of the ancient land and the beauty of the flowers that bloom with the changing seasons. If there is a common thread that runs through these tales, it is that the battle between good and evil is neither new, nor has it yet been won. The contest continues, and perhaps, for each reader, a new well of resolve and determination will be discovered somewhere among the blossoms that color the landscape of the soul.

Bernard Foong is well internationally recognized as an innovative designer of wedding gowns and as an artist. Born in Malaysia of Chinese and English parents, he was educated in England and Europe and has designed clothing for many of the most famous shopping venues in Europe and the United States.

Dan Ragon is a native of California who has turned his hand to a wide variety of tasks, garnering a wealth of experiences along the way. He is known as a writer, computer technician, philosopher, consultant, and poet.