Patches on my Britches 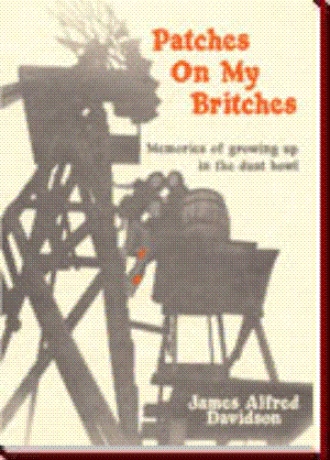 The four towheaded boys standing around the pot were dressed exactly alike in blue denim bib overalls. They were barefooted and bareheaded and bare everything else except their britches. Alfred's overalls had been handed down from Eldon, to Cecil, to Joe, and then on down to Alfred. As usual, they had patches on the knees -- a red one on the right and a green one on the left. Unfortunately for Alfred, Mawy chose a piece of cloth for making patches by its size, not by its color.

Their ancestry gave them naturally fair skin, but the sun had been working overtime on that too. Every inch of exposed skin on all four boys was now a rich dark brown color.

The three oldest kids took turns stirring the pot. Eldon first, then Cecil, then Joe. When Joe's arms got tired, he handed the stirring stick back to Eldon. They hadn't even thought of letting their little brother Alfred take a turn. He was five years old and had always just watched as his big brothers did the stirring. But this time he wanted to help. He was barely tall enough to see over the rim of the pot, but he had been watching how the big boys did it. He was pretty sure that he was big enough to try.

"I wanna do it," he said, reaching for the stick.

The three older brothers looked at one another and then down at him and grinned knowingly. He was too little. They always thought he was too little to do anything.

"I'll show 'em," thought Alfred to himself. He looked up at Eldon, appealing for some support and asked, "Cain't I try? Jist once?"

Eldon was ten and was the biggest and the wisest. He would decide.

The stick was passed down to Alfred. The others all chimed in at once and told him, "Don't stir too fast." And, "Don't splash boilin' water all over ever'body."

It wasn't easy. Alfred was so short that he had to get his bare feet almost in the hot coals to get close enough, but he did stir a little around the edge of the pot. Six older, wiser eyes watched him struggle and waited for him to give up.

Joe, experienced and, of course, wise, told him, "You haf to stir the whole pot, not jist one little ole side."

Alfred moved around to the other side, being careful not to step in the fire, and stirred some on that side too. Cecil, light years wiser and older than Joe, pointed out, not too kindly, "You haf to stir the clothes in the middle of the pot too." Then Cecil added, not kindly at all, "You little peewee. You cain't even reach the middle, much less stir it."

They all could see that he was going to have to give the stick back, and then they could make fun of him again.

But the big boys were about to see a little more spunk than Alfred was supposed to have. He pulled the galvanized washtub up next to the black pot, turned it upside down, and climbed up on it. He was standing as tall as Eldon now and didn't have any trouble reaching the middle of the black pot. The steam was making his face red and was almost burning his arms, but he was stirring the middle with all his might.

This story eases you back through childhood where you will experience the delights, difficulties, and wonders of growing up. It is a true story that paints a vivid picture of the tenacity of a family of West Texas Panhandle pioneers. You will enjoy the gentle humor and the way of life that the parents, Mawy and Pawy, and their thirteen children achieved, even in the middle of the depression and the dust bowl days of the 1930's. They endured and came through the hard times stronger than ever.

Young readers will enjoy being with Alfred, the author, as he gets lost in a sandstorm, makes his own toys, and has boyhood adventures by the barrelful. Adults will find themselves slipping into a mellow mood as childhood memories come wandering back. It is a captivating story that is hard to lay down.

James Alfred Davidson grew up in a small sheltered community in the Texas Panhandle. After high school he joined the Army Air Corps and soon found himself in places he had heard about in geography class. He traveled from the East Coast to the West Coast and lived in eight of the states in between.

After college in Michigan, he moved his family on to Cuba, Argentina, and Canada and continued to fly throughout the Americas. Now retired, he still flies with his wife and the other "snow birds" in their migration between Tucson, Arizona and Crystal Lake, Michigan.