A Taste of Cold Steel 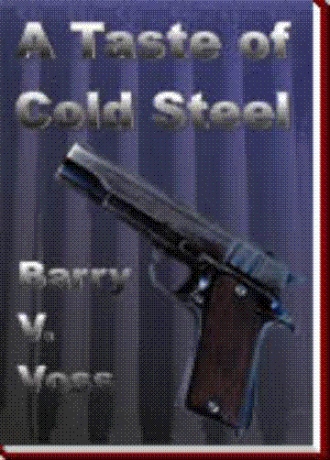 Johnny laid on his bunk, depressed about his recent court appearance. The conversation with his court-appointed mouthpiece didn't help. He couldn't bail out and couldn't hire an attorney. And now he had to believe in a lawyer who didn't know him and who didn't have the time or resources to defend him. Kincaid seemed to have heart, and sometimes that was enough. He felt as though he had been ripped apart. Half of him was at home with his mother; the other half was entombed in a jail cell. If he could turn back the hands of time. . . . He never would have went to the parking ramp. Instead, he would have went home to be with Christine. As he laid in his jail cell, he was overcome with the insatiable desire for White Castle hamburgers. He could taste the burger with bits of sweet onion. Those burgers had to be the best piece of meat between two buns he had ever put in his mouth, except for his girlfriend, Jackie. But right now, he wanted that burger more than he wanted Jackie.

His daydreaming was interrupted by the convict lawyer. 'It wasn't a good day for ya in court, was it?'

'Defendants have very few good days in court. More often than not it sends them into a deep-blue funk, if ya know what I mean.'

'I know.' Johnny stared at the ceiling as a jailer appeared at the cell door, slapping his cell key against the bars.

'Gibson, c'mon outta there. You got a visit. And Stone, grab your shit and step out. Transport's here for ya.'

Johnny and Stone stood looking at each other for a moment. Stone broke the silence. 'Don't worry, kid, you'll beat this case an' be back on the streets in no time.' His words rang hollow. Johnny didn't particularly like Stone, but he had been good company. He now wondered who would become his next celly.

'Maybe, maybe not,' Johnny said philosophically. He shuffled off behind the jailer, excited about a visit if for no other reason than to get out of his cell. They walked toward the interview room, turned the corner and then went to the right, not to the left. 'Where we goin'?'

'Not in the interview room?'

'Naw, this is a non-contact visit. So it must be family.'

'Johnny knew it had to be his mother, and he didn't want to see her like this. The jailer ushered him into a cubicle the size of a telephone booth with a glass wall separating him from his visitor. There were telephone receivers hanging on each side of the wall. Johnny saw Christine standing in the cubicle waiting for him with the receiver in her hand. Immediately, he picked up the receiver with one hand, and placed his outstretched palm against the glass. Her eyes were brimming with tears. She raised a gnarled hand, placing it against the glass partition in a futile effort to make contact with her son.

'What have you done, Johnny? What have you done?' The words gushed out in a torrent of shame and anger. She caught herself. 'I told myself I wasn't gonna come here and scold ya. But I can't help it. I'm not able to help ya now. You gotta do this on your own.'

With his hand pressed against the window, his shoulders hunched over, chest heaving and tears streaming down his cheeks, Johnny cried out to his mother. 'I'm scared. I don't know what's gonna happen.'

All Christine could give Johnny was advice. 'Johnny, when you think everyone has deserted you; when you feel you're all alone, remember, believe in yourself. Never lose faith in yourself. Everything will work out.' Johnny stood motionless, hand pressed against the window, looking into his mother's eyes.

The conversation was interrupted by a voice telling them the visit was over. Neither Johnny nor Christine realized how quickly fifteen minutes went by. He replaced the telephone receiver in its cradle and mouthed the words 'I love you.' She stood still, telephone in her hand, looking deep into Johnny's eyes. He felt numb as he returned to his jail cell. The visit, the cubicle, the telephone. So artificial; it strained his relationship with Christine. He couldn't go through this again, but he needed the strength in her voice.

When Tommy Biscaine, loan shark for the Pavalon crime family, is viciously murdered, the formula for a powerful new drug vanishes. It is the secret formula for Crystal Blue, a drug designed to ease the suffering of terminally ill patients. In reality, Crystal Blue will tighten the Pavalon family's death grip over the hollow lives of addicts. When Biscaine is killed with an ice pick to the skull, two worlds collide.

Johnny Gibson, whose life is squeezed through a junkie's needle, is wrongly charged and pressured to plead guilty to Biscaine's murder. Rico, a psychopathic killer longing for the moment in time when his victim will taste cold steel, chases Gibson through the justice system. Rico, however, doesn't respect the junkie's resolve, born inside a prison cell, to unravel a mystery buried deep in the bowels of the courthouse.

It is Johnny's newfound character, and Rico's steely determination to finish a contract, that propels them toward a lethal confrontation. But it is a courthouse revelation that causes Johnny to hesitate, maybe long enough for Rico to once again slip through the system.

Barry V. Voss was chemically dependent and doing time by a young age. At 19, he was a poly-drug user, addicted to morphine, and serving five years at the St. Cloud Reformatory for Men. It was the last stop in a long tour through Minnesota's juvenile and adult criminal justice systems.

He began college while in prison, enrolled in group therapy at Project Newgate, and was paroled to its campus facility at the University of Minnesota in 1973 where he obtained his bachelor's degree in political science. In 1978, he graduated from Hamline University School of Law. While attending law school, he was among the initial group of paralegals for the Minnesota Legal Advocacy Project to represent state inmates before prison disciplinary hearings.

Before establishing a law practice, Mr. Voss sought and obtained a Pardon Extraordinary from the Minnesota Board of Pardons in 1977. Since admission to the bar in 1978, Mr. Voss has successfully tried cases ranging from possession and distribution of narcotics to first-degree murder, as well as white collar crimes in both state and federal courts.