The Secret Diaries of the Ozarks 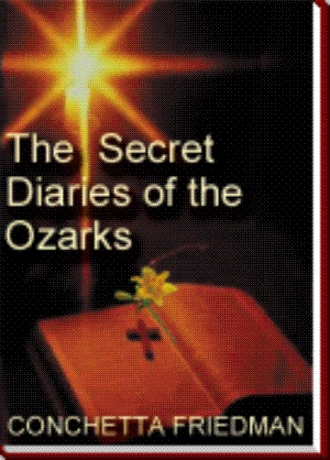 'Maybe in age, but my maturity level is way passed yours.'

With a spark of fire in his eyes, Judd responded, 'I'll show you maturity you little smart aleck!' and grabbed Falcon's arm and twisted it behind his back.

Falcon broke out of the wrestling hold that Judd had on him and grabbed him around the neck and attempted to pin Judd to the floor. Just then, Marylu stepped in and said, 'Hey! Knock it off before I skin you both.'

After Falcon and Judd decided that Marylu was serious they settled down. Falcon said to Judd, 'So, have you found yourself a little darling yet?'

'No, not yet, but I'm open for suggestions,' Judd said.

'Well, maybe I can fix you up with someone pretty darn soon. I met one of the Janark girls on the train coming home. She's prettier than a whippoorwill in springtime. Her name's Toby.' Falcon smiled with a dreamy look in his eye.

'Uh-oh,' Judd said, 'I guess Cupid's stuck you with one of his arrows.'

Falcon did nothing but smile and raise a mischievous eyebrow.

Then Judd looked around and said, 'Where's Grandpa?'

'He's around back, cleaning his fish. He can't hear too well anymore, and he's been sick. It may be cancer,' Falcon said.

Judd's mouth opened in dismay, but he left the questions for later as he slowly walked outside toward his grandfather and hugged him. 'I missed you, Gramp.'

'Judd? Are my eyes failing me now like my ears?' Grandpa said.

'Well, now that I've seen Falcon and you, I hope my heart can take all the excitement. Maybe I better double up on my medication,' Grandpa said, smiling.

Judd smiled back, knowing that a jug of moonshine was his medication. Then he made his way back inside the cabin.

'Listen, Judd,' Falcon said. 'Let's get together tonight and check around for a beginning in our search for what lurks in these hills.'

'Okay. I'll go home and see Ma and Pa, take a shower and shave, and we'll get started.' Judd paused, picking up his Stetson and jacket as he closed the door, saying, 'See you later.'

Youth prevailed as the two fellow's adrenaline flowed, giving them courage and inspiration to track down unknown killers, yet the lust for the love of a woman lingered in their minds.

Falcon eyed his grandfather's double barreled shotgun hanging over the fireplace knowing he'd need that as well as his thirty-eight caliber police revolver. He had plenty of ammunition, but he knew he'd need more federal agents to join him. That thought taunted him as he showered and changed clothes to go out with Judd.

Join FBI agent Falcon Mannor in his quest to discover why the Mafia has infiltrated and is terrorizing a small town in the Ozarks. Explore a haunted cabin, dig up graves, and follow body bags that tumble out of airplanes into the bottom of ravines. Search for Sam Morgan's lost gold and discover the secret diaries of the Ozarks.

Born February 19,1929 in New York. Author of Colossius The Giant, published songwriter, accomplished artist, plays guitar, still clogging on stage with the Deer Valley Cloggers in Arizona. They volunteer their dancing shows in Nursing homes around the valley. She lives with her retired husband and has five children, nine grandchildren and eleven great grand children.