A Passing of Innocence 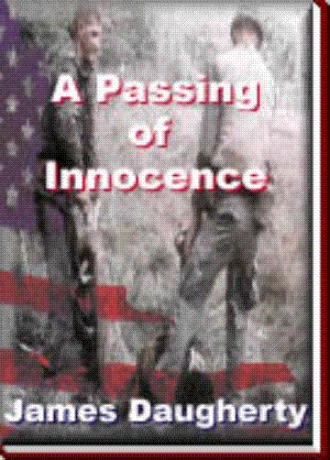 The environment was ideal. Dark, under a cloudy, moonless sky. Showers came and went, moderate enough to mask any noise the Marines might make. The squad ambush had been in place for over three hours, each team waiting silently. Everyone was tired, wet, bored, and frightened. Night ambushes were always hit or miss. The mission could be another night of miserable exhaustion or heart stopping combat. Their world could change -- or end -- at any moment.

Everything was set. Rally points had been established. The squad M60 machine gun was aimed straight down the dark trail in the expected direction of NVA movement. Ten meters off the long section of the L-shaped path, three Claymore teams waited quietly for any infiltration to their right. Each Marine was trained to limit his fire to a specific arc, similar to the Claymores. Their arcs interlocked and would cover the kill-zone with bullets and ball-bearings. Acting as a rear security element, Strange’s team had been dropped off seventy meters before the bend in the trail.

Sixty meters to the right of the main ambush site, Chip’s three-man team was set in, acting as an early warning element. His M79 was cradled in his arms, loaded with a flechette round containing 45 dart-like projectiles. As with the other team leaders, he held a 'Hellbox' in his left hand. The electrical firing device was connected to the Ml8Al Claymore antipersonnel mine: a rectangular cast-iron box containing 700 steel balls set in an explosive bed.

The Marines huddled together in the rainy darkness. Hour after hour they waited. The night became colder, wetter, blacker. They saw nothing, heard nothing. Chip waited, trying to be patient. He wasn’t too thrilled to be this far into enemy-held territory. Making matters worse was the fact that this was the first time, with combat imminent, he’d been separated from Kunze. Chip’s team waited in silence, unable to be seen or heard by anyone. They strained every nerve, trying to make their ears take the place of their eyes, waiting in deep concentration, listening, waiting, listening...

Feeling a light tap on his right shoulder, Chip turned to face Hearn. He nodded. The sign. NVA movement. Listening intently, his senses at their peak, Chip heard the faint sounds grow louder.. .then closer. His trigger finger dripped with sweat, as if he had dipped it in a glass of water. He nudged Foster, then flipped the safety off on his M79. The sounds of the enemy became more pronounced. Chip strained his ears and eyes to detect the footsteps of the approaching NVA.

With a ghostlike presence, an NVA scout, followed by a cover man, moved cautiously up the winding trail. Camouflaged with tree limbs and jade-green leaves, the two NVA soldiers were dressed in olive-drab fatigues and distinctive pith helmets. They stood less than ten meters from the Marines.

Chip felt the blood pound in his ears as his heart thumped. Rotten creeps, he thought to himself. His adrenaline surged; he fought off the urge to either flee or open up on the enemy. Don’t let your emotions take control. Gonna have to wait. Take it easy. Dinks have no idea we’re here. He was so close to the point NVA that the enemy suddenly became real -- human. No one had told the him this would be his last night on Earth, that he had only minutes to live.

The NVA soldier warily eyed the dense jungle, trying to detect any American presence. Turning his head to the left, he suddenly stopped, staring directly in the Marines’ direction.

Does he see us? Is he gonna open up on us? Chip’s heart seemed to skip a beat. He took up the slack on the trigger. At this range we can't miss. But neither can he. One more step, one more step, and you’ll be history.

Taking a step off the trail towards the Marines, constantly scanning the clumps of bamboo and jungle vines, the NVA scout stopped.

Chip’s finger tightened on the trigger. The NVA’s eyes darted back and forth, then upwards to the triple canopy foliage. Content the path was clear, he turned and walked quietly back on the trail.

Chip let out his breath and nodded for Foster to key the handset to warn the main element of 2nd Squad. He flipped the M79 back on safe, took a deep breath, and waited.

Once more, Hearn tapped him on the shoulder to indicate the approach of between fifteen and twenty additional NVA. The main body of the enemy patrol was moving past his position into 2nd Squad’s kill-zone.

Chip found himself grinning. C’mon, Rock, c’mon, he silently urged his squad leader. Waste ‘em. Hearn tapped him on the shoulder again. Another NVA patrol was heading their way. Not good. More gooks. His face hardened, the grin vanished. Do it, Rock. Open up, damnit, open...

As if on cue, Lockwood squeezed the Hellbox. So did Kunze and Dickey. A blinding detonation, immediately followed by two more, roared through the misty night. Three Claymores sent 2100 steel balls screaming in a sixty-degree arc, overlapping and covering most of the NVA patrol.

A split second later Downing gripped the M60’s short nylon stock with his left hand, rested his right cheek against it, and squeezed the pistol grip with his right hand, opening up into the two NVA scouts. From less than ten feet away, 7.62mm red tracer rounds tore into the North Vietnamese soldiers. Firing four and five-round bursts, Downing placed four bullets into the enemy point man before the body collapsed to the ground. The second scout was peppered with three supersonic bullets ripping into his chest, neck and head. The bodies looked like Swiss cheese.

The moment the Claymores detonated, 2nd Squad cut loose from almost point blank range with their Ml 6s. The smacking and thudding sounds of bullets slamming into the bodies was sickening. India 2/2 was turning the enemy into hamburger. Within ten seconds sixteen NVA lay dead, most slain instantly, torn to pieces by the machine gun, Claymores and Ml6s.

A pair of NVA were luckier, at least initially. One, positioned in the rear of the patrol, was cut down by a section of Kunze’s Claymore pattern. Steel balls ripped into his legs, stomach, chest and head, tearing part of his scalp away. Trying to raise himself to flee the ambush, the NVA was only able to crawl on the trail. A second later PFC Loomis put an M16 round into his right hip, crushing the pelvis. Thrown onto his back by the impacting bullet, the NVA lay on the trail, eyes open and staring, unable to move while the sounds of the firefight enveloped the area.

Although he was certain most of the NVA had been slain by the initial Claymore blasts, Lockwood allowed his troops to pour a couple hundred more rounds into the mangled bodies, assuming nothing. 'Cease fire. Cease fire,' he finally ordered. The volley stopped. 'Any casualties?' he yelled in Kunze’ s direction.

After a quick check with Jarvis and Loomis, Kunze said, 'All secure.

'Place is crawling with slants.' Lockwood inserted a magazine in his assault rifle, spit tobacco juice on the ground, and shot an order to Kunze. 'Your team’s rear guard.'

'Dickey, stand by to pull back,' Lockwood said. 'Anything out there is long dead. Time to dee-dee outta here.'

Chip, Foster and Hearn were anxiously awaiting the order to pull back. Their nerves were on edge as they watched for any NVA survivors to their left, or any approaching to their right.

Foster was almost sick with fear. 'When we gonna pull out?' he whispered.

Glancing at Chip’s face, Foster was surprised to see beads of sweat shinning on his upper lip. The burly grenadier was nervous after all. Foster s voice rose. 'How long are we gonna have to wait?'

'Till hell freezes over, or when Rock gives us the order,' Chip snapped. He tried to ease the growing fear within his team. 'Take it easy, guys. Ro

Were troops in Vietnam sacrificial lambs led to the slaughter by an ungrateful nation? Mere cannon fodder? Perhaps. But after reading A Passing of Innocence, Vietnam veterans and their families -- all Americans who cherish patriotic values -- will stand taller. Although written as fiction, this novel is based on the author's tour of duty as a Marine in Vietnam in 1968.

A Passing of Innocence is about camaraderie in Vietnam. Americans fought and died for one another day in and day out in Vietnam. After every firefight, life took on a quality that only those who have faced death could fathom. The air smelled fresher; water, when it was available, tasted sweeter.

Chip Daniels is the main character in this novel. He adjusts to warfare in Vietnam after his first firefight, one in which only nine Marines from a platoon of fifty-five walked out of. The paradoxical twists of war become ingrained in him from day one. The nicest guy you would ever want to meet back in the 'World,' Chip becomes exactly what the Marine Corps intended--a killer. Yet he often contemplates why, while carrying a small Bible in his jungle fatigues, he is capable of killing dozens of North Vietnamese troops without batting an eye. The novel is packed with action: quaking artillery, rocket, and mortar barrages; eerie night ambushes, and intense firefights from beginning to end. On the first page of the first chapter, Chip is pounded to the mud by NVA rockets while at the Rockpile. Chip, along with his fellow grunts in India Company, 3rd Battalion, 9th Marines, slug it out with the NVA at Ca Lu, Khe Sanh, Con Thien, and in the treacherous DMZ. The majority of his tour is simply spent in the bush, having little idea on what unnamed hill he may be fighting his last battle. A Passing of Innocence is highly realistic, intense, and an exceptionally fast read.

Born and raised in Michigan, James Daugherty majored in history at Eastern Michigan University. He served as a Marine combat infantryman in Vietnam, is a former police officer that was assigned to SWAT teams in metro Detroit, and was employed as a private investigator. The author is presently writing an action/adventure/mystery series under the pen name of Kevin Rourke. In addition to A Passing of Innocence, he has written The Capcom Conspiracy, a novel depicting the impending civil war in the United States and a global conspiracy to usurp America's sovereignty, and Iced Obsessions, a crime thriller dealing with NHL hockey and homicide.