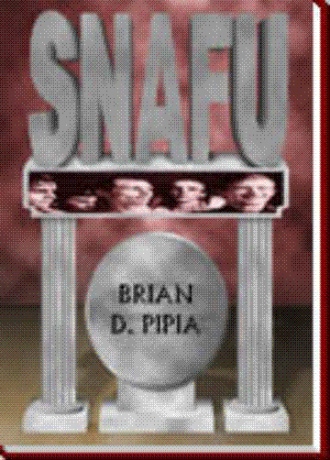 As he was searching for his lost clothing, Scott stopped and then wondered what he was doing with out them on. He was again befuddled when he realized he was on the couch rather than in his bed. He peeked a glance up into his loft and it finally dawned on him-- Oh sweet Jesus, I hooked up with the Keg last night! What the hell was I thinking?!

He moved quickly; shame and self-loathing urging him to get out of the room before his visitor woke up. Scott made a lunge for the door. In doing so he tripped over the phone line, knocking the receiver off of the hook and tumbled forward. He woke both his roommate and overnight guest as he crashed to the floor, sprawling flat on his back . . .

Perched upon the sill was a foghorn, kept there for occasions such as this one. Dennis opened the window and let loose a resounding 'blaaaoooogaah' that died down just as the Keg exited from the front door three stories below. In response to Dennis’ summons, windows from all seven of the other houses that comprised Fraternity Row began to fly open and everybody began searching for the poor girl who had been caught on her 'Walk of Shame.' Dennis gave the horn another brief blast and erupted into the Tap Chant. Much to his delight, the beat caught on and soon everybody was chanting/singing along with him.

The Keg stopped for the briefest moment; a look of deep astonishment on her round face. This was quickly replaced with a visage of sheer horror and she began to run. Her stubby legs propelled her faster than she had ever moved and before long, she had vanished from her antagonists’ sight.

The chanting continued for another minute or so after she left their field of vision and Dennis looked around the Row, reveling in the cruel chaos that he had created . . .

Have you ever gone to college or wondered what your kids are doing while away at school? Have you ever woken up to find a stranger in your bed or had a run-in with the law?

If you have, relive your past through SNAFU. If you haven't, find out what you have missed by living vicariously through the story of four college guys living life large on a typical(?) Saturday.

SNAFU, based loosely on the author's real-life experiences while attending the College of William and Mary, is sure to make you laugh as you relive and relate from one outrageous situation to the next.

This is a work of fiction. Names, characters, places, and incidents either are the products of the author's imagination or are used fictitiously, and any resemblance to actual persons, living or dead, events, or locales is entirely coincidental.

Brian D. Pipia attended the College of William and Mary for four years but never graduated. He currently resides in his hometown of Huntington, N.Y. and enjoys athletics, reading and social activities involving alcohol. His ideal day would entail kicking back with his friends with a good scotch and the Yankees on the tube.