A New Revelation from God 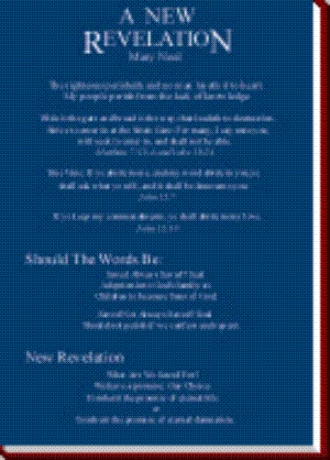 ONE DOCTRINE, THE WORD

We have so many different doctrines in the world today, but what I do not understand is how so many of us can use the same Bible and come up with so many different understandings. Well, in a way, I do. It is because we are just reading and not studying and searching out the Scriptures and most of all, we are not praying and asking God to reveal his truth. We can see by this letter to the saints and faithful that Paul is giving us instructions on how to become a perfect man. Don't overlook the word unity.

A friend of mine and I met with a promoter a few days ago, concerning the play. While we were at the meeting two more people joined our conversation. I was explaining to them how the play was about unity. I said, 'the Scripture says that Jesus hair and head were white.' One person looked at me like I was crazy and another one said, 'what?' I am not sure, but I believe that I shared with them the vision that Daniel saw in 10:6. Somewhere during the conversation we became involved in a debate about how we are being oppressed and about how the Bible was written to oppress a certain group of people.

One of those people involved our discussion made a comment, saying that the only ones following the Bible were those in church. I did not say anything, because I hope he is right. The church should be the pillar and ground of the truth. He did not say this, but I do believe the Bible is only allowed in the jails and prisons in order to keep those who are incarcerated under control. Man knows without some spiritual guidance, their job would be twice as hard. This is why some of our adults and children are out of control, if we cannot teach spiritual and moral virtues in the schools, then we must teach it where it should begin, in the homes and in the churches.

I have heard that religion was removed from our schools systems because there are so many different doctrines. A recommendation, to solve this issue, would be, to get one righteous and faithful minister that believes Jesus is the Son of God from every man called denomination and let them come together and decide what can be taught from the scriptures in the schools. I believe, if they have these principles and qualities, that they will find that they have a lot in common. If they do not know what to teach, or where to start teaching, God even tells us this. There is no way any of these principles could hurt anyone. But they could very well be a blessing to us all.

Any rules or regulations created by man, can be broken. If this is agreed upon, we may start with the book of Deuteronomy chapter 5:6 and chapter 20 of Exodus, cross reference them with Matthew chapter 5 and 22, followed by Mark chapter 10. Make sure that we teach the book of Proverbs and cross reference it with all the above and Revelation which tells us who shall be blessed and who shall be damned.

Once you lie, you are afraid that someone will find out, therefore you are not free. If you tell the truth, you can never make the truth into a lie. If we teach, thou shalt not covet thy neighbour's house, thou shalt not covet thy neighbors wife, or any thing that is your neighbors. Will we hurt anyone? Just maybe, we would have faith in God and not in man. God will supply all our needs. If it is a mate we desire, we do not need another man's headache, we can have one of our own if we just pray, trust and believe.

Anyway, this man was blaming a group of people for all his pain. I say, pain, because anytime someone has hate in their hearts, there is pain. As the discussion progressed others stopped to listen as we spoke, it was, let me tell you, four to one. I was standing all alone, but God was with me. My friend also seemed to agree with them most of the time. One of the participant asked, 'do you know who wrote the King James version of the Bible, and do you know who and what he was?' I said, it doesn't matter who he was. I guess he was converted because the same King James version reads 'none of these shall enter into the kingdom of heaven.' He pressed, 'do you know where the kingdom is?' I knew what he was referring to and answered 'the kingdom of God is in you,' like so many of us we stop reading before we get the entire message and understanding. I said 'there is the kingdom of God, the kingdom of heaven, and the everlasting kingdom.' He said that 'there is no other kingdom. Where do you think you are going, the kingdom is right here.' We will expound on this subject later.

We can see how many of us are being deceived and blinded. Satan can deceive and blind you only if you allow him to.

My friend and also a girlfriend of mine made that same statement a few times. I believe my friend began getting confused spiritually when he went to hear a scientist version of the Bible. He started believing that there is no life after death and there is no heaven or hell, our heaven and hell is here on earth and we are living it right now. There is nothing in the Holy Scriptures to support this belief.

One of the men, went on to say 'you are oppressed. I do not dislike all of them, you tell me I am suppose to love somebody when they try to hurt me and my family?' I said, 'I never said you should not protect yourself and your family.' What I did say was, Jesus said, if ye do not forgive, neither will your Father which is in heaven forgive you; Mark 11:26.' I said, 'Jesus never gave us an excuse to hate.'

There is no justification for this type of behavior. Jesus never said thou shalt, or thou shall or thou should hate, he gave no commandments to hate. Jesus says, vengeance belongeth unto me, I will recompense, and again, 'The Lord shall judge his people it is a fearful thing to fall into the hands of the living God;Hebrew 10:30.' Going all the way back to Genesis where the Lord states whosoever slayeth Cain, vengeance shall be taken on him sevenfold.

I told this man 'this is only reversed discrimination' and one in the group said, 'there you go with that, I don't have the power to discriminate.' 'Well,' I said, 'we do have the power. It is a matter of choice. It takes power to hate and power to love. Jesus says, the kingdom of God is not in word but in power.' One went on to say that the Bible was used to keep a group of people under control. I asked him a question, 'have you ever read anything in the Bible that tells you to love one 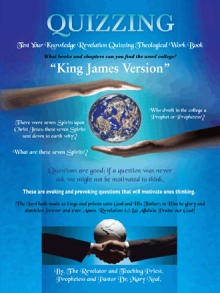 The goal of this book is to bring those who are adopted into God's family and those who are Christians, closer to God and to assist those who are teaching the Word of God. My prayer is that this book will be used in colleges, schools, churches, Sunday Schools, missions and wherever the Word is being taught. In other words, I hope that this book will be used to enlighten the readers and teachers of God's Word. There are many that believe in the name of Jesus but do not know him, his teachings, or the Father. There are so many of us that do not know God for ourselves.

Mary Neal is a soft spoken determined woman, who does not understand the meaning of the word adversity.

She was born in Hayneville, Alabama in 1947, the daughter or Ethel and Gilbert Wiley (both deceased). Mary was introduced to God at an early age, became a member of the church, and was baptized at the age of ten. She sang in the church choir and attended Sunday school throughout her teen years.

After graduating from high school, she moved immediately to Westbury, New York, where she stayed away from church for years. She later attended various churches for several years before finally joining one.

She attended modeling school while in New York and worked at a variety of jobs, ranging from home healthcare to the racetrack. She performed with different local groups and lived there until 1991. She wrote several songs, but now, praise God, 'I only write and sing those things that will give him glory.'

While in New York, Mary joined a company as an operator and was promoted to Inspector, then Section Leader. She was then recommend for Supervisor and was relocated to Waco, Texas where she presently resides. She worked with this company until it was bought out.

Apart from her 'part time job' as a Mary Kay consultant, Mary has kept herself busy by creating CAJF (Create a Job Foundation) and being CEO and founder of W.I.N. (a non-profit organization). She also created a Biblical game called 'Pick Up Your Cross Daily and Follow Me.' Apart from these, she does jail ministry on Sunday plus teaches Bible study on Tuesdays, after volunteering for a tutoring class that teaches children how to read through the computer (CEI Program). Also, she sits on the board of Child Protective Services.

Her family consists of two sisters and one brother. She is the proud mother of one beautiful, successful, twenty seven-year old daughter, Sheila Neal, who is a District Manger in the Texas area for a large retail company. She is a graduate from Florida State University and will soon be married to Albert, on May 16, 1997, in the Bahamas.

Her own questions about the Scriptures lead her to the writing of this book. Armed with the Holy Spirit and a desire to learn, she began this endeavor to help those that have questions and seek answers.

Her message to all is read the Word of God daily, there is no greater joy than to be led by the Spirit of God.