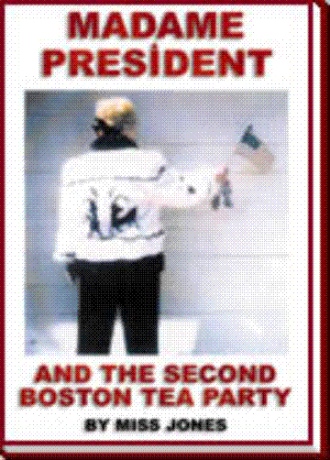 Screaming headlines: office straw vote puts Scarlett in as Presidennt. Followers of 'Steve Jones' break up big time Mayor and Congresswoman Ms. Shredder's home town pre election meeting. Who is this Scarlett? She is becoming like the 'Killroy' signs all over Europe during World War II, saying Killroy was here but no one knew who he was. Does anyone really know who this Scarlett is? A reporter in California says that he knows!

While the Jones's were eating their lunch, the boys three doors down from Scarlett's house started to play baseball in the middle of the street. One of the bigger boys hit the baseball with a smack. He was nicknamed 'slugger' as he was such a 'heavy hitter'!' The ball went sailing through the air over the boys' heads and slammed through Dan's van windshield and onto the steering wheel with unusual force. There was a loud explosion and the van blew up scattering chunks everywhere and then what was left of the van started to burn. The boys ran screaming into the house to tell their parents what had happened. Their parents and everyone on the block and for several blocks over ran outside of their homes to see what had exploded. Scarlett's guards warned them to stay inside and they rushed outside to see what had happened. Their three guards next door dashed over to protect Scarlett and Dan. Jim, one of their Secret Service guards rushed back into the house to call the Washington offices of the Secret Service.

Then he told the Jones's that, 'It looks like someone thinks you just might 'get to be the president'. They hoped to kill us all when we got into the van. At best they have sent a 'scare message' to you Scarlett. Also one for us, to be more careful about our cars we are to ride in.'

Our country has been headed down the path of 'Socialism since the Roosevelt Days.' For the most part, Democrats and Republicans have put up a very poor quality of men before us to run for the President. The most important person in the 'Free World.' I wrote this book to show them a 'Third Party' woman or man could get elected when the American people get 'MAD' enough to throw them all out of office. Almost 50% of their wages are going for taxes to pay for their 'SOCIALISTS SCHEMES' and their 'ONE WORLD GOVERNMENT,' (they hope). Both husband and wife have to work while children are raising themselves.

I have had it with the 'Co-Presidents' and their cronies and fellow traveling socialists in 'OUR WHITE HOUSE.'

I'm mad as hell at the Democrats for knowingly putting this bunch in the White House. His reputation and speeches were known over the years. The excuse that 'they didn't know,' doesn't fly!

The press has knowingly covered up for his and their socialist ideals over the years. Many living it up like he does.

I am grateful to the Republicans who stood up to him and 'IMPEACHED' him. I am 'livid' that all of the Democratic senators and five cronies 'cowardly' let him 'SKATE' scott free!

The Chinese have stolen many of our secrets over the years. The President knew yet he gave his OK for Lorale and Hughes Co. to sell 'VITAL INFORMATION FOR MILITARY USE ON THEIR MISSILES,' (pointed at us) in exchange for 'boodles' of money for the Presidents re-election. Are we talking 'TREASON' HERE? Mr. Hughes, a patriot, must be rolling over in his grave over the sell out of our country for money!

President Clinton has become the 'FUHRER' of the Democrats and their fellow travelers who cover up for him. The so called 'Spinmisters' (liars).

Read None Dare Call It Treason by John Stormer; The Naked Communist and The Naked Capitalist by W. Cleon Skousen and Mein Kampt by Alolf Hitler. They all document the plans to take over America way back in the twenties and in the Unions of that day. Just change the names in these books to see exactly what is going on now.

'WAKE UP AMERICANS, IT IS LATER THAN YOU THINK.' Bombard your Congress with 'TEA BAGS' and letters telling them you will join with other 'PATRIOTS' for another 'BOSTON TEA PARTY' and to vote them all out of office if they don't stand up for 'AMERICA FIRST' and our interest first!

We have a President who ran to Russia to demonstrate against our military men in a shooting war and arrogantly burned 'OUR FLAG.' He now sends our wonderful military men and women all over the world in harm's way saying 'we might have some casualties but it is worth the risk!' (not his of course). No 'ground troops;' (more smoking mirrors). We have the Clintons running all over the world, throwing 'your' hard earned tax money at 'THEIR' problems. At home, Mr. President flies all over this country in his special plane raising 'boodles' of dollars for himself and the Democratic party. He makes all kinds of grandiose promises, (lies and smoking mirrors). As does Mrs. President.

'KINKY SEX' in or near 'OUR OVAL OFFICE.' This is apparently a life long pattern of 'ADULTERY, TWO RAPE CHARGES, LIES AND COVER-UPS, AND SECRET EXECUTIVE ORDERS BEHIND CONGRESS BACK.' When does he have the time to 'do business that the American public elected him to do?'

'WAKE UP AMERICANS,' THE HOUR IS LATER THAN YOU THINK.

Thank you for reading my 'historical novel'... Please pass it on to your friends to read. 'GOD BLESS THIS COUNTRY AND THOSE WHO WILL STAND UP FOR IT!'

I lived through the Great Depression, World War II and have watched our Presidents and congress many times perform badly these past fifty years. Surely the Republican and Democratic parties can find more honest and moral men and women to run our country. Many Americans are now looking at other party candidates seriously. When almost 50% of our wages go for taxes (much of which is squandered), the American people have had it. Especially with this adulterous, lying, scheming, arrogant, politically correct (nonsense) President and his wife.

I wrote this book in the hopes of waking the American people up to what is being put over on them. I don't care if it is called Fascism, Nazism, Communism or Socialism, it's all the same. Total control of your life from the cradle to the grave. Freedom to choose for one's self be dammed! Not for me, thank you! NO ONE WORLD GOVERNMENT EVER!